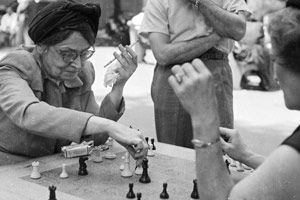 In 1993, a screenwriter staked his burgeoning career on a movie about chess. His name was Steven Zaillian, and he might be the most important man in Hollywood you’ve never heard of: In the two decades since, he’s written (or cowritten) adapted screenplays for Schindler’s List and Clear and Present Danger and A Civil Action and Gangs of New York and Moneyball and The Girl With the Dragon Tattoo. His track record is not perfect (his adaptation of All the King’s Men, which he also directed, is considered a Heaven’s Gate-level Hollywood failure), but he is one of the few screenwriters capable of freeing a film from the shackles of literary tyranny — a reasonable case could be made that at least two of Zaillian’s screenplays defy the cliché and are actually better than the book (exactly which two is an argument for another day).

That film Zaillian wrote and directed, Searching for Bobby Fischer, is one of the best sports movies of the past 20 years. It doesn’t matter if you want to engage in the facile (and ultimately useless) argument that chess is or is not a sport: Searching for Bobby Fischer quietly captures the rhythm of competition and the rigors of children living up to “adult” expectations as well as any film I’ve ever seen. It was a critical success (if not a commercial one), and it has become something of a cult classic, and for many people it is the only interaction they’ve had with competitive chess. It is such a good movie, in fact, that it has managed to obscure the book it is based upon, and this is a shame, because Fred Waitzkin’s version of Searching for Bobby Fischer is a quiet little masterpiece of its own.

I don’t know if Searching for Bobby Fischer was ever a best seller, despite the film’s rave reviews; if it was, I can’t find any record of it. But I do know that Waitzkin’s book deserves to be reissued in something other than one of those cheap Hollywood tie-in covers featuring the skilled young actor who played Waitzkin’s son (Max Pomeranc, who dropped out of movies after 1995) hiding his face; it deserves its own identity as something other than fodder for a screenplay.

A few years ago, when I made the curious decision to write a book about competitive high school chess players despite not really knowing how to play chess, the first thing I did was buy Waitzkin’s book, a memoir of his son Josh’s experiences as a high-level player (at that point, I hadn’t seen the movie, either, though at least 80 percent of the people I told about my project mentioned it to me within the first 30 seconds). Waitzkin’s writing is subtle and smart and funny and warm, so intimidatingly well done that I had a few paranoid episodes during which I thought about giving up on my book altogether. It is the kind of book that (like Darcy Frey’s The Last Shot or Susan Orlean’s The Orchid Thief) draws you slowly into a subculture until you find that you don’t want to leave. Here is one passage, Waitzkin adroitly observing his own observations of his son when Josh is at his best: “But when he’s playing like this, I don’t follow the moves. I ride on top of the game, relishing the emphatic way he snaps a pawn ahead, the flash of his eyes, the assurance on his young face, the bright neatness of his plan.”

Waitzkin’s book begins in the spring of 1984, at the National Elementary Chess Championship in Syracuse, N.Y., where two fathers fall into fisticuffs before a tournament organizer throws all the parents out of the room. From there, it meanders across New York City, across the country, and across the world — to youth chess tournaments in Charlotte and world championship chess tournaments in Russia and to California, where Waitzkin literally acts out the title, tracing the footsteps of Fischer, the greatest American chess player who ever lived. It is a book full of weird and colorful characters like Bruce Pandolfini, who was played by Ben Kingsley in the movie, which only seems like a peculiar casting choice if you’ve read the book. “Certainly in the traditional sense I’m a failure,” Pandolfini tells Waitzkin. “In our society a chess teacher is not considered in the same league as a professor of chemistry or mathematics. … My mother still asks me when I’m going to get a serious job.”

When I was doing my own research, a full 15 years after Waitzkin’s book was published, I found that a lot of things about the New York chess world hadn’t changed at all. That’s kind of how it is in those circles; many of the people Waitzkin came across were still hanging around and/or struggling with their identities when I peeked my head into their universe. I interviewed Pandolfini at his apartment (he was still teaching chess, and still almost comically humble), and I met up with Josh Waitzkin at a coffee shop in Manhattan. (Josh got over his post-prodigal anxiety, became a world tai chi champion, and was at the time writing his own book, a memoir/self-help tome about the learning process. He seemed incredibly stable and well adjusted.)

I’ve never actually met Fred Waitzkin, and I don’t know a lot about him, except that he later wrote a memoir about deep-sea fishing and a biography of Garry Kasparov. I assume he was happy with Zaillian’s movie, because it’s an excellent film and it really does capture the essence of what he wrote. But it always feels like a shame when a good movie manages to overshadow an equally good book, because there are so few of both in this world.