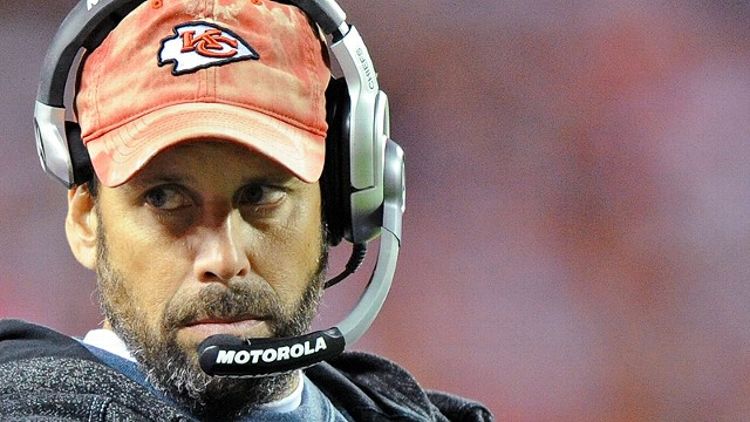 At least that seems to be true for coaches, unless you’re Jim Fassel, whose Las Vegas Locos, by the way, lost the United Football League title to Marty Schottenheimer’s expansion Virginia Destroyers this year — after which Schottenheimer was interviewed for the Buccaneers’ open coaching slot. That would have been Marty’s fifth head-coaching gig.

In the real world, if someone runs a business into the ground by serving warmed-over hot dogs actually made of Labrador filet, the 7-Eleven across the intersection street doesn’t snatch him up to whip their place into shape. If NBC cancels Paul Reiser’s show after two episodes, Comedy Central doesn’t grab him to write jokes with Jon Stewart. But in the NFL, if someone gets fired for incompetence (usually two years too late), does a competing franchise immediately hire him? Well, yeah! Every year!

If Todd Haley felt the need to scan the ceiling for bugs (the CIA kind) before giving an interview four days before he was relieved of his coaching duties by the Chiefs in December, who are we to say he didn’t have good reason to be paranoid? Maybe GM Scott Pioli, a former protégé of Bill Belichick, had simply taken the Pats coach’s surveillance tactics to a new level. Massive operations tend to want to know what the lieutenants are thinking. (If I were you, I’d abandon landlines altogether.)

Haley’s woeful Chiefs posted a 5-8 record before he was fired — but he didn’t stay unemployed for long. This month, the Pittsburgh Steelers announced that they had hired Haley as offensive coordinator.

This year, my own personal favorite NFL recycle is Bill Callahan. In his first year as Oakland’s head coach in 2002, Callahan reportedly didn’t change former boss Jon Gruden’s signals, and the Raiders got stomped when they faced the Bucs in Super Bowl XXXVII. Then, after Al Davis let him go, Bill Cornhuskered to Nebraska, then graduated to the Jets — spending a few years as offensive coach on a team with the mental stability and toughness of the offspring of Dexter, Gregory House, and Boo Radley. Then last month, the Cowboys hired him to be the offensive coordinator of a unit featuring the stable likes of Dez Bryant.

Elsewhere around the league: Tony Sparano joined Rex Ryan’s Jets after he was fired by the Dolphins, and Jim Caldwell — sacked in Indy after a miserable season — will be Baltimore’s QB coach next year, and Brad Childress found a new home with Pat Shurmur and the Browns.

But the more you look at the new crop of alsos, to try to decipher the rationale behind this year’s group of recycled coaches, you have to go back to The Graduate, don’t you? To the scene where Benjamin tells Mr. Robinson that he and his daughter Elaine are going to be married, but that Elaine doesn’t know about it yet?