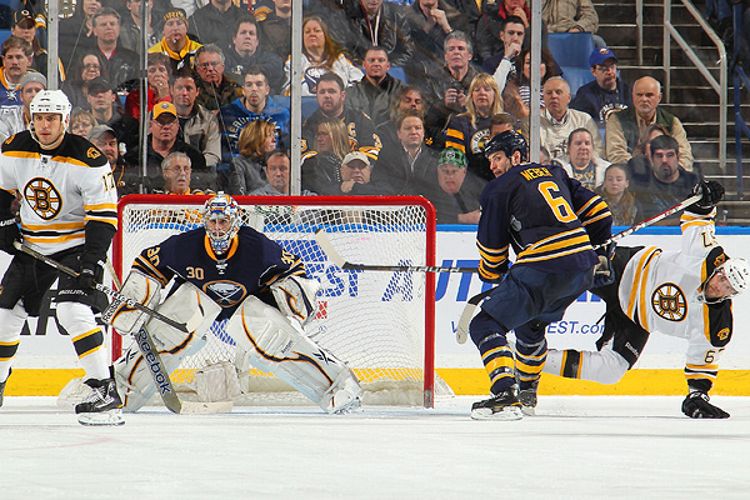 In HBO’s 24/7 series on the Rangers-Flyers Winter Classic, there was one interaction between a player and an official that made it pretty clear how certain things go down. After the Flyers’ Max Talbot gets whistled for not having done much in particular and expresses his displeasure to the ref, he gets a candid response: “I told you you were gonna get one, Max.” Later, he clarifies: “That was a bad call, but sometimes you accumulate things.”

Well, glad that is settled. There was no clearer example of it in action than on Wednesday night in a game against the Buffalo Sabres and the Boston Bruins. Milan Lucic appeared to score a first-period goal to tie the game 1-1, but it was waved off — Rich Peverley, officials felt, had interfered with Sabres’ goalie Ryan Miller.


The Sabres would go on to win 6-0, making the call seem somewhat trivial, but a tying goal could have been a momentum shift. At any rate, it was a clear makeup call, an attempt to send a message about the kind of play that happened earlier this year when the two teams met and Lucic plowed full steam ahead into Miller (and, you could argue, into the Sabres’ season) with scarcely any repercussions.

Miller himself admitted it: “I think it might have been that Boston couldn’t touch me tonight,” he said after the game. “Just the way things have played out in the last few months, I think I definitely got the benefit there.”

But there was more than just a simple makeup call at work. One day earlier, an ostensible game-tying goal by the New York Rangers against the New Jersey Devils in the final seconds was disallowed owing to interference with Martin Brodeur, leaving John Tortorella (and Al Trautwig) furious.

The Devils-Rangers play was far less cut-and-dry than the Bruins-Sabres one had been: It appeared, based on the arcs of snow rising from Marian Gaborik’s feet, that the Rangers forward was trying to stop, and was pushed into the Devils goalie against his will. Ah, but another angle made it seem as though Devils defenseman Anton Volchenkov was actually moving away from the net. Who’s to say? It’s not like these decisions are reviewable, anyway.

Tortorella would like to change that. The coach issued a “no comment” on the call after the game, but a day later he had an idea. “I think the NFL gets it right,” he said. “In the last two minutes, it’s a booth replay to get the call right. I haven’t thought it all through. But maybe the last minute of an NHL hockey game, get the call right.”

These days, goalies already deal with higher and harder shots, the unpopular trapezoid … now, a new wrinkle: the baffling and ever-shifting set of parameters for what might or might not constitute goalie interference. The league has clearly sought to crack down on contact in the wake of Lucic using Miller as a human bowling pin. People argue that reviews won’t work, as they’d be based too much on human judgment. But the calls on the ice are already tainted with opinion — an opinion that one was forced to come to at wham-bam-thank-you-ma’am hockey speed.

The ability to review an on-ice call wouldn’t eliminate controversy and would probably just stoke it; a play like the one in Devils-Rangers could be looked at by 10 different people and sustained and overruled in equal measure. But do you really want a call like the one in Bruins-Sabres to take place when we get to the playoffs? (I suppose they’d make it up to you one day if it did.)

In other news in net:

Which was, as several people pointed out, reminiscent of a similar move he’d used against San Jose in 2009:

Yahoo’s Sean Leahy had a simple crossover wish: “One day, we need an NHL goalie to do the real Rene Higuita scorpion save.”