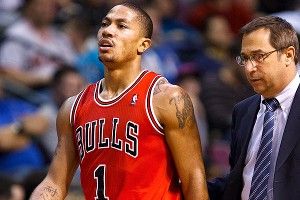 If you had told me prior to the start of the NBA season that six of the top seven players on my fantasy team would be forced to look for in-network coverage during the season’s first month and a half, I would have expected my season to be over before it almost didn’t begin.

But in the year when depth is king and nightly chaos reigns supreme, it means I’ve got the only undefeated team left in my 12-team league.

Take a look at that list of players again. With the exception of the doubly injured Rose, none of these guys are having a particularly memorable season. In fact, if you’ve seen their names in the news at all, chances are it was followed by the phrase “may miss some time.” So though my team is winning, it’s the sum that’s doing the winning, not the parts. Which is exactly what’s happening in the actual NBA this season.

In the Eastern Conference, right behind the expected top two, the Heat and Bulls, are the Pacers and Sixers, a pair of teams that make up for lack of star power with an impressive collection of fresh legs. In Philly, there are eight players averaging over nine points per game, and in Indiana, it’s seven.

Same goes out West, where the Nuggets, Grizzlies, and Blazers each have six players averaging double-digit scoring — and everyone’s new favorite team in Minnesota has six guys scoring more than nine points a game, which doesn’t even include cult figures like Derrick Williams, Wes Johnson, Wayne Ellington, Darko, and the predominantly out-of-service roller coaster that is Anthony Randolph.

What does this mean for your fantasy team? It means that star power is hard to come by, and you need more healthy bodies than ever. It also means you’re probably in decent shape if you saw this more-the-merrier rotation-bingo trend coming.

But if you pretended that this season was business as usual, and grabbed former fantasy stars like Gerald Wallace, David West, Kevin Martin, and Andre Iguodala, you’re probably not doing so hot. Wallace, for instance, hasn’t put up numbers this low since his first year with the Bobcats, which also happened to be the first year of the Bobcats.

The problem with Wallace and even younger guys like Paul George, Jrue Holiday, and anybody in a T-Wolves jersey who doesn’t speak Spanish or have family reunions featuring Beach Boys, is inconsistency. On any given night, they can be the man, or just a man.

So in order to win this fantasy season, you need to be able to balance guys like this with guys who’ve been performing on a regular basis. The ones with a role nobody else on their team can fill, who are impervious to a coach forced to juggle minutes in new and creative ways.

Guys like Paul Pierce. Going into the season, people expected Pierce to take it easy. But how? The only other consistent scorer on the Celtics is so old, he went to college with Donyell Marshall and Doron Sheffer. The team needs points, and Pierce is where they come from.

And yes, Kris Humphries is a dick. But he’s also the only guy on the Nets who can get a rebound. In fact, the reason you can’t name another Nets player with over five rebounds per game is because there’s only one. And I shit you not, his first name is Shelden.

No matter what, the no. 1 thing it takes to win at fantasy sports is luck, and anyone who tells you otherwise is probably Matthew Berry. But in this goofy NBA season, depth almost trumps luck. This week alone, Derrick Rose, Carmelo Anthony, Danilo Gallinari, Kyrie Irving, Kyle Lowry, Spencer Hawes, and Chauncey Billups have all been victim to the injury bug.

Maybe you relied on one of these guys, and maybe you didn’t. But if you don’t have a solid backup or two, you’re no better off than the Bobcats.

Depth and luck have are why my team is undefeated thus far, though this week, I’m losing. One reason for this is Rose’s sudden back injury. Another is Brandon Jennings coming back to Earth. A third is that I’m playing a team starting a point guard with an economics degree from Harvard who entered the week without an NBA start on his résumé.

So the thing I said about depth almost trumping luck? Yeah, never mind that.