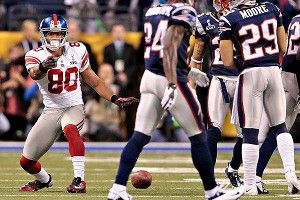 The Super Bowl was days ago. I’m still cranky. Depressed. I’m mad at football for ending. I’m mad I won’t be able to risk ⅘ths or more of my paycheck on a three-team teaser for another seven months. I’m mad that my least-favorite team in sports has been crowned champions. Most of all, I’m mad that my favorite team in sports — while not having played in the big game (not even close) — is directly responsible for this crappy end result.

If you remember the tragic events of December 11, my Cowboys were up 12 points with less than six minutes left. They would’ve put the Giants out of their misery, if not for a valiant-but-gimpy Miles Austin losing a Tony Romo pass in the lights. Yep, Jerry Jones spent more than a billion dollars on a state-of-the-art stadium and his team was done in by about 3,000 watts.

Funny how it works — but that’s all the Giants really needed. That, and a fluke 99-yard reception against the Jets, a Hail Mary pass against the Packers following a penalized play where they were trying to run out the clock before the half, Brady’s biggest target showing up 6 percent healthy for the big game, and two calls for having too many men on the field that benefited the Giants, even though one was actually called against them. And just like that, Big Blue is hoisting the Lombardi Trophy yet again.

Yes, I have a bitter hatred for the Giants. As bitter as any New York native could possess. My question is — why don’t I have any passengers on my bandwagon of hostility? Why don’t more people hate this Giants team? I realize it’s adorable to make the despicable Cowboys your favorite team to despise, but what’s the point? We’ve won one playoff game in 15 years. This is like taunting Charlie Brown when Lucy snatches the ball away from him every time he attempts a kick. You should take no joy in this routine pathetic event.

It’s time to move on. Time to shift your animosity toward the New York Giants. A team that’s had three miracle Super Bowl runs in the last 22 years. (You know how many miracle runs your team has had? None!) A team whose fans are so obnoxious, they make Tea Party activists look sympathetic. A team who boasts an emotionless quarterback and an owner whose luxury box has become more Hollywood than a Harvey Weinstein Jacuzzi party.

I’m not asking you to stop hating the Cowboys. Heaven forbid. Just hate the Giants more. Now, please excuse me while I spend the next 202 days watching highlights of Terence Newman trying to tackle receivers using only his Livestrong bracelet.