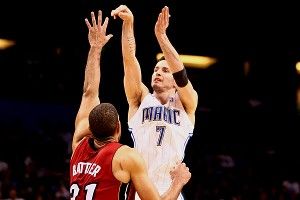 The Miami Heat have one of the NBA’s best defenses. According to Synergy Sports, the Heat give up 0.882 points per possession, which is the 10th best in the league. Miami’s defense is strongest near the rim, where they hold opposing teams to 57.3 percent shooting (which is low for shots like layups and dunks) on 25.3 attempts per game. Teams find more success against the Heat, however, when they stretch out the defense. Miami’s opponents have started to figure this out, and they are attempting more 3-pointers. Heat opponents shoot 21.8 3-point shots per game, and 3s make up 26.8 percent of their opponents’ shots — in both categories, the most in the NBA. Allowing so many 3-point shots isn’t inherently a problem. The problem is that Miami’s opponents are making 36.6 percent of them this season, which makes Miami the eighth-worst team in the NBA at defending the 3-point line.

In Wednesday’s 102-89 loss to the Orlando Magic, 42 of the Magic’s 83 field goal attempts were 3s, and the Magic made 17 of them. Orlando loves to surround Dwight Howard with shooters and jack up 3-pointers. They average 32.3 attempts per game from beyond the arc. But even for the Magic, 42 3-point attempts is a lot.

Why do the Heat give up so many 3s? It has to do with the way they guard the pick-and-roll. Miami’s big men show hard on ball screens while using a guard to “tag” the cutter. Those strategies combined lead to open shots on the perimeter. They also tend to over-help and ball-watch on post possessions. Let’s look at the tape. 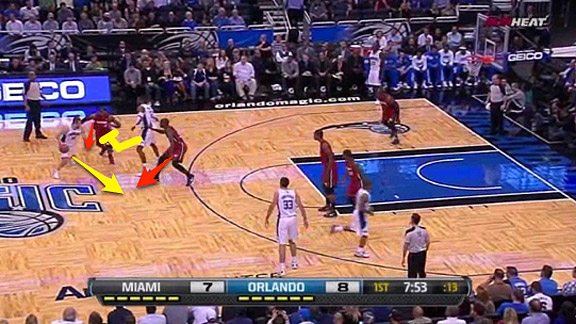 On this possession, Hedo Turkoglu uses a Dwight Howard ball screen and dribbles to the center of the court. Joel Anthony shows hard on Turkoglu as LeBron James, Turkoglu’s defender, fights over the screen. 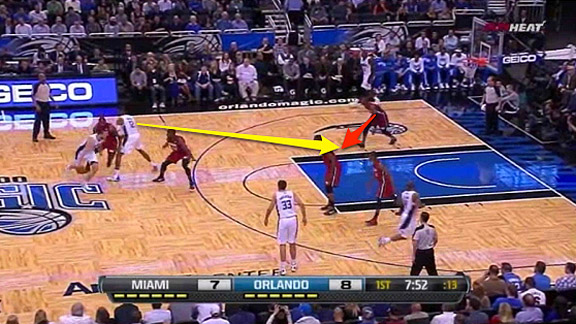 When Turkoglu passes the screen, Howard turns to roll to the rim. Because Anthony continues showing on Turkoglu until he picks up his dribble, another Heat player must rotate to keep Howard from rolling to the rim uncontested. Dwyane Wade leaves his man in the short corner to cover Howard. 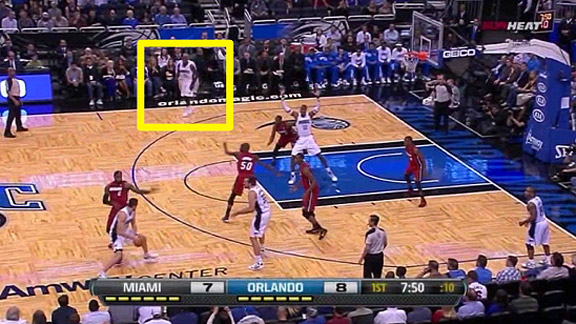 Anthony’s hard show serves its purpose. It prevents Turkoglu from getting to the middle of the floor and forces him to pick up his dribble about 40 feet from the basket. When Anthony returns to Howard, he needs to bump Wade back to his man. But Wade hangs around a second too long, and that leaves Jason Richardson wide open behind the 3-point line. 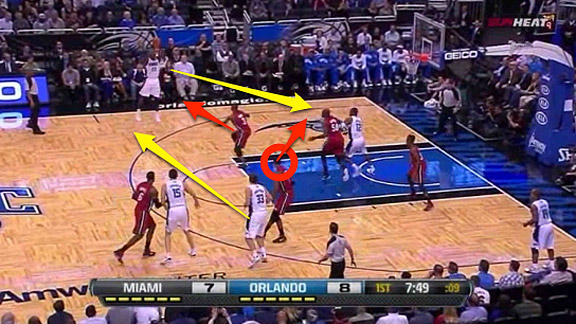 Turkoglu passes to Richardson, who is a 34.8 percent 3-point shooter. Wade closes out, but because Richardson is a perimeter threat, he closes out too hard. This allows Richardson to drive to the baseline, and the Heat defense is forced to scramble to stop him from getting an easy basket. During the confusion, Chris Bosh loses sight of his man, Ryan Anderson. Anderson catches Bosh ball-watching and sprints across the court to set up for a kick-out from Richardson. 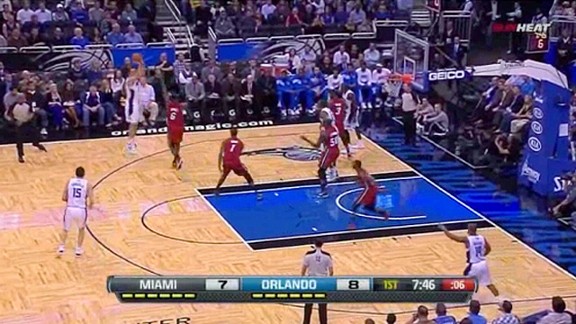 Richardson passes to Anderson, who knocks down the 3-point shot before James can contest it. Here, Miami’s hard show didn’t lead directly to a 3-point attempt, but because Wade had to drop off Richardson and then close out so hard on him, Miami’s defense broke down and the Magic got a great look for Anderson, who shoots 43 percent from 3-point range. 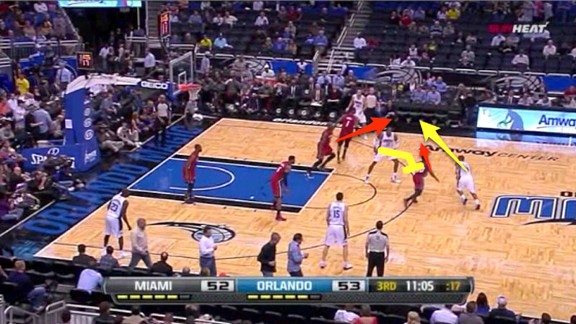 In this possession, Jameer Nelson uses the ball screen. Once again, Anthony shows hard as Nelson’s defender fights over the screen. 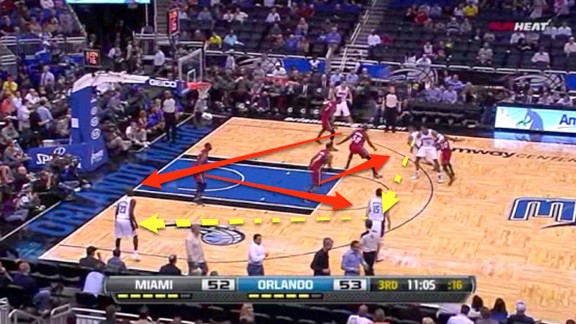 Just like before, a helper must rotate to prevent Howard from getting a wide-open dunk. This time, James provides the help. He meets Howard very early in the roll, before Howard even reaches the paint. Once again, this leads to a breakdown that puts the Heat in scramble mode. With four defenders on one side of the court, Wade is left to guard both Richardson and Turkoglu on the weak side. Nelson reverses the ball to Turkoglu on the wing, and Wade closes out on him. A quick touch pass sends the ball to Richardson, who’s wide open in the corner. 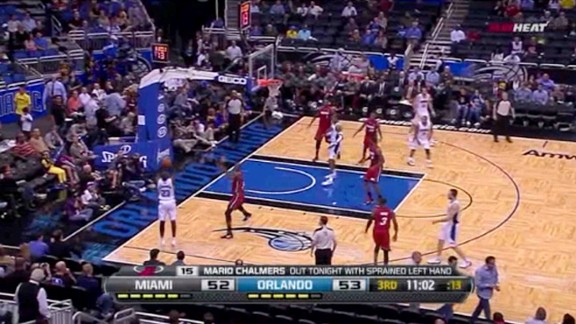 Anthony tries to close out, but he’s too late, and Richardson knocks down an open 3.

In addition to pick-and-roll situations, the Heat also struggle to defend the 3 when opponents play inside-out. The Magic, who have one of the game’s best interior players in Dwight Howard, were able to exploit this to get open 3s. 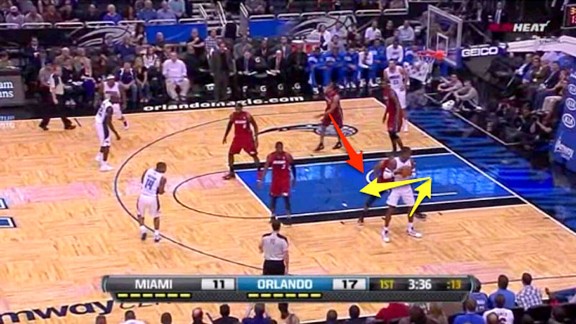 On this possession, Howard gets the basketball in the post and starts toward the baseline before turning to the middle. Shane Battier comes through the center of the court to double Howard. 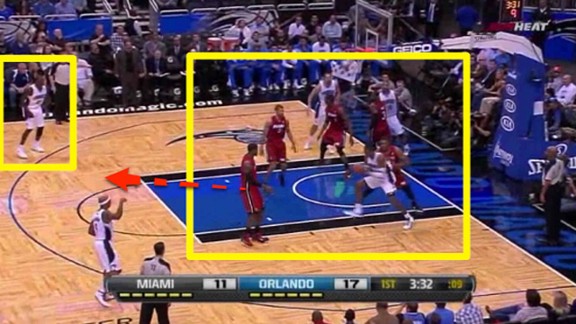 When Battier doubles the post, Miami’s other defenders need to rotate to the man who Battier left to double-team Howard. That doesn’t happen on this possession. Instead, the Heat stand around and ball-watch. Look at James in the image above. He rotates over with his man, but then turns and stares at the ball. 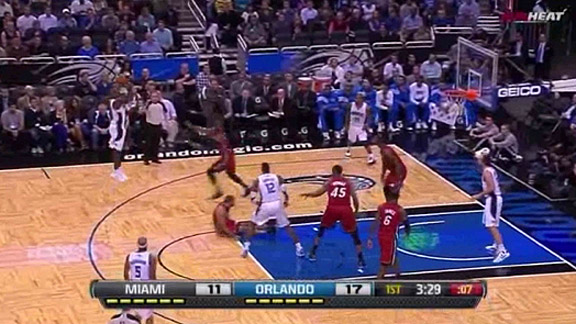 James should anticipate the double-team and the kick-out pass and position himself more or less equidistant between of the Magic’s two perimeter shooters. He fails to do this, and Howard spins and then passes to Richardson for another open 3. 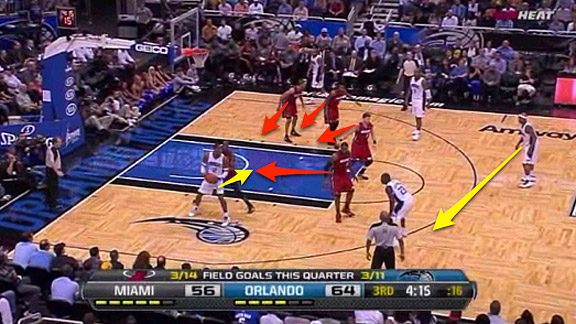 We pick up this possession after Howard has received the ball in the post. This time he makes a move straight to the middle. As soon as Howard catches the ball, Miami’s four help defenders inch closer to Howard. After making the entry pass, Jason Richardson clears through to make space for Howard, and Quentin Richardson slides to the wing for a possible kick-out pass. 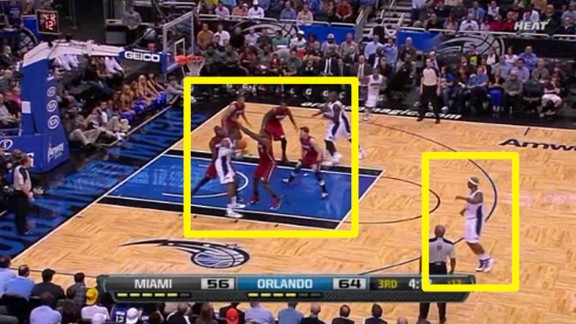 As Howard starts his move, James meets him for a double-team, and all five Heat defenders drop into the paint to stop Howard. This leaves Quentin Richardson wide open. 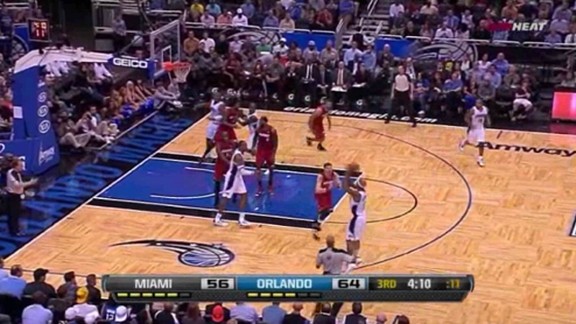 Howard kicks it out, and Quentin Richardson releases a 3 before Mike Miller can get close enough to bother his shot. It sail through the net for another of Orlando’s 17 3-pointers.

Heat fans might think that this is just how Orlando plays. When they’re making shots, any NBA team would struggle against the Magic’s inside-out attack. This is true, but Miami has struggled to defend the perimeter all season, not just against the Magic. Watch the video below, and see the Heat make the same defensive errors against the Cleveland Cavaliers, Toronto Raptors, New York Knicks, Milwaukee Bucks, and Philadelphia 76ers.

Time after time, wing help on pick-and-rolls leads to open 3s. Double-teaming the post leads to ball-watching and defensive breakdowns. How can Miami improve? They should continue showing hard on ball screens. They have mobile bigs like Udonis Haslem, Bosh, and Anthony, who execute it perfectly. I think they should change who helps on the roll man. The Heat usually rotate a wing defender to stop the roll. Instead, Miami’s second big should help as their wings stay home on perimeter shooters. This will require more communication between the two big men, but it could neutralize both the roll and the 3-point shot.

When defending the post, the Heat just need more discipline. Too often, Miami’s help defenders sink too deep on post moves and allow easy kick-outs. If they choose to double-team the post, then double with one defender and rotate out of it. If they choose not to help in the post, the remaining four defenders need to stay home. The Heat have some of the NBA’s most athletic defenders, capable of making dynamic plays that lead to easy baskets on the other end. If they tweak their pick-and-roll strategy and play a little smarter against low-post threats, they could also have one of the league’s most stifling fundamental defenses.