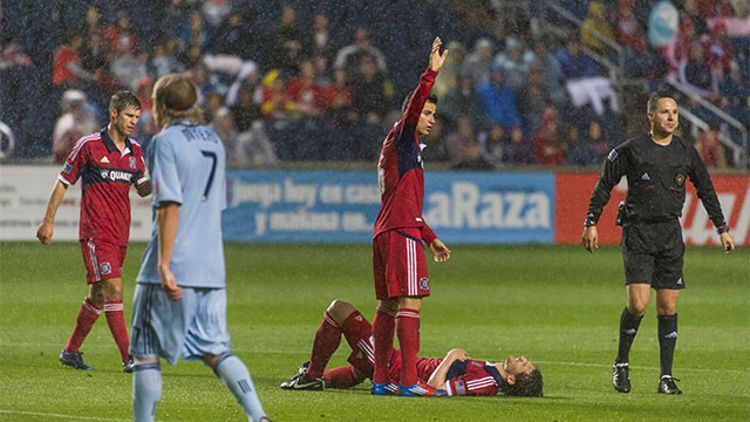 Earlier this year, after a particularly fractious clash between Sporting Kansas City and Real Salt Lake, I wrote a piece calling this MLS’s most interesting rivalry — not the fiercest, not the most historically relevant, but the most interesting. Why interesting? Because it had arisen out of the way the teams play. Now we have the chance for a very public referendum on which style works better, as the two clubs are due to meet in the MLS Cup final at Sporting Park on December 7.

How did they get there? Sporting came from behind to finally shake Houston Dynamo’s playoff hold over them on Saturday, while on Sunday night RSL went into Portland, kept a clean sheet, stole a goal, and cradled a frustrated Portland team as the Timbers punched themselves out.

Looking back on what I wrote after Sporting stole the points in Utah back in July, it’s clear that calling games between the two a “referendum” is not that far off. This is certainly how RSL in particular see it. RSL general manager Garth Lagerwey was pretty outspoken on the distinctions between the teams, at least once he’d inserted the obligatory caveat about the club he used to play for (“There’s a lot to like about Kansas City and I certainly wouldn’t want to give an impression contrary to that”). As Lagerwey saw it:

“We play diametrically opposed styles of soccer. We want to keep the ball, we want to possess, we want to attack. Kansas City want to kick people, pressure you all over the field and try to rely on set pieces and turnovers to generate their chances. It’s really an interesting rivalry in terms of where the league wants to go. To use facts: Kansas City leads the league in fouls committed by a wide margin. They wear their style on their sleeve. They’re going to come in and try and intimidate and impose their style and even beat you up a little bit. They’re not shy about that, they’re proud of it. So I think the league has to decide do they want that kind of physical, rock’em-sock’em style, or do they want to play more of a passing, possession, beautiful game. And I think that’s really why the rivalry comes into focus, because you see these two different directions the league could go.”

As might be expected from an informed but partisan perspective, there are elements of truth in what Lagerwey says, but it also slightly glosses over the physical component of his own team’s play. It’s not all delicate tiki-taka at Rio Tinto Stadium. RSL’s playoff progress was as contingent on the defensive (and occasionally offensive) pairing of Nat Borchers and Chris Schuler, the game-reading interventions of Kyle Beckerman, and the decent-footballer-for-a-goalie Nick Rimando, as it was on the control, vision, and touch of Javier Morales at the tip of their midfield diamond.

That’s not to say that when you look at RSL’s playoff performances in isolation you can’t make the Lagerwey-favorable claim that Morales has been the MVP so far. In both games against Portland he overshadowed the contribution of his feted Portland counterpart Diego Valeri, not just with his individual play, but by almost single-handedly controlling the tempo. Portland love to create pressure cooker games — blocking the passing lanes through midfield, harrying, breaking, and launching wave after wave of attacks, almost using the building crowd noise as a cue for when to score. And in the second game, RSL, and Morales in particular, just picked their moments to release the head of steam. The fact that they scored on one such counter, when the poacher Robbie Findley (another player who loves playoffs) pounced first on a loose ball, was almost (almost) not as important as the way in which Morales would repeatedly pick his moments to start an RSL attack and remind Portland that there could be dire consequences for them trying to camp in the RSL half.

Yet Portland kept coming, and that’s where the other half of the RSL equation comes into play: Borchers and Schuler were beasts at the back — the latter in particular really announcing his arrival on the MLS stage. A lot of the focus on this so-called RSL transitional year has been on how the midfield and attack would slot together, but actually the way that Schuler has stepped up and filled the big shoes of Jamison Olave has been as successful an individual story as any in the league this season. Scoring vital goals against L.A. and Portland in the playoffs certainly didn’t hurt in getting him attention, but it’s his excellent game-reading tackles to prevent shots on goal that we’ll remember from these playoffs. For all their pressure in the second leg, Portland had only two shots on target.

Speaking of shots on target, there’s a player in a Sporting Kansas City shirt who’d slot right into Lagerwey’s vision of RSL, one who hasn’t had any shots on target in his last three playoffs and who may just be overdue for a big game.

I’m talking, of course, about Graham Zusi. Along with Benny Feilhaber, another player whose touch and inventiveness would be approved by RSL, Zusi tormented a Houston Dynamo team whose best chance of progressing probably vanished when it became clear Ricardo Clark couldn’t take to the field.

Without Clark to win the ball, read the game, and balance out Houston’s midfield, Warren Creavalle was hopelessly stretched in the defensive midfield position, as Zusi and Feilhaber floated around looking for space and exploiting it. Brad Davis and Giles Barnes did their best to compensate, but they’re not on the team for their defensive play, and too often ended up on the same flank anyway. Houston did take the lead early through Boniek Garcia, but after Zusi’s interception on Barnes that led to the equalizer, Sporting always looked the more likely winners. And once Feilhaber and Zusi combined to help put Sporting ahead in the second half, there was only going to be one winner. Oh, and Zusi had a couple of powerful runs and shots as well — just not on target.

To revisit Lagerwey’s claims about Sporting, yes, their goals were forced in part from pressure on the ball, but the team also needed creative finesse at times. For all their avowed differences, there’s a little more of each other in these two teams than each coach might admit, and if the final is a referendum on style, it might be worth checking the ballot twice to make sure you’re voting for the right team. It’s going to be a fascinating contest. In short, we might not have the most glamorous final, but we have the most interesting one.