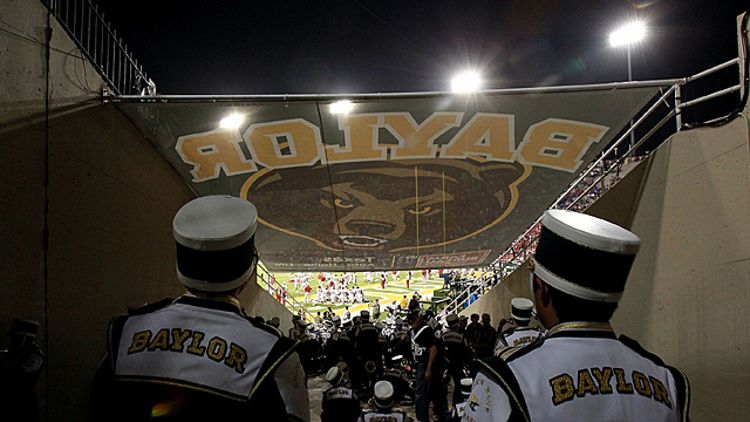 A few years ago Brian Britt realized he had to make a change. College football season was approaching, and he needed a new way to find out who was best equipped to lead his team. The pace of the game was speeding up, and the evidence was right in front of him. When Britt had first come to the University of Oklahoma, Mike Leach, who had helped popularize the fast-moving “Air Raid” attack, was offensive coordinator. Now Leach was winning at conference rival Texas Tech, legions of programs had adopted similarly swift styles, and the pressure was on for Britt to find a way to adjust.

College football fans in the past decade have been witness to an explosion in the number of teams who play fast. Hurry-up, Air Raid, zone read, spread — whatever name an offensive scheme answers to, the end result is the same: a headache for the opposition, who often can’t get off the field quick enough to substitute. But just as the players on the field and coaches on the sideline have been forced to contend with the changing speed of the game, so, too, have the play callers in the stands. Because Britt, you see, isn’t a defensive coordinator: He’s the director of the Pride of Oklahoma, the Sooners’ marching band.

It first occurred to me that Britt’s job may have gotten more difficult over the past 10 years while watching the annual intrastate rivalry game with the Oklahoma State Cowboys that’s lovingly referred to as “Bedlam.” The game was the 107th of its kind. It was also the first to go to overtime. And in the waning moments of regulation, as the Sooners hurried toward a game-tying touchdown, I first noticed something that years of watching college football had trained me to ignore: the band.

The action on the field was incredible. But what was going on in the stands was, somehow, even more amazing. Not only were the 200-some members known collectively as “the Pride” playing during a two-minute drill — a rushed version of an already rushed offense — they were keeping up, too! They only had a few seconds between snaps. Yet within each of those quickly disappearing windows they managed to blast out a combination of notes that were not only instantly recognizable, but cut off at some logical end point. It was as if a talented magician was doing the same act that had made him famous, only now he was wearing a straitjacket.

To figure out how bands like Britt’s have kept up with a changing game, last week I talked to him and the directors of four of college football’s other fastest teams: Dr. Eric Wiltshire at Oregon; Steve Barnett at Marshall; Jim Hudson at Arizona State; and Dr. Isaiah Odajima at Baylor. In the manner of veterans talking about a fellow soldier who’d been honored with a Purple Heart, Wiltshire was the man nearly every other director told me to track down first. The suggestion made sense. As the head of Oregon’s band it’s Wiltshire’s job to keep up with Chip Kelly, the mad scientist whose successful, increasingly frantic offensive schemes have done more to popularize the no-huddle than anyone in America.

He started as director in 2006, a year that he says went by in a blur. His second, and Kelly’s first as offensive coordinator, went by quickly, too, but for different reasons. With Kelly’s hire came a new offensive philosophy: the hurry-up, no-huddle spread. (New, it should be said, only to Oregon. See: Grantland’s Chris Brown on the humble origins of Kelly’s offense). And with that new philosophy came a new challenge for Wiltshire, one that took the form of a question: How do we keep up?

What followed was something like the movie scene where every non-essential part on the plane is removed in order to make it light enough to take off from the short, improvised runway. First to go were any tunes longer than 30 seconds. Then, after the 2009 season in which Kelly became Oregon’s head coach, Wiltshire ditched the flipbook on which the songs were written in favor of hand signals. “By the time I flipped a page,” he says, “it was already too late.” Knowing he had to serve two masters — playing faster while still engaging the audience — Wiltshire hit upon a new idea: theme music. Now whenever one of Oregon’s star players gets a first down, the band plays the first five chords of a recognizable song: the “Hawaii Five-O” theme for quarterback Marcus Mariota (because he’s originally from Hawaii); “Mambo No. 5” for De’Anthony Thomas (because his nickname is “the Black Mamba”); and the “Superman” theme for Kenjon Barner (because he’s really good).

As director, Wiltshire had always spent much of his time facing his band and with his back to the field. But as Kelly’s teams got faster, Wiltshire had less and less time to turn around and see the action. So he began relying more and more on his student drum majors to tell him, for instance, if it was Mariota or Barner who had just picked up the first down. The result was a paradox: Just as Wiltshire’s job demanded that he pay closer attention to the game, the game demanded that he watch less of it.

Steve Barnett doesn’t face that same dilemma. “When we’re on offense I don’t take my eyes off the field,” he says. “Not for one second.” As director of the Marshall University Marching Thunder, Barnett is in many ways Wiltshire’s opposite. Both men preside over bands forced to keep up with some of the nation’s fastest offenses. But whereas Wiltshire was forged by the fire, Barnett only recently stepped into it.

There is no perfect way to measure the speed of an offense. Seconds between plays would come closest, but outside of some halfhearted calculations done by the Wall Street Journal two years ago — Oklahoma was first, Oregon second — no one has bothered to count. What remains are imperfect but telling statistics like plays per game, which Marshall leads the nation in this year. According to TeamRankings.com, Marshall has managed 92.8 plays per game, four more than no. 2 Louisiana Tech. That’s impressive. What’s even more impressive is that last year Marshall ran 25 fewer plays per game and was ranked near the bottom in a category it now leads.

For Marshall fans it’s meant higher scores and more exciting games, if not a better win-loss record. For Barnett it’s meant a change in how he and his band are used. “Our offense has been so good this year, sometimes we march down the field so fast we don’t hardly play,” he says. When Barnett’s band does play, it often plays the fight song. But whereas it used to be able to get through two or three repetitions, now he’s lucky to get through one short five-second burst, and sometimes not even that. “Very frequently we cut off in the middle of things,” he says. “By the end of the game our kids are exhausted.”

Jim Hudson at Arizona State dealt with a similar learning curve. Last year, the Sun Devils lured head coach Todd Graham away from Pittsburgh. In a previous coaching life, Graham’s Tulsa teams had led the nation in total yards. And even during the slowed-down spring game, Hudson could see that he and his band were in for a change. Graham’s spread offense would mean less time between plays. So Hudson did something few other directors have done: When Arizona State is on offense, he rarely calls for anything but drums. Brass and wind require melody, which takes time to develop (even if that time is measured in seconds). Drums only require rhythm, which is instantaneous and offers more frequent and faster exits, just in case the team makes it to the line quicker than expected.

It’s the same kind of streamling that’s been forced upon Dr. Isaiah Odajima at Baylor. As head of the Golden Wave Marching Band, Odajima plays for what some consider to be the fastest offense in the country. Whereas Oregon’s Wiltshire can use hand signals, Odajima has gone to the simplest form of signaling available: He holds up one to six fingers, each one corresponding to a song; pointed up for offense, down for defense. “We’ve gone from making it more organic to more automated,” he says. “Which is not our favorite thing.” But Odajima has been witness to a pleasant byproduct of that automation: more football-savvy band members. Whereas he says there used to be a time when a French horn player could still be successful even if she didn’t know what was meant by a first down, these days the no-huddle offenses require such strict concentration from both directors and members alike that no one can afford pigskin ignorance. “In the past, if a flag was called and I didn’t see it we might start playing,” he says. “Now I have 270 people watching the game who’ll all make the imaginary flag signal if they want me to stop and turn around.”

Which brings us back to Britt and his dilemma. Unlike most of the other directors contacted for this story, he gives his drum majors most of the responsibility come game time. Which means he needs drum majors who can react to a changing game. So when faced with the challenge of finding students who could adjust, Britt adjusted too. In prior years, his audition process had been straightforward: ask the students to conduct a few songs, some of them known ahead of time, some revealed the day of. But on that day a few years ago, Britt decided to add a new wrinkle. He would still ask the students to conduct a song that was new to them. Only this time he would also ask them to stop that song when he tapped on their foot. “You’ve got to shut it down as gracefully as possible, which is a real skill,” he says.

What’s resulted from Britt’s new culling technique are drum majors more comfortable with uncertainty. Which is handy when you operate in a sport that seems to get faster and less certain by the day. There’s a word for that kind of environment, one that promotes uproar and confusion. And it’s a word that college football fans are already familiar with: bedlam.