Souper Bowl I: This Is the Worst 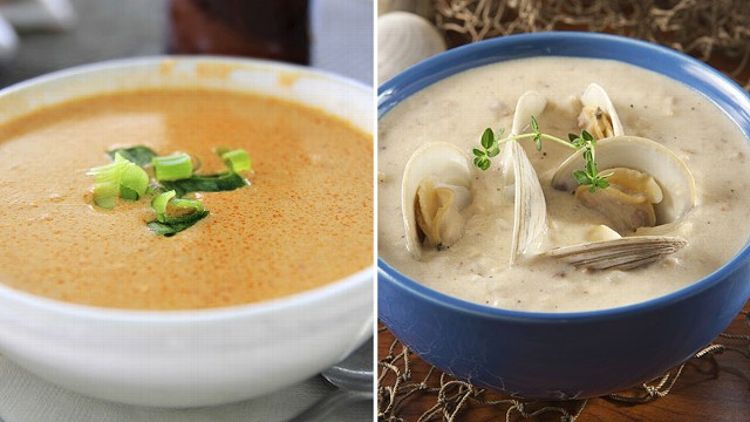 And so we come to this: Two cream-based seafood soups with New England roots battling it out for the Souper Bowl championship.

Please believe that when we began this project, this was our worst-case scenario, a finale that brands us as a group of snooty Boston homers who cast a withering eye to the rest of the world’s soup. When it looked like Ramen might be in trouble against the Ivy Leaguers from Lobster Bisque, a good portion of the staff launched a letter-writing campaign while a certain rogue group of writers went on a quest that should probably qualify as low-grade terrorism. Clawsy, the beloved Lobster Bisque mascot, was found in the center of the quad with his left claw and left legs missing. He can now only walk in circles. Andy Greenwald occupied Lobster Bisque’s student union and threw water balloons filled with drawn butter at school administrators. Some trees were poisoned. But in the end, no amount of public groundswell could stop the rich kids from Lobster Bisque and Clam Chowder from buying their way into the finals. We realized that all of our basketball metaphors were wrong. The Souper Bowl was not a basketball tournament. It was a lacrosse game between New England prep schools, and, predictably, we now find ourselves forced into a choice between Deerfield Academy and Phillips Exeter.

So, readership, this is the world you have created. Proletariat soups like Potato Cheddar, Tomato, and Lentil have been squashed, canned, and stored away in the cupboards of the disenfranchised. International soups like Pho, Ramen, Pozole, Tom Yum, and Tortilla have boarded their flights home and now have to question the point of non-FIBA commissioned competition. The Souper Bowl, which started off with such fanfare, such hope for a happy future, has been defrauded. The 1 percent has won again.

So, yeah. Vote and stuff.

Vote in THE SOUPER BOWL on our Facebook page now!

About Last Weekend: The Land of Giants