Souper Bowl I: Alphabet Falls to Hot and Sour 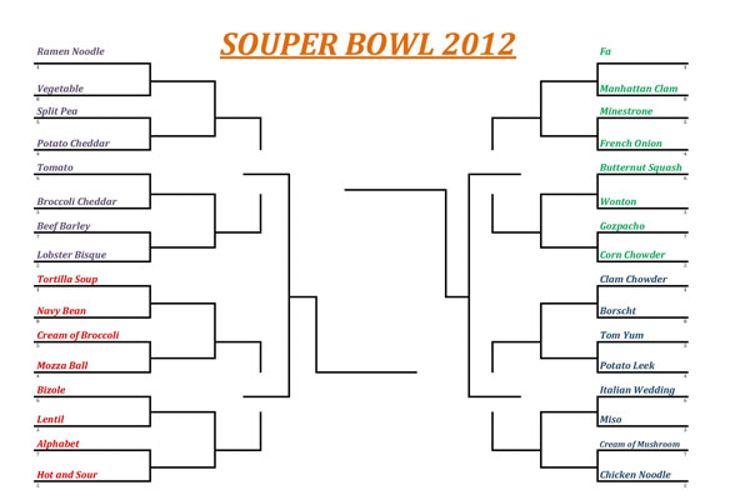 The first day of Souper Bowl I saw only one significant upset, as the old men from Tomato used a combination of ugly post moves, spot-up jumpers, and “blue collar”-ness to take down Broccoli Cheddar. Before action began Monday morning, many tournament pundits were wondering how Broccoli Cheddar received such a high ranking in the first place, as it is more of a tertiary soup. If you replaced the broccoli in Broccoli Cheddar with any other stalky vegetable, would it be diminished in any way? If you ordered it in a restaurant and the waiter brought you Potato Cheddar soup instead, would you really care? Does Broccoli Cheddar really have an identity on its own? Or is it the University of North Carolina at Greensboro of soups?

All these doubts caught up with Broccoli Cheddar, as it fell to a Tomato squad that was playing without its best player, Grilled Cheese Sandwich. In fact, Grilled Cheese’s impact on the success of Tomato is so overwhelming that experts have begun openly wondering if Tomato would even exist without Grilled Cheese. As Yeats might have asked, “O Grilled-Cheese, well-toasted dipper, Are you the leaf, the blossom or the bole? O body swayed to music, O brightening glance, How can we know the dancer from the dance?” Is the Grilled Cheese-Tomato Soup combination about the Grilled Cheese or is it about the Tomato Soup? If you could only choose one, which would it be? According to Synergy Sports Technology, on all of Tomato Soup’s possessions, Grilled Cheese logs in a usage rate of 80.5 when he’s on the floor. The team’s overall +/- goes up 30 points.

In the day’s other hotly contested matchup, the twee idiots from Alphabet came out firing against Hot and Sour. Alphabet was the Florida State of the Souper Bowl — the last team in and the source of much controversy. The argument for Alphabet’s inclusion over Mulligatawny went like this: “It’s cute and people like cute things! Awww, let’s all fawn over the corporate icons of our childhood and wear fucking ThunderCats T-shirts even though we’re 32 and have two kids! Let’s all pretend like the responsible, dynamic world that we now inhabit, where a phone can tell you how to avoid traffic on the 101, no longer exists! Let’s all sit around in a nice circle, play kickball, gush about A Wrinkle in Time and vote for Alphabet!”

The fact that such sentiments could gain such a huge following over the venerable Hot and Sour bodes very poorly for the future of this country that I love. So to all of you who voted for Alphabet, why don’t you go tesseract yourselves to hell.

Vote in SOUPER BOWL DAY 2 on our Facebook page now!