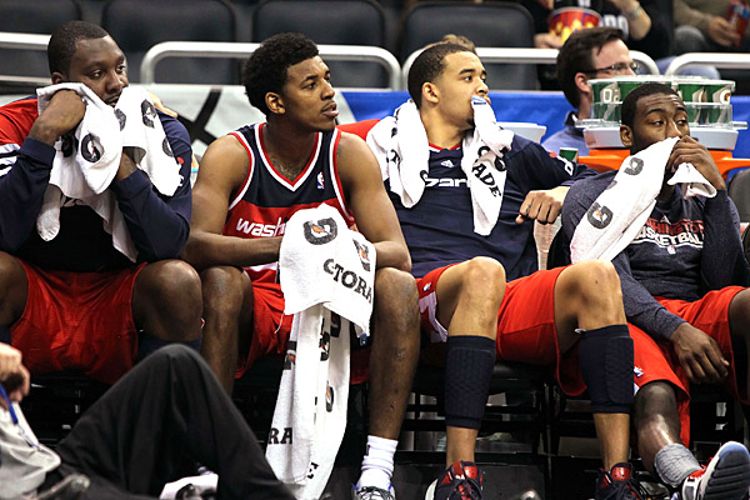 January is winding down, which means it’s time for one of The Triangle’s favorite features — Quotes of the Month. As you might recall, the boss requested we revive this one, which we were happy to do, because this month Flip Saunders said: “Booing is not going to help somebody play better,” so it’s great to have an opportunity to point that out.

Yes, OK, perhaps we’re a little heavy on Wizards quotes this month. In our defense, they were terrible.

Thanks to our Grantland interns who put this post (and the last one!) together. We’ll remind you about this next month, so Friends of Grantland can submit their own entries … and make our lives easier.

“Three tickets, center court upper level (section 400), 4th row. Face value is $30 each. Will sell for $5 each, however if you were to forget to send payment via PayPal, I would not be heartbroken. I will email the tickets once I hear there is someone willing to attend the game. This is a once in a lifetime opportunity to watch Javale goaltend, Dray shoot 18 footers and The Nick Young baseline ballet, all against a team from Canada. Folks, it doesn’t get much better than this.”
— Washington D.C. Craigslist ad for Wizards tickets

“Don’t do it, Flip!”
— Wizards fans, upon seeing Andray Blatche enter a game

“They have no weaknesses. They’re just like their mother. They’re stealth.”
— Jack Harbaugh, on sons John and Jim

“Wait, are you serious?”
— Patriots tight end Rob Gronkowski, when asked what sort of injury would keep him sidelined

“I don’t like them. Plain and simple, I do not like them. They used to whip us pretty good and used to let us know about it, and I. Will. Not. Forget. That.”
&#8212′ Kobe Bryant on the Phoenix Suns

“I know you are all wicked happy to be here.”
— President Obama to the Boston Bruins during the team’s White House visit

“Money.”
— Suns guard Steve Nash on what motivates him to keep to keep going as he’s about to turn 38

“It’s been awesome for me. How many free meals have I gotten? Dunkin’ Donuts donuts and coffee and all that for free? Are you kidding me?”
— Celtics guard Keyon Dooling on playing in Boston

“Usually, I sleep.”
— Nuggets center Timofey Mozgov on what he did with his free time as a New York Knick

“That was Ron Artest out there tonight. That wasn’t no World Peace.”
— Lakers forward Devin Ebanks on Metta World Peace’s game against the Clippers earlier this month

“I talked to him after the game, and I told him, ‘That’s what we need. That’s who you are. When you get between those lines, you’ve got to be the person you were in Indiana.’”
— Lakers guard Kobe Bryant on Metta World Peace

“I have my own little career too.”
— Sasha Vujacic on being overwhelmed by fiancée Maria Sharapova’s success

“Our record doesn’t show that, so it’s hard to kind of say I’m not full of shit. I’m not sure if I can say that on the radio or not. But I really feel like we’re a good team.”
— Redskins quarterback Rex Grossman on his team’s struggles this season

“My family has [had seats] since 1994. There have been a lot of bad Wizards teams since 1994. This one is so fundamentally awful, I can’t give the tickets away. I couldn’t give my tickets away for [Monday]’s game. That’s the first time that’s ever happened to me as a Washington Wizards fan.”
— NBC’s Luke Russert

“I never thought ‘Sodapop Curtis’ would announce my retirement.”
— Peyton Manning on Rob Lowe’s tweets about Manning’s future in the league

“Is it just California that everybody just wants to know how you feel? Care about what you thought, what you did, how you felt, how your pinky feels. Is that just a California thing? Back where I come from, nobody really cares. In my opinion, it is a California thing.”
— San Francisco 49ers coach Jim Harbaugh on what he did after NFC Championship game

“He is not a knucklehead.”
— JaVale McGee’s mom

Filed Under: Quotes of the Month, Say What, Washington Wizards

More Quotes of the Month

See all Quotes of the Month

Things Blake Griffin Killed When He Dunked on Kendrick Perkins

Souper Bowl I: Alphabet Falls to Hot and Sour