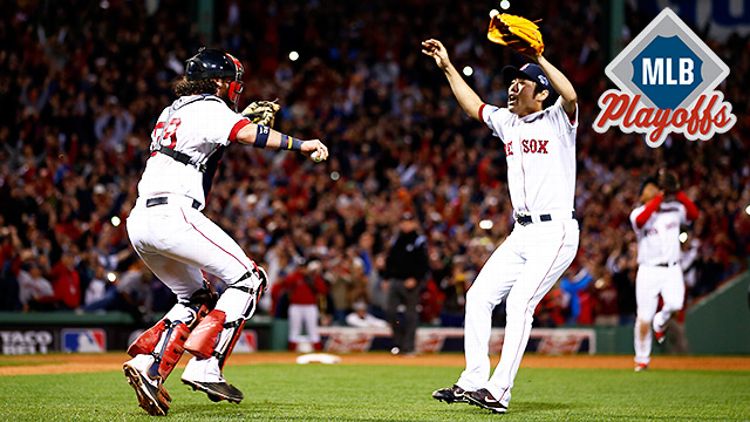 This is not a great World Series pairing for neutral fans. Scrappy underdogs Pittsburgh, Tampa, Cleveland, and Oakland are out. Cincinnati lasted one game, despite fielding one of baseball’s best offenses. The ebullient Dodgers are gone, and with them the postseason’s best pitcher (Clayton Kershaw) and most intriguing player (Yasiel Puig). No more lightning-rod Braves, no more outstanding and well-rounded Tigers.

We’re left with two very good but very vanilla teams. And the matchup is as bland as the clubs: We’ve seen this show not only in 1946 and 1967, but as recently as 2004. In the past 10 years, the Red Sox and Cardinals have combined for 11 LCS appearances, five pennants, and four World Series. This isn’t just a remake; it’s Starship Troopers 3: Marauder, and that makes it hard for baseball fans who aren’t from New England or greater St. Louis to pick a team to support.

Luckily, there is something impartial observers can love about each of these teams.

Three Reasons to Root for the St. Louis Cardinals

1. St. Louis’s Success Rewards Good Process. Anything can happen in a short series. Just ask the 2007 New England Patriots, who went undefeated in the regular season, then failed to win the Super Bowl. We know this implicitly, otherwise the greatest speech in sports-movie history wouldn’t have been built on the premise that an inferior team sometimes wins. And the smaller the sample, the greater the chance of recording a result that goes against expectations. So if you’ve ever assaulted a stranger at a bar because he conflates the best team with the league champion, you want the Cardinals to win.

The Cardinals are the best-run organization in baseball, and perhaps in all of North American sports. They scout well, and they develop the players they scout better than any other team. They hardly ever make a mistake in free agency, bringing in Carlos Beltran for a song and locking up Adam Wainwright and Yadier Molina while letting Albert Pujols walk at precisely the right moment. Less advanced civilizations would either burn St. Louis GM John Mozeliak as a witch or worship him as a deity. This kind of sustained excellence doesn’t happen in sports very often, but if you want the best-constructed team to win, you’ll root for the Cardinals.

2. This Is Carlos Beltran’s Shot. Last week, Keith Law wrote about how certain players (including Beltran) who are widely considered “clutch” are simply good in all situations, high-pressure or not. It seems like Beltran, whose playoff résumé has only become more astoundingly good this year, is finally being noticed as the slam-dunk Hall of Fame candidate that he is.

As amazing as his playoff performances have been, Beltran is no Gil McDougald: He has never played in a World Series, and at 36 years old, he won’t get too many chances after this.

3. The Red Sox Have Stupid Beards. Listen, beards are great. I’ve had a beard since the moment I could grow one, and I haven’t even owned a razor since college. To paraphrase Edmond Rostand, know that I glory in this beard of mine, for a great beard indicates a great man: genial, courteous, intellectual, virile, courageous — as I am — and such as you, poor wretch, will never dare to be even in imagination.

But come on, guys. A few years ago, Jayson Werth decided to go fully biblical, and then Brian Wilson decided to go one step further, elevating the Karl Marx beard into an obnoxious artifact of cultural tone deafness that makes the idea of Justin Bieber playing an organ grinder in a Youppi costume while riding a unicycle seem like the model of dignified restraint.

The Red Sox apparently had some bad clubhouse juju last year, and if they all need to have some unifying thing to bring them together, more power to them. But real men don’t look like savages. Seriously, when Dustin Pedroia’s eye black gets runny, he starts to look like Robinson Crusoe. It’s not charming or colorful. It’s infantile. Don’t encourage it.

Three Reasons to Root for the Boston Red Sox

1. These Are No Longer Those Annoying Red Sox. Before 2004, I was totally onboard with the Red Sox. I wasn’t primarily a Boston fan, but the Sox were the foil to the Yankees, and it was hard not to feel for a franchise that had suffered so much heartbreak. Then came 2004, and a billion articles and the pink hats and Fever Pitch, and … actually, let’s talk about Fever Pitch for a second.

Fever Pitch is based on a charming 1996 romantic comedy starring Colin Firth and Mark Strong, which is in turn based on Nick Hornby’s book of the same name, which details the High Fidelity author’s lifelong love of Arsenal FC and is the best sports memoir ever written. The Jimmy Fallon/Drew Barrymore vehicle that came out of the 2004 Red Sox is arguably the worst sports movie ever made, and perhaps the worst movie ever made on any subject.

So when I say that it’s time to forgive the Red Sox for the mid-2000s, know that I don’t take that declaration lightly. The Great Collapse of 2011 and the Beer and Chicken Affair that followed the team into 2012 caused Boston to dismiss most of its more objectionable players, leaving only five members who factored into the 2007 World Series on the team at all, and only one who was around in 2004. You might not notice this at first, because we’ve become used to seeing Shane Victorino, Koji Uehara, Mike Napoli, and John Lackey play in October for other teams, but this is almost a completely new squad, featuring several players who are easier to like than the last group of Red Sox. Including …

2. Koji Uehara. When I said earlier that John Mozeliak was either a witch or a demigod, I didn’t mean to imply that he was capable of the kind of magic that has become the calling card of Boston’s closer. Uehara, then 34, came over to the United States in 2009 and put in a pedestrian season as a starter for Baltimore, then gradually turned into the best reliever in baseball over the past four years. This season, in addition to throwing a hidden perfect game over four weeks in August and September in which he didn’t allow a baserunner, Uehara struck out more than 11 batters for every one he walked, which is actually down, if you can believe it, from the 14-1 strikeout-to-walk ratio he posted last year.

Nobody in this series is better at his job than Uehara is, and because he’s the closer, he pitches most when the Red Sox are winning. That seems like a good reason to want the Red Sox to win.

3. Reject the Narrative. I don’t know if you watched the NLCS, but there was a lot of talk about the Cardinal Way and Playing the Game the Right Way, as the Cardinals struck a blow for team respect against the more exuberant Dodgers.

Now, if you actually take a second to look at how the Cardinals play, you’ll find that they’re not the stultified anhedonic creeps they’re made out to be. But if St. Louis wins, you’re going to read enough column inches about the triumph of the scrappy middle infielder to reach from here to the moon and back, and Shane Robinson will show up at Thanksgiving dinner. Nobody wants that. Go Sox.