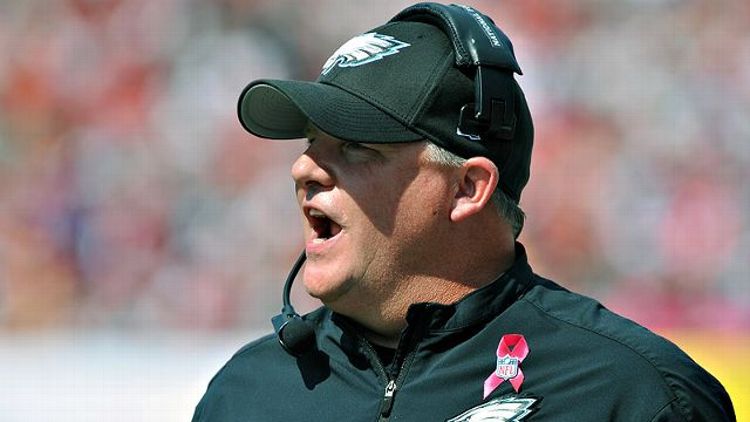 Every now and then, we will attempt to write the worst sports column on earth. Today: Let’s talk about Chip Kelly and the oldest story in the world.

PHILADELPHIA — Just once, wouldn’t it be nice to get an apology from one of these college coaches?

I just want one of these know-it-alls to admit that in the end, the NFL knew better.

You know the story before I’ve even written a word. The hotshot college coach who thought he could outsmart pro football. Teach the experts a thing or two. Save his quarterback’s career. Spread out his receivers and conquer the big leagues. Press conferences full of hype all summer, then fall arrives, and … crickets. The coach came, he saw, he got conquered. He promised to reinvent the wheel, he left with the engine on fire.

You could throw 15 names into that story over the last 25 years, but this week it’s the Eagles mastermind we’re talking about. I’ve started calling him Chump Kelly.

You won’t find many silver linings in this playbook.

Did you see the game Sunday? The one when the Eagles got embarrassed at home against the hated Dallas Cowboys? That was a genius on the Philadelphia sideline. A celebrity. A rock star. The guy who promised us 10 touchdowns before you could blink.

But there he was Sunday, staring into the distance while his high-powered offense scored three points in 60 minutes. Chip?

It’s a tale as old as time. Before anyone ever played a down of football, there was once a hotshot named Icarus who thought the rules didn’t apply to him. His father made him wings of feathers and wax so he could fly away to a better life. There was only one warning that came along with the wings: “Don’t fly too close to the sun, son, because the wax wings might melt.”

But Icarus thought he was bigger than the laws of the universe. He went right for the sun.

Spoiler alert: His wings melted and he came crashing back to earth.

You don’t have to be Zeus to see the parallels to this year’s Eagles. They started out hot, but it turns out players aren’t built to run 100 plays an hour. Eagles are getting injured left and right, the fast-paced offense has slowed to a crawl, and everyone’s wings are melting.

It turns out the laws of the NFL universe apply to everyone.

All this brings me back to a year ago, when Nick Saban — a patron saint for hard-nosed football — saw the explosion of spread offenses and no-huddle gimmicks. He spoke for football fans everywhere when he asked, “Is this what we want football to be?”

It doesn’t matter what we want football to be. The game decides. All these innovators can do their best Icarus impression, but the most remarkable aspect of America’s game is the way it never fails to expose these hippie-dippie gimmicks on the field. The gridiron is the ultimate arbiter of justice.

This is a results-oriented business, and if your brilliant scheme doesn’t work?

You’re out of work.

That’s what we’re seeing with the Eagles this year. This Chip’s crumbling, and it’s only a matter of time before someone in Philly decides to grab the vacuum.

Michael Vick hasn’t looked good since the first half of the first game. LeSean McCoy has only cracked 100 rushing yards three times in two months. The passing game is a disaster, the defense is in shambles. These are the facts.

We’re all just waiting for the housecleaning.

A few more months, or a few more years. Isn’t that the biggest question left with the Chip Kelly era? The spread offense is a dead offense. The fireworks have come and gone, and all we have left is a guy who’s afraid to take responsibility.

Right, of course. It’s not just one guy.

It’s definitely not just one guy who came into the NFL talking the talk and then got walked all over. Anyone who sees that must be watching a different game.

The Chump has spoken.

Most of all, he could admit he was wrong and apologize to the National Football League for underestimating everyone. Admit that after all that hype and all that money, he thought the laws of the NFL universe didn’t apply to him.

But hey, it’s everybody’s fault. Remember? No apology necessary. It’s never the driver’s fault when the engine catches fire. It just sort of happens. A lot of things go wrong.

Maybe I’m being unfair, maybe this is all premature, and maybe Chip doesn’t have to admit defeat. Maybe you think Chip just needs more time and better players. Maybe, sure. But I’ve been in this business a long time. I know how this story ends. Maybe you’re not ready to call him Chump Kelly just yet.