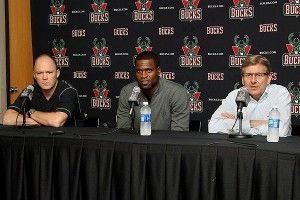 Hey everyone, I am retiring from writing about sports and Justified to become a couples counselor for Scott Skiles and Stephen Jackson. I seriously cannot imagine a more entertaining job.

Jackson got a DNP — Coach’s Decision on Monday night when the Bucks beat the Pistons. It might as well have been a DNP-GTFO seeing as how things are going between the veteran swingman and his coach.

There have been plenty of rumors that Jackson could possibly be traded soon, but not a lot of straight talk. Jackson was due to make his return from suspension Monday, but was apparently not in his coach’s plans for the night. When asked about the decision to bench Jackson, Skiles said, “We’re playing pretty well right now, so I’m going to make the best decisions I can to stick with what’s working.” Very candid.

Jackson, for his part, was a little more forthcoming and transparent: “They know my situation; they know how I feel, so it’s not disappointing. We won the game. I supported the guys. And you know what, for the most part, Scott is right. We are playing well without me in the lineup.”

See, Scott? He’s meeting you halfway. I think some real growth and trust could happen here. This is about active listening! All you dudes need to do is really chop it up with each other. Will this happen, S-Jax? Will Skiles break bread with you? “You know what, I’m pretty sure he won’t.”