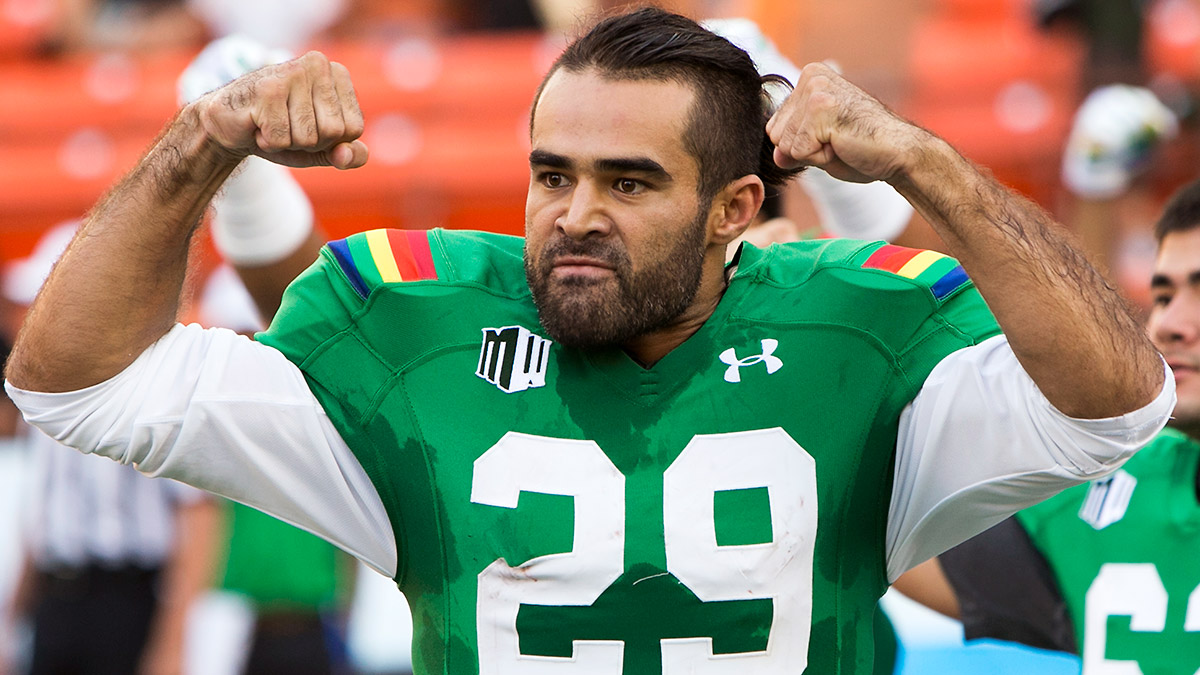 The most fascinating laboratory experiment in college football this season has unfolded almost entirely out of view. Unless you are a hardcore gambler or a raging insomniac, you probably don’t catch many Hawaii games on your viewing interface of choice: The Warriors’ road contests are often marooned on a sports-tier channel you may not have even known you get; the home dates generally start at a surreal hour on the East Coast and are peopled by broadcast teams doled up in Tommy Bahama shirts and conversing in the sort of surfer-brah accents that seem genetically engineered to lull you into a REM cycle.

There is also the unavoidable issue of Hawaii not being very good at the moment. The Warriors are 3-8 this season under Norm Chow, who may be approaching the twilight of an otherwise distinguished coaching career at the very moment the school is seriously considering its commitment to fielding a football team in the first place, given that it is situated roughly 2,400 miles from its nearest Mountain West Conference opponent. Chow’s three seasons in Honolulu have been replete with injuries and suspensions and personal anguish and very little winning, but there is one remarkable footnote to this era of Warriors football, and his name is Scott Harding.

Harding is 28 years old, and he is Hawaii’s punter, but he is also one of the most intriguing hybrid/throwbacks in recent memory. In 2012, when the Warriors’ previous punter, Alex Dunnachie, was suspended for a DUI arrest, Hawaii special teams coordinator Chris Demarest noticed Harding screwing around during practice by slapping footballs downfield with his left foot, and then with his right foot. Demarest asked, “Can you do that all the time?” Harding nodded in the affirmative, and Demarest said, “You’re going to be my punter,” and then he nearly ran back to his office and started diagramming an entire scheme around Harding’s unique abilities.

There is a reason Harding is adept with both feet, and it goes back to his advanced age. He was born in Australia, and he played Australian rules football for six years, five of them with his hometown Brisbane Lions. He grew up with the National Football League on his television set, a faraway curiosity that many Australians adore but most only partially comprehend. Watching the NFL and recognizing its broad outlines, Harding thought to himself, I have that kind of skill set.

And so when he was cut by an AFL team in Port Adelaide, he began training with Australia’s Prokick Academy; on the basis of a YouTube video, Hawaii’s previous coach, Greg McMackin, offered Harding a scholarship. It was not unusual for Hawaii to mine Australia for kicking talent — that’s where Dunnachie was from, and Hawaii turned NFL punter Mat McBriar before him — but here’s where it gets a little strange: Harding was not recruited as a punter; he was recruited as an athlete.

At first, when he began training to play American football, Harding didn’t fully understand each position, let alone know what position he could play. But he always had sure hands, and so he worked out at wide receiver. He picked up the rules and nuances of the game on the fly (running routes, deciphering blocking schemes, putting on shoulder pads), and he’s still learning as he goes; just a few weeks ago, he figured out that the quarterback could throw a pass to a receiver behind the line of scrimmage. In 2011 and ’12, Harding was a punt returner and a slot receiver, and then Demarest saw Harding kick with both feet and concocted his mad-scientist blueprint, a bundle of formations and options that have made the Warriors the most versatile punt team in America.

There have been multiple Australians who have succeeded as kick specialists on the college level (there are at least four in the Big Ten alone this season); there has been one (former Alabama defensive lineman Jesse Williams, now on injured reserve with the Seahawks) who succeeded as a position player.1 But as far as both Harding and Demarest can tell, no one has ever done both at the same time. In 2013, Harding was the team’s second-leading receiver, its primary punt returner, and its primary punter.

Harding is a natural righty, but says he’s equally comfortable kicking with either foot, in part because the Australian game requires that sort of ambidexterity. Depending on the side of the field and the hashmark Hawaii finds itself on during a fourth down, Harding can either roll to his left and boot it left-footed, or move to his right and kick it right-footed. There is also the constant threat of a fake, because, in addition to executing pre-planned fakes off certain sets, Harding is adept enough as a runner that Demarest gives him a constant green light to take off. Because Harding is not averse to contact — the hits he takes almost feel muted, he says, after all of those years playing Australian football without pads — he winds up holding the ball until the last possible second so the kick coverage team can get downfield. He’s yet to have a punt blocked. His gross average is 41.8 yards and his net average is 41.1; opponents have managed a total of 30 punt return yards against him the entire season, a measly .41 yards per punt.

“I’ve been doing this for 27 years,” Demarest says, “and I’ve always believed that fourth down should be an extension of your offense. We have multiple formations and sets, and that causes a lot of stress on opposing teams to be able to defend it.”

Occasionally Harding winds up taking a harrowing shot as he’s delivering a punt, but it’s worth it, because his rugby-style kicks spin backward, making them almost impossible to handle and allowing the Hawaii coverage team to get downfield as the ball is careening ahead, pinning the opposing team deep in its own territory. Against Colorado State on November 8, Harding twice pinned the Rams inside their own 5-yard-line in the first quarter; one of those punts led directly to a safety. The second led to a CSU punt, which Harding — still the Warriors primary returner, and perhaps the only major-college player in recent memory to routinely work both ends of a punt — took back to the Colorado State 30-yard line. “It’s like a personal battle for me,” Harding says. “I love putting pressure on their punter.”

But his role doesn’t end there. Later in that same game, Harding also caught a touchdown pass as a slot receiver.

He has 34 receptions for 457 yards and three touchdowns this season. Against the Rams, he also returned another punt, and he forced a fumble when CSU punt returner Dee Hart, feeling bold, attempted to scoop one of Harding’s punts into his hands mid-bounce.

Those sorts of turnovers have become a regular occurrence this season, and it’s another reason why Harding might be the most versatile and valuable football player on any team in the 50 states: Opposing coaches are forced to burn precious practice time on punt-return strategy, and they wind up trying almost everything to avoid mistakes.

Harding has seen teams send three returners back to receive his kicks; he’s also seen two, and one, and zero. Nearly every coach the Warriors have played this season has complimented Demarest on his scheme and marveled at Harding’s peculiar and unprecedented skill set.2 At this point, Demarest says, Chow also thinks Harding is the Warriors’ best wide receiver.

The conventional wisdom is that Harding won’t be able to succeed as a punter in the pros, because NFL rules only permit the outside receivers to release on the snap of a punt (in college, the entire team can streak downfield on the snap), which would nullify the ability of Harding’s rugby kicks to spot his coverage team an advantage. So he’ll try, instead, to make it as a slot receiver.

But the beauty of his abilities is that they’ve already inspired at least one coach to think entirely outside the box. Who’s to say there isn’t a coordinator in the NFL who might view Harding as a muse? Imagine Harding catching a slant in the final seconds of the half, and streaking toward the middle of the field, and lining up to drop-kick a left-footed field goal. It may seem far-fetched, and perhaps it is, but this is what watching Hawaii football at two in the morning can do to your brain. Sometimes, the most creative ideas emerge in the weirdest of circumstances.