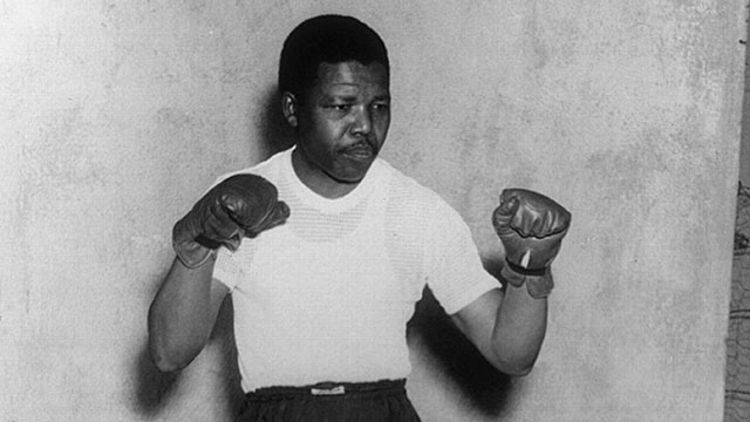 With Nelson Mandela’s death yesterday at age 95, the world lost not only a champion of equality, freedom, and democracy, but also an all-time great boxing philosopher and aficionado. Beyond his political career and achievements in human rights, Mandela was a lifelong student of the sweet science and friend of several heavyweight champions, including Muhammad Ali.

Mandela’s pugilistic proclivities have been thoroughly documented over the years, including in his 1994 autobiography Long Walk to Freedom. Raised in the era of Joe Louis, when boxing was still far and away the world’s most popular sport, Mandela first stepped into the ring as a college student in the late 1930s. Later, while running South Africa’s first black-owned law firm with fellow anti-apartheid leader Oliver Tambo, he could often be found after work training at the Donaldson Orlando Community Centre (DOCC) gym in Johannesburg with his 10-year-old son Thembekile in tow.

“Like most African gyms ours was poorly equipped,” Mandela wrote. “It had a cement floor which was quite dangerous when a boxer was knocked down in sparring. We could not afford a ring, nor more than one punching bag and a handful of pairs of gloves … We had no medicine or speed balls at all, no qualified masseurs, proper boxing trunks and shoes, skipping ropes and even mouth pieces.”

(For a lengthy first-person account of Mandela’s boxing background and training, check out this document (PDF) hosted by NelsonMandela.org, starting on page 241.)

A young and extremely badass-looking Mandela was famously photographed in 1953 sparring with the star of his gym, future lightweight champ Jerry Moloi. (The image later inspired Shadow Boxing, a 16-foot steel sculpture unveiled last year in Johannesburg.) Mandela described with typical poignancy the barriers Moloi and others faced as fighters in colonial South Africa, where they were barred from joining white gyms with vastly superior facilities.

“Almost all African professional boxers have full time employment and only start their daily training program after working hours, exhausted and not in a condition to get maximum benefit from training,” Mandela wrote. “Sparring partners are few, either not paid at all or poorly paid and frequently not up to the grade. A sparring partner should offer real opposition to a boxer preparing for a fight and not be a mere punching bag. Sparring sessions are like a rehearsal of a play before the actual performance and each boxer should play his part conscientiously.”

A natural heavyweight, Mandela never fought professionally, but he described how his amateur training regimen helped him handle the stress that accumulated as a revolutionary leader battling a repressive regime. When Floyd Patterson became the youngest undisputed heavyweight champion in history in 1956, Mandela and 155 of his comrades were on trial for treason, charges for which they were ultimately acquitted.

“I never did any real fighting after I entered politics,” Mandela recalled. “My main interest was in training; I found the rigorous exercise to be an excellent outlet for tension and stress. After a strenuous workout, I felt both mentally and physically lighter. It was a way of losing myself in something that was not the struggle. After an evening’s workout I would wake up the next morning feeling strong and refreshed, ready to take up the fight again.”

When he was arrested again and imprisoned in 1962, boxing was one of the many things he lost. He was incarcerated for the next 28 years, and later used boxing imagery to depict his daily routine as a grueling fight for survival: “The first bell rings at 6 a.m. [and] means it is time to get up, make my ‘bed’ and clean my cell … it takes about five minutes for I have just two sisal mats, four blankets, [and] the bitterly cold cement floor as my bed.”

In his autobiography, Mandela ruminated on the life lessons he learned from the sport, writing “boxing is egalitarian. In the ring, rank, age, color, and wealth are irrelevant.”

“I did not enjoy the violence of boxing so much as the science of it,” Mandela said. “I was intrigued by how one moved one’s body to protect oneself, how one used a strategy both to attack and retreat, how one paced oneself over a match.”

Following his release from prison in 1990 at age 71, it was clear Mandela still had a soft spot in his heart for fighters. When he was awarded the Congressional Gold Medal by Congress in 1998, he gave a shout-out to Evander Holyfield and remarked, “Today I feel like the heavyweight boxing champion of the world.”

Mandela was present for Hasim Rahman’s shocking knockout of Lennox Lewis in Johannesburg in 2001, and later predicted (accurately) that “if Lennox trains properly for the rematch he will have a good chance of regaining his titles.” In a post yesterday on his website, Lewis said Mandela was one of his “lifelong heroes,” and called him “the blueprint of strength, grace and dignity in both the face of oppression and the privilege of power.”

Mandela was behind bars for all but the early years of Muhammad Ali’s career, but the two struck up a close friendship later in life. During a television interview in 2000, Mandela said Ali was “one of my heroes,” and Ali issued a statement yesterday following the news of Mandela’s passing that powerfully sums up the South African’s tremendous influence and lasting legacy:

“He made us realize, we are our brothers’ keeper and that our brothers come in all colors,” Ali said. “What I will remember most about Mr. Mandela is that he was a man whose heart, soul and spirit could not be contained or restrained by racial and economic injustices, metal bars or the burden of hate and revenge. He taught us forgiveness on a grand scale. His was a spirit born free, destined to soar above the rainbows. Today his spirit is soaring through the heavens. He is now forever free.”

Keegan Hamilton (@keegan_hamilton) is a freelance journalist in New York.

Filed Under: In Memoriam, Boxing, Obituary