Real Madrid and Manchester City’s Second Half to Remember 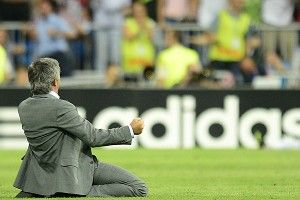 The first half of Real Madrid and Manchester City’s Group D (is for “death”) was not something you would tell your kids about. The second half? That was a reason to have kids, just to tell them about it, especially the last 10 minutes. If this is what bloated contracts, absurd transfer fees, and the tractor beaming of talent looks like, then I, for one, welcome our not-so-new, well-moneyed European football overlords.

Both City and Real have had iffy starts to their domestic league seasons. City because they failed to buy … I don’t know … the Engineer from Prometheus during the transfer window and have not looked like Premier League champs in their close victory over Southampton and draws with Liverpool and Stoke. Real Madrid because they seem to be suffering through some kind of malaise more befitting a character in Ghost World than defending La Liga winners (by which I mean they are in 12th place, winning one, drawing one, and, absurdly, losing two).

You would never have guessed any of that based on the second half of Tuesday’s match. No, you would have pegged these two clubs for what they are: two of the richest sports franchises on the planet, sporting two of the most talent-laden rosters in the history of world football.

Goals change games. But when they get scored so frequently, in such a compressed period of time as they did on Tuesday (five in 22 minutes), they just blow everything up. City manager Roberto Mancini is a staunch disciplinarian and Real boss Jose Mourinho may be the greatest tactician of his generation, but by the end they were just innocent bystanders, watching the debris fall where it may. Look at Mourinho in the GIF above. At that point, he’s a fan.

Well, there might be something deeper there. Whereas City’s early season can be chalked up to working out some kinks in the no doubt top-of-the-line armor, something deeper and more complicated is happening in the Spanish capital. The problems at Real Madrid — the rumors of dressing room factions and dissension, Ronaldo’s “I am sad” statement, Mourinho claiming he has no team after Real’s loss to Sevilla — it all seems a little, on the surface, like Chelsea right before Rosenborg, in 2007.

Yesterday’s victory might right the ship. “The DNA of my team is back,” Mourinho said after the match. “They proved to me that if they want to be top professionals and respect Real Madrid’s history they can do it.”

“It” is Real’s highly coveted 10th European Cup/Champions League. It’s the reason Mourinho came to Real; his stated goal was to win the trophy with what would be a record third team (he has previously hoisted the cup with Porto and Inter Milan).

Real took the first baby step toward their 10th cup by surviving a harrowing second half against City, giving a performance almost antithetical to what we talk about when we talk about a Mourinho team. Mourinho-managed sides are all about control. Think of his Chelsea team and the image of them choking the life out of matches after going up a goal or two comes to mind. Think of his Inter Milan team that won the Champions League and you think of the performance in the second leg of the 2009-10 tournament, when they held on against Barcelona, in Spain, down a man, to advance to the final. It’s not so much overly defensive football as it is precisely controlled, incredibly physical football.

Control, man. Control was practically spilling out of Santiago Bernabeu for the first hour and change of the match. Of the six starting central midfielders — Touré, Barry, Garcia, Essien, Alonso, and Khederia — there wasn’t a pure playmaker in the bunch. This wound up nullifying, well, everything. Even commentator Martin Tyler muttered something about the first goal being a “golden goal” given the way the two teams were defending.

As the managers began sending on their subs, exerting their control, the match became more and more chaotic. Edin Dzeko and Aleksandar Kolarov scored City’s two goals (though it should be noted that the former was the product of a classic, rampaging Touré run …

… and Kolarov’s had as much to do with Xabi Alonso’s stray leg than the absurd amount of English the Serbian put on his free kick.)

After the second City goal, the match became less like a clash between soccer behemoths and more like an And1 basketball game. The Guardian‘s wonderful tactics writer, Michael Cox, simply threw up his hands at the action toward the end of the game, writing, “The frantic final 10 minutes were beyond any rational explanation.” But you don’t need an explanation when something this wonderful is happening.

City were doing a credible, if seemingly spent, version of parking the bus, ceding possession to Madrid (according to ESPN Stats & Info, Real made 221 passes in the final third of the field compared to City’s 68), if perhaps taking that Mourinho-coined phrase a little too literally. They looked like they were all sitting on a parked bus rather than closing down with any zeal. Real pinged the ball around Joe Hart’s goal, with subbed-on playmakers like Luka Modric and Mesut Ozil quickening the pace and raising the threat level of the Spanish team’s passing game.

Benzema’s goal — and this has been said a hundred times — was the Platonic ideal of a striker’s goal: one-touch, turn, and bang. But if the Frenchman’s goal was a classic no. 9 hit, Ronaldo’s goal was all Ronaldo.

Ronaldo had looked dangerous for the previous 10 or so minutes, stinging Hart’s hands with a shot at one point. Which makes us wonder why Zabaleta thought he’d take the long view of the Portuguese winger when he received the ball from Marcello on the left flank. This is almost like some kind of clear-the-room police exercise. If Mancini really felt the need, he could freeze the above video at the five-second mark, direct his pointer at Zabaleta, and say, “That’s when you died.” Mancini being Mancini, he would probably just stare and look great in a scarf.

There are certain things in sports that you simply can’t manage or game-plan or defend. Ronaldo coming in off the left and setting up a shot on his right foot is one of them. A few things about his game-winner worth noting: the slow-motion with which he loses Zabaleta with one, smooth move, rather than his usual array of step-overs; Vincent Kompany ducking the shot; the shot ducking Joe Hart’s hands; Joe Hart’s disbelief and rage matched by Javi Garcia’s disbelief and rage (that’s him falling to the ground and beating the Bernabeu turf); Martin Tyler shouting, “Well, he’s celebrating this one!”; that jet engine sound that only about 100,000 people can make when a goal goes in.

And then you look at Mourinho. You look at him lose control (albeit in the coolest, most calculating, suit-trashing way). Perhaps there was as much release for him as there was for the home crowd. Something lifted (besides his assistant, whom he cut in line to celebrate on the field). I love a good Mourinho celebration, and this one is up there with my favorite from his Chelsea days when he went bananas after William Gallas’s strike against Tottenham:

When he celebrates like that, it’s almost because something has happened despite his meticulous planning, like the true joy of the game has flooded back into him. I get that. I felt it too.