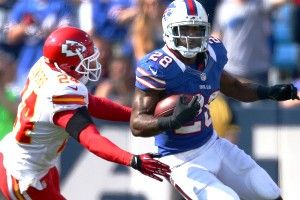 The home team’s offensive possessions in Sunday’s Bills-Chiefs game saw two units traveling in opposite directions. On one side was Bills running back C.J. Spiller, the speed demon from Clemson who has emerged as a surprise superstar during the first two weeks of this young NFL season. Opposite him was a Chiefs defense that had just allowed 40 points to the Falcons and was about to get 35 more put on them by Spiller and his teammates. Spiller produced his second monstrous performance in as many weeks, running for 123 yards and two touchdowns on just 15 carries while adding in 47 more yards on three receptions.

Whenever a big game like this happens for a back, it’s always a combination of effective offense and ineffective defense, but the important thing is figuring out which side contributed more to the effort and why. In this case, we want to figure out how the Bills are using Spiller, what they did to prevent the Chiefs from getting near him, and whether the Chiefs can do anything about it in future weeks. Let’s try to figure out if C.J. Spiller and the Chiefs’ porous defense are each for real.

Of course, it’s nothing new for the Chiefs to start the season off slowly on defense. Last year, they allowed 89 points during their first two games of the season, which included a 41-7 waxing by these very Bills. When a team loses a home-and-home series over two seasons by a combined 63 points, Charlie Weis and underclassmen are usually involved. The Chiefs had an excuse for those two performances last year and a similar one for the opening game versus the Falcons: Injury. They didn’t have Eric Berry for virtually all of those opening two games (and the remainder of the season) last year, and against the Falcons, they were without star defenders Tamba Hali (who was suspended) and Brandon Flowers. Against the Bills, everybody was healthy short one starter, safety Kendrick Lewis. It was his replacement that seemed to come up short in the key moments last Sunday.

Travis Daniels is nominally a cornerback, but with corner serving as one of Kansas City’s deepest positions, the Chiefs have been playing him as a safety alongside Berry and Abram Elam. Daniels got caught in no man’s land on some of Buffalo’s biggest plays, several of which involved Spiller. The most obvious example was Spiller’s 38-yard run in the second quarter, a play that saw Daniels come up in run support and look like, well, a cornerback playing safety.

On the play, the Chiefs line up with just two down linemen as part of what appears to be a Dime (six defensive back) package, a move that prevents them from occupying anybody up front and allows the Bills to get multiple linemen into the second level. Those linemen make huge blocks, as center Eric Wood seals Berry off from heading back across the line to make the play, while right tackle Chris Hairston simply destroys middle linebacker Derrick Johnson with a brutal pancaking. That left Daniels as the one guy unaccounted for who could make a play and limit the damage, but he doesn’t have a prayer. Daniels swoops in at a poor angle of attack toward the ballcarrier, and when he actually has his brief window to take down Spiller, it’s from the side at a total standstill while Spiller’s approaching full speed. He has no chance.

Daniels also wasn’t able to come up with another tackle on Stevie Johnson’s 49-yard touchdown reception in the third quarter. That came on a third-and-12 in which the Bills went with an empty backfield and the Chiefs responded with an empty secondary. It’s a clearly blown coverage from the Chiefs, with both defensive backs on that side of the field taking away the slot receiver’s clear-out while Johnson runs a slant underneath totally unmolested. It’s impossible to tell just whose fault the blown coverage was from the tape, but it’s a pretty clear screwup. The only person left who has a shot at stopping Johnson is Daniels, the deep safety on the play, but Daniels gets flat-footed, doesn’t establish a sound angle of pursuit, and Johnson runs right by him for an easy score. It’s a tough play for Daniels, but that sort of open-field tackle is the difference between touchdowns and field goals. Maybe Lewis makes that play.

That was one of several totally blown coverages by the Chiefs on the day. Spiller had a 19-yard reception split out as a wide receiver as part of another empty backfield set, one in which the Chiefs again simply didn’t cover a receiver and left Spiller streaking alone over the middle. When Kansas City was able to get every receiver covered, they repeatedly struggled to contain Fitzpatrick as a runner. The former Ivy League star was provided an easy 20-yard scramble to pick up a third-and-4 on Buffalo’s first scoring drive, and later ran for another first down on a busted screen under similar circumstances. These are bad signs for a defense that’s played together with mostly similar personnel for the past three seasons. It’s tempting to pin the problems on Romeo Crennel, but let’s leave it as a question mark for now.

Part of the reason that the Chiefs were flummoxed, of course, was Spiller. Buffalo’s game plan used Spiller in such diverse, imaginative ways that the Chiefs genuinely had to account for him on virtually every play. The Bills were comfortable using Spiller that way last year, too, but there are differences between this year and last. Spiller looks like a much improved player at times, and because Fred Jackson’s missed most of the season with a knee injury, he’s been the cornerstone of the Bills offense.

Through two games, Spiller has accrued 364 of Buffalo’s 769 yards from scrimmage. That’s 47.3 percent of their offensive yardage. To put that in context, consider that Maurice Jones-Drew only had 44.1 percent of the yardage produced by that grotesque Jaguars offense last season, and that’s the highest such figure in recent memory. The smaller sample size makes it easier to produce like that in two games as opposed to an entire season, but it’s abundantly clear on tape how the Bills are building their offense around Spiller.

Just as I noted with RG3 and the Redskins offense last week, the Bills used Spiller’s versatility to give the Chiefs varied looks on consecutive plays. On Spiller’s first six carries, he ran twice on a conventional play out of a traditional formation, once on a draw, once on an end-around with Brad Smith under center, once on an inside trap, and finally out of the Pistol on his first touchdown run. His second score came on a sweep out of the Pistol from the 5-yard line, a combination you’ll almost never see NFL teams put together. When teams line up in that sort of formation near the goal line, the result is almost always a passing play. Buffalo forced the Chiefs to respect their ability to run in that situation, and then later exploited it on a touchdown pass to Scott Chandler.

Part of the credit for this diversity has to go to Chan Gailey, one of the league’s most underrated offensive minds. Gailey is the same guy who brought the Pistol to the NFL in 2008, when injuries stuck him with Tyler Thigpen at quarterback. Most NFL offensive coordinators would have stuck with their traditional system and suffered through a dismal season; Gailey instead diversified his offense and got a competent season from a seventh-round pick. He’s gotten the most out of the talent in front of him in Buffalo during his three seasons with the team, and he’s joined teams like the Panthers and Redskins in incorporating spread-offense concepts from college into his playbook with Fitzpatrick.

Spiller also showed some impressive discipline as a runner during the first half. There were a number of plays in which Spiller looked a lot like Frank Gore, who almost hides and comes to a halt in the backfield while waiting for his hole to open. That’s a compliment, by the way: When Gore does that, it usually ends up being for the best. Spiller was able to pick up a handful of extra yards by doing so, although he did retreat to old habits and unnecessarily bounce the ball outside for losses on a couple of second-half carries. If Spiller can stay between the tackles and let his underrated offensive line do the work for him, he’ll be better off throughout the season.

In the end, I think there’s good news for both sides. The Chiefs defense is going to get better. They have just one sack over two games, a performance that Hali will undoubtedly help improve as the season goes along. Lewis should return to the lineup soon, a move that would get the subpar combination of Daniels and Abram Elam out of regular rotation. It also seems unlikely that Kansas City will continue to blow this many coverages on a regular basis. On the other hand, their schedule isn’t getting any easier; the Chiefs play New Orleans this Sunday and follow that with a game against San Diego the following week.

Meanwhile, the future is also bright for Spiller. He’s not going to average 10 yards per carry the rest of the way, but he’s in an offense that really takes advantage of the variety of skills he possesses. The Bills are a better team when Fred Jackson is healthy, but don’t be surprised if Spiller remains the starting back, even when Jackson returns from injury. We’re very likely witnessing his breakout season.

Real Madrid and Manchester City's Second Half to Remember