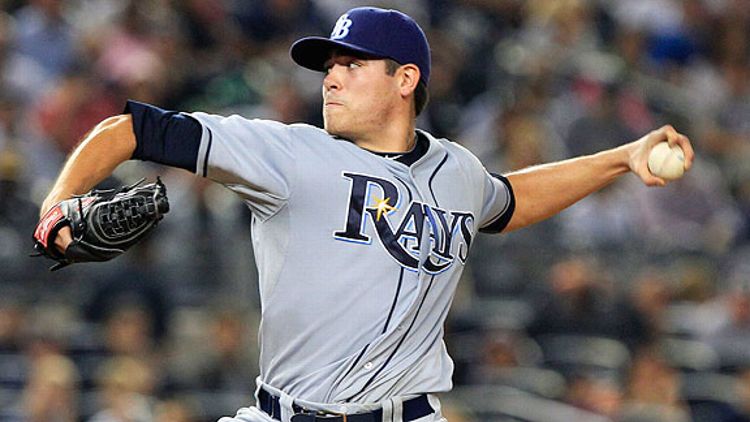 The Tampa Bay Rays just gave the Evan Longoria Contract to the guy who might become the pitching equivalent of Evan Longoria.

ESPN.com scoopmeister Jerry Crasnick reports the Rays have signed lefty pitching phenom Matt Moore to a five-year, $14 million contract. The deal includes three club options and various escalators which could max out Moore’s earnings at eight years, $40 million, buying out his first two years of free agency in the process.

Twenty-nine other teams don’t make this deal — or at least they’ve shown no willingness to hand out a contract under these circumstances before. Moore has pitched a grand total of 9 1/3 innings in his major league career. You’ll see other teams lock up promising young players before arbitration, in a few extreme cases just a year into their big league careers. Just not this soon.

The Rays have no such qualms. When Stu Sternberg first bought a share of the team, GM-to-be Andrew Friedman approached B.J. Upton and his agent while Upton was still in Triple-A, and broached the idea of a guaranteed, long-term major league contract. Upton demurred. Undaunted, the Rays tried again in late 2007, suggesting the idea to Evan Longoria and his agent Paul Cohen. Once the two sides had worked out the numbers, Cohen explained Longoria’s options in blunt terms: Sign the six-year, $17.5 million contract and he’d be set for life, even if he suffered a crippling injury tomorrow and never played a major league game. But if he became a star, the Rays would make out like bandits, getting colossal bargains during Longoria’s arbitration years, and buying out three free agent years with club options that would max out the deal at nine years, $47.5 million. Great for the Rays. But Longoria would lose millions in the process, and he and Cohen would look like fools for doing the deal.

Longoria thought about it, then took the deal, knowing he and his future family would never want for anything once he signed on the dotted line.

On April 12, 2008, Longoria crashed the major leagues. Just six days later, the deal was done. As the Rays hoped, Longoria became a star. Given his ability and microscopic contract, he’s now so wildly underpaid that FanGraphs dubbed him the best value in baseball … in 2008, 2009, 2010, and 2011.

Moore has Longoria-like upside. Considered the best pitching prospect in the game (or at worst, top three) Moore obliterated the minor leagues, striking out an unfathomable 700 batters in 497 innings (12.7 strikeouts per 9 innings). A wild thrower at first, Moore refined his command and control, ending his minor league career with a strikeout-to-walk rate of nearly 5-to-1 in 2011. He pitched very well in his short September stint in St. Pete, striking out 15 batters and walking three in those 9 1/3 innings, then showed flashes of greatness in the playoffs, yielding just one run over 10 ALDS innings. Relatively small for an elite pitching prospect at a listed 6’2″, 205, Moore relies on a delivery that scouts consider one of the smoothest and most efficient in the game. That delivery helps Moore dial his fastball into the mid-to-high 90s with little apparent effort, which bodes well for both his long-term performance, and his health.

This raises one obvious question: Why would Moore sign this deal, given the gigantic bargain the Rays got from Longoria (and James Shields, and Carl Crawford) in a long-term contract back-ended by multiple club options? The A’s Brett Anderson offers a cautionary tale. A talented, highly-acclaimed lefty, Anderson enjoyed a strong rookie season in 2009, prompting the A’s to give him a four-year, $12.5 million deal with two club options. Then the injuries started. Anderson made just 19 starts in 2010 and 13 in 2011 before his arm finally gave out. On July 14, he had Tommy John surgery, which means we might not see him again until 2013. Like Longoria, Moore knows he is now set for life no matter what happens from here. Given the much higher attrition rate among pitchers compared to position players, it actually makes more sense for Moore to sign his deal than it did for Longoria to sign his, hindsight aside.

As for the Rays, this is just their latest example of creative thinking. But you can also chalk this up to necessity being the mother of invention. The Rays have miserable revenue streams, weighed down by a fragmented market, a brutal economy, a below-market TV deal, and attendance that continues to disappoint. Meanwhile they have to find a way to compete in the AL East, the worst spot in baseball for a poor team trying to topple the Yankees and Red Sox. Thanks to shrewd scouting and player development, well-timed trades, and multiple team-friendly contracts like this one, they’ve bagged three playoff berths in the past four seasons.

The Rays’ strategy of higher-risk contracts might eventually blow up in their faces, derailing the team’s unlikely run of success (if their perennial poverty doesn’t get them first). But right now, you can’t help but think they just hit the jackpot. Again.

Is Albert Pujols Really Worth $250 Million?
Live! From Baseball’s Winter Meetings
Breaking Down The Baseball Hall of Fame Ballot