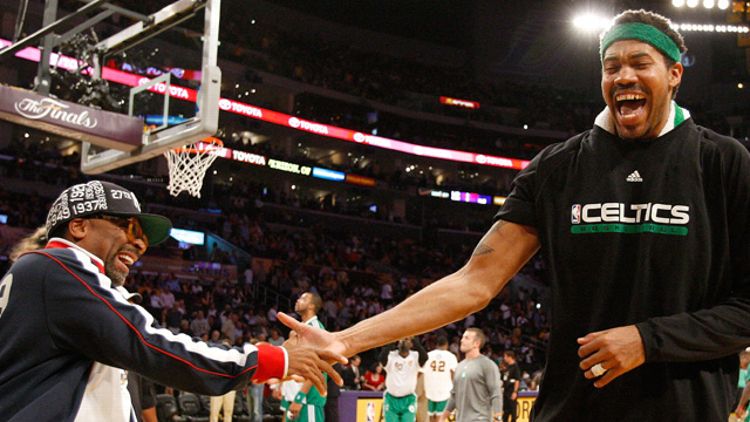 When the season opens, the Knicks frontcourt — Amar’e Stoudemire, Tyson Chandler, Wallace, and Marcus Camby — will limp into the season at an average age of 34.25. Once you factor in Kurt Thomas (39) and properly carbon-date Amar’e’s knees (105), that number starts pushing up against 40. Given that we just saw an NBA Finals with one of the youngest teams in the history of the league playing against Super LeBron, the Knicks’ decision to “go old, slow, and cranky” doesn’t make much sense.

For the sake of argument, let’s try to present the best-case scenario for one of the weirdest offseasons in recent league history. Stoudemire can still score, but might be the worst defensive player in the league. Chandler, despite his well-deserved defensive accolades, excels more as a help-side/rim protector than as a one-on-one post defender. He, in theory, protects Amar’e. At his peak, Rasheed Wallace was one of the best post defenders the league had ever seen. Wallace, in theory, protects Chandler. Marcus Camby does (or, at least, used to do) a little bit of everything on the defensive end. He, again, in theory, provides insurance for pretty much everything that can go wrong. And so if you put all those things together, along with the fact that Chandler, Rasheed, and Camby don’t need the ball on offense, there’s an argument to be made that the Knicks frontcourt will form like geriatric Voltron and lock down the paint.

Two problems with this argument: First, all those guys are old. Of the four who look to get the most playing time, only Chandler is in the prime of his career. Rasheed Wallace has not played an NBA game since the 2010 NBA Finals. Marcus Camby actually put up decent defensive numbers last year — in 40 games with Portland, Camby’s opponents shot just 43.6 percent and scored just 0.811 points per possession against him. Those numbers stayed pretty constant during Camby’s 19 games with the Houston Rockets (all stats courtesy of Synergy Sports). But his totals fell across the board, mostly notably his minutes per game. At this point, it seems unreasonable to expect Wallace, Camby, or Kurt Thomas to play for more than 20 minutes per game. For a team like the Knicks, who could finish with anywhere between 35 and 50 wins, the margin between the playoffs and the lottery comes, in large part, from the development of players who can give unexpected contributions off the bench. You know, like that dude who came from out of nowhere and carried the Knicks to their longest winning streak of the season. By loading up their roster with old dudes with no ceiling (we haven’t even broached the Jason Kidd problem yet), the Knicks have lashed themselves to an older version of last year’s roster. Which, you know, won exactly one playoff game.

The second problem is that even if the Knicks frontcourt throws together the best geriatric ensemble performance since Golden Girls went off the air, what, really, would it accomplish in the Eastern Conference? Is it worth plugging up roster space that could be used for young players if the only reward is that you’ll have a better chance at stopping Andrew Bynum and Roy Hibbert in the playoffs? And even if your only goal is to make it out of the first round of the playoffs, weren’t the Knicks already doing all right with defensive big men? Sure, Chandler has his flaws on defense, but they’re magnified by Stoudemire’s incompetence. Signing a bunch of old veterans who more or less do the same thing in the hopes that it will cover up the fact that your maxed-out superstar refuses to play a shred of defense is about as logical as adding a Blaupunkt tape deck, some spotty tweeters, and a Car Discman to a rusted-out ’87 Camaro that already has a booming sound system.

There are times when it makes sense to bring on old superstars to play specific roles on already-stacked teams. The ’04 Lakers had Gary Payton, Karl Malone, and Horace Grant on a roster with Kobe Bryant and Shaquille O’Neal. They ultimately lost to the Pistons in the Finals, but that result doesn’t invalidate the moves. Malone, before going down to injury, had embraced his role as a tough defender. Payton didn’t take, but there’s never been a roster in which every new pickup has panned out. I have very little doubt that Ray Allen will improve the Heat. But for that formula to work, the team has to already be a championship contender. The Knicks are far from that. The problem, as always, with the Knicks, is that the only people in the NBA who would rank New York among the league’s elite teams also happen to be the ones running the franchise.

Rasheed, you are my favorite player of all time, but if you were looking for a prettier end to your career than your year in Boston, you might have picked the worst team possible.