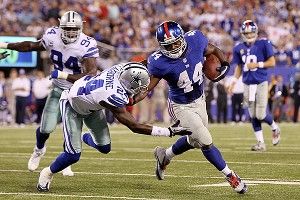 I may be the only degenerate football fan in the country who is going to miss the replacement refs. Not because I thought they were competent or belonged anywhere near an NFL stadium, but because during the short time they were employed, I enjoyed three straight winning weeks with my prop bets. Not sure that has ever happened before. Certainly it never will again.

Not to mention — I had big plans for Week 4. There was talk of players taking a knee to protest the replacements. I was hoping the shitty refs would stay, and the players would sit, so I could cash in on a 15-team all “under” parlay. All games end up 0-0?!! $1 would’ve paid $16,306.

But now that the lockout has ended, that’s all just a pipe dream. And I’m telling you now — if my luck starts to change, Ed Hochuli and I are gonna have a fistfight. (He must, of course, first agree to a steroid test.)

This year, I’m 84,000 jermajesties* in the plus. Let’s keep it rolling with Week 4 and remember — when picking my favorite games, I always keep in mind that it’s not about the X’s and O’s, it’s about the Jims and Joes. (If someone ever figures out what that means, please drop me a line.)

Packers to score over 31 points against the Saints

It’s the gift that keeps on giving. Betting on the Saints’ opponent to score more than their designated total has now paid out three weeks in a row. Not to mention — this week, New Orleans (24th in pass defense and 32nd against the run) is up against an angry Packers squad that might be owed a pass interference call or 20. I’m taking the Packers to go over in the Lethal Weapon 3: Diplomatic Immunity Bowl. 30,000 jermajesties

Last week, I picked C.J. Spiller to lead the league in rushing — then he promptly went and buried his shoulder deep into the Ralph Wilson Stadium turf. Fingers crossed for a repeat jinxing. #extremelybitterCowboysfan. 50 jermajesties

Similar theory here. One hundred thirty-five total points scored in the two games in their 2011 encounters. FYI: For this same bet, Sportsbook.com and others list the Steelers at 15/1 and the Colts at 18/1. Those odds are far too low for two teams who have a bye this week. Shop it around — I’m sure you can do better. 2,000 jermajesties each

After five monstrous scoring plays for the Titans last week, I feel like the Music City goes miracle-less for a while — especially against the Texans’ stout defense. Playing the under on this one for both teams. 12,000 jermajesties

Poor Jason Witten. The guy is obviously not himself. Rumor has it he’s carrying between five and 10 pounds’ extra padding to protect his injured spleen. That’s like duct-taping Darren Sproles to your chest for three hours. Regardless, look for Tony Romo to get Witten involved in the red zone to boost his confidence. As for the Hester bet — I’ve been saying he’s due all month, and what better time to run one back than this week against my beloved Cowboys and their nightmare special teams group. 2,000 jermajesties each

Battle of the Smiths: Which is higher: Emmitt’s combined score this Monday on Dancing With the Stars vs. the number of celebrations by Steve after each four-yard catch this weekend plus Alex’s QB rating against the Jets?

Let’s all agree not to watch Dancing With the Stars so that we’ll never know the result of this wager.

19/1 odds that the NFL record of 38 days between arrests will never be tied or broken.

It was reported that the 38 days between Chad Johnson’s preseason domestic violence incident and Michael Turner’s DUI was the longest time between arrests for NFL players since these ridiculous stats started being kept in 2007. Ridiculous or not — this one ain’t getting broken. Not if Pacman, Ndamukong Suh, or the 49ers mascot, Sourdough Sam, have anything to say about it.

75/1 odds that instead of fixing his mangled ear with plastic surgery, Texans QB Matt Schaub hires Mike Tyson to bite a chunk off the other one to even it out

Over/under 10 — How fired on a scale of 1-10 is the Cowboys employee who is responsible for letting a fetish dating website for cowboys (not necessarily from Dallas) buy the rights to Cowboys.com

I say at least a 10. On the other hand, it made sense — just in time to capitalize off the Brokeback Mountain craze seven years ago.

Over/under 39.5 Foot Locker employees nationwide who are fired/quit due to backlash from wise-ass customers giving them shit about poor officiating

Are we over the Foot Locker references with regard to this replacement ref scandal? Fine — I’ll try a different approach.

Over/under 6.5 days before someone pitches Hollywood a reality show in which Lance Easley and Derrick Rhone-Dunn (the two refs involved in Goldengate) disagree on real-life easy-to-call situations, like whether a Taco Bell bean burrito contains real beans

Over/under the year 2019.5 before Roger Goodell offers the publicly owned Green Bay Packers rights to host the Super Bowl as part of his reparations for allowing the worst call in NFL history to stand

Obviously this was an awful screw job. But there’s something delightful about tens of thousands of Midwesterners referring to the replacement refs as “a joke” while wearing foam cheese on their heads.

Over/under 1.5 “Yeah, bitch” exchanges between myself and Emmy winner Aaron Paul at a post-Emmy party Sunday

Over. Two total. Am I dropping names? Yeah, bitch, I am!

One more thing: If the NFL ever runs into another labor dispute with the referees, they can rest assured there are plenty of suitable replacements out there. Like the ones I found Tuesday afternoon on Hollywood Boulevard.

They’ll do a fine job, so long as their pension plan isn’t replaced with fake spiders.