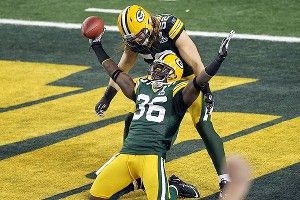 I’ve spent most of my 20 or so years watching football rooting against the Packers. The Bears were often on the wrong side of things when I was growing up, but those games against Green Bay always mattered, and I’m guessing they will as long as football does. In that haze of fandom, there were plenty of Packers that earned a begrudging respect, but only three who managed to truly endear themselves through those two games every year. Two, Brett Favre and Charles Woodson, will one day give speeches and wear gold jackets. The other is Nick Collins.

The news today, according to Jason La Canfora of CBSSports.com, is that the 29-year-old safety’s football career is likely over. From 2008 to 2010, Collins was one of the best defenders in football. He tallied 17 interceptions in those three seasons and went to the Pro Bowl after each. In Week 2 of last season, eight months removed from the Packers’ Super Bowl win, Collins was carted off the field after a collision with Panthers running back Jonathan Stewart. Collins sustained a neck injury that required surgery and ended his season, and in April of this year, Green Bay cut its star safety, unsure of whether he would be able to return because of recurring neck problems. That question now has an answer.

Initially, Collins had hoped to return to the game, and despite a regular training regimen, doctors recently advised him against professional football. In a way, the decision is welcome news for anyone with concern over a young man’s long-term health, and I count myself among those. My regret is that there won’t be any more football from a player who was so much fun to watch.

Collins’s greatest moment came on the game’s greatest stage, and in what no one expected to be his third-to-last game. With about three minutes remaining in the first quarter of Super Bowl XLV, Collins broke from his deep half of the field on a ball intended for Steelers receiver Mike Wallace, easily intercepting it at Pittsburgh’s 36-yard line. What followed was a return that saw Collins weave back and forth between a handful of pursuers before eventually leaping into the end zone to give Green Bay a 14-0 lead it would ride to the team’s fourth Super Bowl.

These are the plays Collins made with as much flair as anyone in the world not named Ed Reed. In six seasons, he returned four interceptions for touchdowns, including three of his seven picks in 2008. Certain players, like Collins, like Reed, seemed blessed with a preternatural feel for where the ball would be and when, and it led to the sort of plays few others could produce. It’s special to watch someone so blessed with the haecceity of a football player, and missing that is one thing on which Packers fans and I can certainly agree.