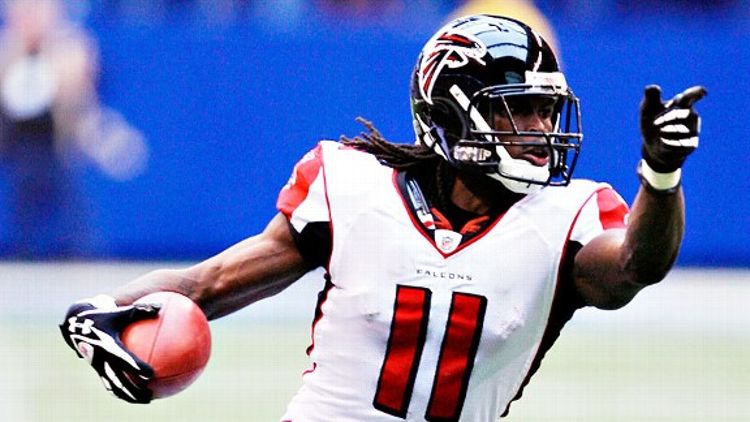 1. Julio Jones, Atlanta Falcons
Nobody is going to call the Colts stiff competition (or competition, really), but Julio Jones played Sunday like a robot sent from the future to destroy us all. His falling catch in triple coverage is not something humans should be able to do.

2. Andre3000, rapper
Just so we’re all clear if you make the album Stankonia and then show up on the new Drake album with the line, “Now that both of us are colorblind, ’cause the other side looks greener/Which leaves your turf in a Boise State, can’t see a play or the team,” chances are you will find yourself very, very high in a power rankings list called Rankonia. Just FYI. Take care.

4. Lenny Dykstra, investment consultant
As suggested by our human frailty editor, David Jacoby. Dykstra is the “face” of one of the craziest sports-related stories you’re going to come across all year. Dykstra was supposed to fight Jose Canseco in Hollywood this past weekend in an event that was organized by a Broomall, PA. man who is “no longer allowed to legally promote fights in Pennsylvania after pleading to charges of promoting without a license and fight-fixing” AND a Nigerian-born Internet mogul. This fight didn’t happen and now Dykstra is saying he never even agreed to get into the squared circle with the one-time Bash Brother.

I’m personally shocked at all this. A fight promoter accused of fight-fixing? A Nigerian internet mogul? Stock market guru Lenny Dykstra? Jose Canseco? The table was set! All they had to do was eat the meal. Can’t believe this didn’t go off without a hitch.

5. Marcelo Bielsa, manager, Athletic Bilbao
For those who don’t actively follow South American or Spanish football, a) what’s wrong with you? and b) meet this genius. Bielsa, a one-time Argentina national coach who led Chile on a breathtaking World Cup run last summer, is now guiding the Basque team Athletic Bilbao.

After a rocky La Liga start, the eccentric tactical genius, who employs little-used formations like 3-3-1-3 and drills his players to play aesthetically beautiful and athletically demanding football, has righted Bilbao’s ship and over the weekend he offered up a managerial masterclass against Barcelona, drawing with the La Liga and Champions League winners in what might have been the best football match of the European season, to date. Pep Guardiola, the Barcelona boss called the match, “un canto al futbol,” an ode to the game, and said of Bielsa, “I would have liked to have played under him: he is different to everyone else.”

6. Aaron Hernandez, New England Patriots
The Pats might be slumping, but at least this beast still has the best touchdown celebration in the league.

7. LeSean McCoy, Philadelphia Eagles
The Eagles might be slumping, but at least they have someone who can do this.

8. Pius Heinz, 2011 WSOP champion
You gotta love a sport where the trophy presentation is actually a dude putting on a bracelet in what looks like a Birdman video. Nice work if you can bluff it.

But you mostly have to love him because after beating Kansas State this past weekend, in the shadow of the Game of the Century, Gundy had the stones to say, “I’m not so sure they shouldn’t have been watching our game.”

10. Yao Ming, college student
The average student height at Shanghai’s Jiao Tong University just got a little taller. Sometimes it’s important to remember that this guy was the absolute best. Yo! Yao!

The Fall of Fat Albert ... Plus Five Others Who Should Follow