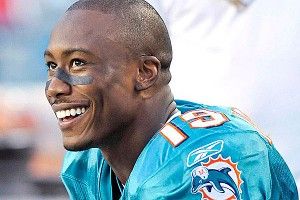 1. Brandon Marshall, Will Now Winter in Chicago
Bill Simmons chimes on in on the Bears’ big trade acquisition: “When you’re an All-Pro WR on a team that’s trying to do everything it can to sign Peyton Manning, only you get dumped for two third-round picks right in the middle of the courting process … I mean, that can’t be a good sign.”

2. Jarrad Page, Bo Knows!
Bill Barnwell dusts off his no. 16 Royals jersey: “It is my duty to nominate former Chiefs and Patriots safety Jarrad Page, who appears to have finished a somewhat bizarre six-year NFL career by signing a minor-league contract with the Los Angeles Dodgers to play baseball. Page, who apparently impressed the Dodgers in an open tryout, was selected three different times in the MLB draft before moving on to football. Page spent two years playing baseball alongside football at UCLA, and, well, his performance record isn’t sterling. In 221 at-bats over two years, Page put up a .195/.270/.285 line while striking out 94 times. Because we grew up in the early nineties, though, we are nostalgic for baseball/football crossover players and want them to return. So yay Jarrad Page!”

3. Evan Turner, Scottie Pippen, Basically
In four games as a starter, the former no. 2 overall pick is averaging 17 points, 12 rebounds, and 3.5 assists. He spent the first year and a half of his career doing some interesting things, some silly things, or nothing really at all. But ever since he replaced Jodie Meeks in the Sixers’ starting lineup, he’s been a powerhouse. Forget Linsanity (you probably already have) (what up, Knicks), this is EVANDEMONIUM.

4. Courtney the Model, Put a Ring on It
I am absolutely sure that whatever Mark Lisanti is talking about here is dead on-the-money. “She executed her plan flawlessly, dominated the game, and collected the final rose. For her trouble, she’s won up to six months of a ‘relationship’ that will likely not end in marriage, 10-20 pages of unflattering Us Weekly coverage, and the title of Greatest of All Time.”

6. Clark Kellogg, Says “Your Move, Brian Williams”
Brian Kearns Phillips picks the other guy who got to interview POTUS: “CBS college basketball fellow Clark Kellogg, who — despite being only moderately famous as a foreign-policy expert — somehow landed an exclusive joint interview with British Prime Minister David Cameron and American Guy Who Happens to Like Visiting Ohio Barack Obama during halftime of the Mississippi Valley State-Western Kentucky game last night. Coaxed along by Kellogg’s incisive questioning, the two world leaders offered a candid, at times hauntingly personal breakdown of how they would use screens to attack Valley’s full-court press. As of press time, David Cameron’s opinion on ‘value-tility’ remained ‘What?'”

8. Snuggle Couch, Where the Wolfpack Rest
Michael Weinreb is a fan of mid-century American furniture that can support a team-sized pile-on: “I don’t care if NC State loses to San Diego State by 19. That snuggle couch should be enshrined in Springfield.”

9. Reggie Wayne, Coolest Customer? Or the COOLEST Customer
Last week, when some folks thought Peyton Manning might wind up taking his talents to South Beach, Reggie Wayne, a longtime target for Manning on the Colts, made this very hard-to-get statement regarding the possibility of teaming with his old QB on the Dolphins: “My phone is working. It’s definitely working. I got all my bars. Whenever that phone rings, trust me, I’ll answer.” Very well played, man. So relaxed. Tuesday, Reggie Wayne reportedly re-signed with the Colts. That went well.

Free Agency Day 1: The Insightful and the Incoherent