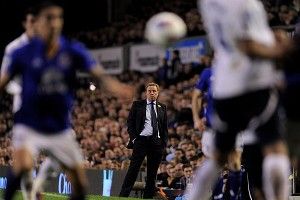 What an uneventful weekend of football it was. Nothing to see here. Particularly not Tottenham’s latest lapse against Everton, and definitely not Manchester City handing pole position to crosstown rivals Manchester United following their 1-0 loss to Welsh Barcelona, Swansea City. In fact, it was so uneventful that Michael Davies took the weekend off to sample the tasteful debauchery available on the golf courses of South Carolina.

That leaves Man in Blazer Roger Bennett to address the nation all by his lonesome, like a poor man’s Spalding Gray. And in honor of the humdrum weekend over in England, Rog is left to celebrate the return of Major League Soccer by welcoming His Excellency, Commissioner Don Garber, to discuss his formative years at the NFL, the state of MLS finances, and what goes through his mind when he straddles his big ol’ Harley. Rog then transitions to more serious matters with the help of another mover and shaker from an MLS, Portland’s iconic mascot, Timber Joey. The classically trained logger lays bare his thoughts on love, life, and chainsaw circumcision.