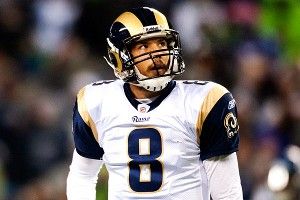 1. Sam Bradford, Thrives on Pressure (He’d Better!)
Bill Simmons gives the Rams quarterback a really heartwarming pep talk: “Hey, Sam? Your Rams are about to trade the electric, 4.41-running, Heisman-winning, acronym-nickname-ready franchise-saving RG3 for a shitload of players and picks. If your team sucks next season right as RG3 is kicking ass in Cleveland/Washington/Denver/wherever, the fans are going to … oh, wait, the Rams barely have any fans. But still.”

2. Pat Knight, Motivational Speaker
Chuck Klosterman nominates the Lamar coach, who truly is his father’s son: “Pat Knight, for delivering a press conference that fits under the rare media classification of ‘unnecessarily honest.'”


3. Carli Shultis, University of Georgia Soccer Player
Rembert Browne delivers a tale of law and order from Georgia. “My take on this is if you’re going to get caught by the law once in your life, have it be for the time you stuffed $1.06 worth of hash browns down your pants. What a legend.” I would like to add, without any real additional comment, a list of places Shultis is now banned from: The Bulldog Café, Tate Café, Taste of Home Café, Red Clay Café, Dawg Snacks, Village Market, DogBone, Bone Appétit, The Cremery, ‘Tween the Pages, Dawg Bites, and Jittery Joes.

4. Meryl Streep, Sore Winner
Don’t worry, Rooney Mara, Mark Lisanti is angry for you: “Went so long between Oscar wins (29 years!) she forgot to do that thing where she individually celebrates each of the other losing nominees in her category. Guess that bullshit only applies to the lesser awards. She won an Oscar, bitch!”

5. Adrien Broner, The Fighter
Rafe Bartholomew nominates this Cincy boxer, who wears his sunglasses at night (and indoors) (on the way to a fight): “Adrien Broner’s ring walk from Saturday night’s super featherweight championship bout against Eloy Perez. I can’t tell if his rapping is any good, but based on visual cues he might be rhyming about Sbarro’s Chicken Vesuvio. Also, how did Roy Jones, who called the fight on HBO, forget to remind us about ‘Ya’ll Must Have Forgot’?”

6. LeBron James, THE CLOSER
Brian Phillips accentuates the positives: “LeBron James. Liverpool won the Carling Cup, so it’s been a great week for him, right?”

7. Wes Welker, Still Hasn’t Returned Moneyball to Netflix
Bill Barnwell takes issue with the Patriots wide receiver’s possible future in scouting: “‘First day of watching the combine. What a waste of time! Just watch the film.’ With Welker being the first person to advance the stunning ‘Just watch the film’ gambit, rumor has it that a group of deflated Indianapolis businessmen have decided to shut down next year’s Combine. Ironically, the Combine should have helped Welker: Despite his diminutive nature, it would have given him a chance to show off his hands and his agility alongside far more hyped players. Instead, the scouts just watched the tape on Welker and said ‘gimmick offense’ before wrongly turning him away.”

8. Cristiano Ronaldo, Possibly Getting Bored of Being So Good
This is offensive:

9. Delaware State, Still Only the Second-Most-Unlucky Hornets
According to Michael Weinreb, “premature jubilation is a serious thing, man.”

10. The Track at the Daytona International Speedway, ON FIRE

Via Triangle co-editor Sarah Larimer, who always drives the speed limit: “I don’t really care for NASCAR, but you know what I do love? NIGHT FIRES ON RACE TRACKS. (In which there are no injuries or deaths.) I don’t think I’m alone in this.”