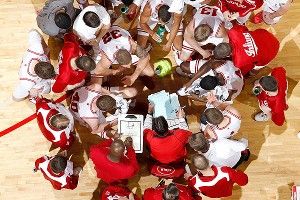 Let me take you, for a brief moment, back to March 21, 2002. It was a Thursday, and the Duke Blue Devils were the defending national champions. That team featured the likes of Jason Williams, Carlos Boozer, Mike Dunleavy, and Chris Duhon. They’d lost Shane Battier from the championship team, but it hardly seemed to matter. The only team that could possibly stand in the way of a repeat was the hated Maryland Terrapins, advancing on the other side of the bracket behind the inexorable brilliance of Juan Dixon.

En route to a certain rematch, Duke met the 5-seed Indiana Hoosiers in the Sweet 16 at Rupp Arena in Kentucky. The Blue Devils quickly rolled out to a 17-point lead, and it looked like victory was inevitable. Then things got weird. Indiana grabbed rebound after rebound, and they started getting to the line. Duke went cold. Jared Jeffries, who would finish with 24 points and 15 rebounds, went hot. The Hoosiers racked up the offensive boards, finishing with 20 (and an incredible 60.6 percent offensive rebounding rate, meaning they rebounded more of their missed shots than Duke did by a healthy margin).

The lead began to dwindle. The crowd in Lexington, with no love lost for the Blue Devils, was firmly on Indiana’s side, urging the comeback. Finally, with two minutes left, the Hoosiers somehow tied the game and then took the lead on a Tom Coverdale jumper. They widened it as the game wore down. On Duke’s last possession of the game, trailing by four, the incredible Jason Williams somehow got fouled while shooting a 3, and made the shot. Indiana only needed to avoid fouling to win the game, but Williams always had a bit of magic in him.

But what he also had was a mental block at the foul line, and it reemerged at the worst moment. The shot missed, Boozer’s tip was off-track, and the Hoosiers pulled off a miracle upset. Coach K, staggered but not shocked, came out with one of the best quotes of all time: “I’m not stunned,” he said. “I’m 55 and I need a hip replaced. I coach a game where I know we can lose every time we go on the court.” Jason Williams left the court in tears, his college playing days over. A little more than a year later, a motorcycle accident would essentially end his career for good.

But that Hoosier team wasn’t finished. They hit 15-of-19 from 3-point range against Kent State in the Elite Eight (for a ridiculous 82.1 effective field goal percentage) to advance easily to the Final Four, where they continued to shoot flames (8-of-13 from 3) and attack the basket in a nine-point win over Oklahoma. Mike Davis’ coaching stock had never been higher, and all it would take was one more great night to take home an improbable national title. But then they met the Terrapins, who had always been destined to win that year, and it went to pieces. The Hoosiers couldn’t shoot, couldn’t board, couldn’t get to the line, and Dixon and Gary Williams had their championship.

The point of this story, as you’ve probably gleaned, is that the 2012 Hoosiers bear more than a passing similarity to the team from a decade ago. Let’s count the reasons.

(Free gimmick for Indiana fans: The Ola Depot. Everyone in that section wears conductor caps and Oladipo’s number. I’m not sure what else happens … maybe those little wooden train whistles whenever he scores? “Chugga-chugga” noises when he has the ball? Think about it.)

You get the idea — this is a scary team to face in the tournament. That was on display Tuesday night, when the no. 20 Hoosiers ended no. 5 Michigan State’s seven-game win streak with a 70-55 shellacking. Most of the fearsome qualities were on display; Verdell Jones III and Oladipo got to the line early and often. In Oladipo’s case, he attacked the Michigan State defense — the second most efficient in Division I, by the way — and benefited from the fact that the Spartans were hesitant to help and leave Indiana’s great shooters on the perimeter. Zeller finished with 18 points on 7-of-12, showing the incredible court sense he shares with his brother as well as the ability to get to the line and pass from the post. Christian Watford and Jordan Hulls each buried two 3s, and Watford pulled down 14 boards. The rebounding was a draw with the Spartans, but the Hoosiers triumphed in every other major category.

Trivia: How many other Big Ten teams have scored 70 points against Michigan State this season?
Answer: One. Northwestern, weirdly enough.

When the Hoosiers click on all cylinders, as they did Tuesday night, they’re one of the toughest teams in the country. There’s essentially no way to defend their various modes of attack, as Tom Izzo’s excellent unit found out. They can beat absolutely anyone.

But the “clicking on all cylinders” part is where it gets tricky. Indiana has dropped seven Big Ten games, and some of them — Minnesota, Iowa, Nebraska — weren’t against the cream of the crop. On the other hand, they’ve now had three great wins against Top 5 opponents — Ohio State, Kentucky, Michigan State.

Tom Crean finished his first year at Indiana by losing 10 straight games. He lost 11 of 12 to finish his second year, and his third year, 2011, ended with nine straight defeats. This is the first time his Hoosiers have had their top form as the regular season winds to a close, and they’ll be a monster 4- or 5-seed wherever they end up. Just as in 2002, they have the potential to wreak havoc on the 1-seed in their region. The question — unanswerable for now — is whether they can get there. March is coming.