We Can Play Defense, Too: Real Madrid Bring a Katana to Atlético Madrid’s Knife Fight 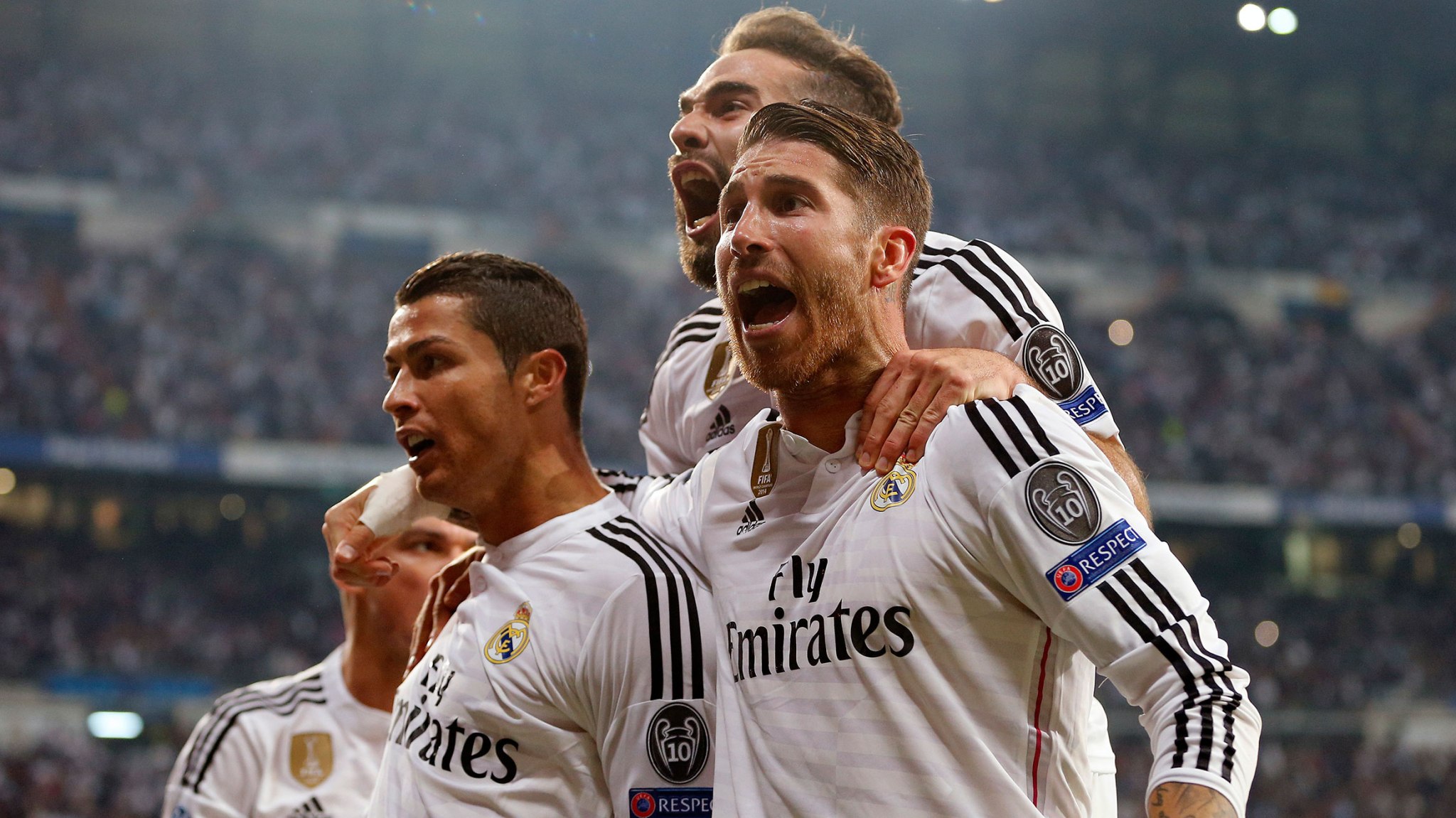 The eighth Madrid derby of the season was not for the faint of heart, but they never are. So what gave? While it took until the 87th minute, Carlo Ancelotti found a way to beat his crosstown rivals for the first time this year. Why was Real Madrid able to win a match that was less a soccer game and more a late ’90s brawl between the New York Knicks and Miami Heat? It probably has something to do with this: Real scrapped their pretty attacking approach and got down and dirty with some defense.

For the first seven matches against Atlético Madrid this season, Real insisted on bringing their passing boots to what was always a knife fight. It’s nobody’s fault — it’s just how this team is built. When your most defensive midfielder is Toni Kroos, your game plan should revolve around possessing the ball. But for all the highs it produced — most notably a 22-game winning streak — the blueprint kept failing against Diego Simeone’s side.

However, Ancelotti ran out of options Wednesday. With Gareth Bale, Karim Benzema, Luka Modric, and Marcelo all out through injury or suspension, Real had two choices: Stick with the game plan, try to plug in the backups, and change as little as possible, or recognize that maybe it was time for something different. Ancelotti chose door no. 2.

When Real have struggled this year, it’s been because their well-oiled machine has been missing critical cogs. Ancelotti has managed to create a side that gets the most out of a tremendously talented (and expensive) front six, plus Marcelo at left back. To do that, though, he’s had to implement a system that relies heavily on each of those players’ unique skills. So although Real have a ton of talented replacements, no two guys are exactly the same, which means the system has often ground to a points-dropping halt when even just one or two attacking members of the preferred starting XI were missing.

Yesterday, instead of playing Jesé for Bale and Asier Illarramendi for Modric — the proverbial “next men up,” despite lacking the full dynamic skill sets of the players they’d be replacing — Ancelloti plugged center back Sergio Ramos into the midfield and Javier Hernández, a classic goal-poaching striker, up top. The result looked nothing like the hybrid, lopsided 4-3-3/4-4-2 that Real have used this year. Instead, they ended up in a fairly vanilla 4-2-3-1 with Ramos joining Kroos in the double pivot and Cristiano Ronaldo playing in an interchanging band of three with James Rodríguez and Isco.

For once, Real weren’t taken out of their game by Atlético’s tough defensive stance; this time, they were prepared for it. Except there should have been a downside to that decision. Playing Ramos in midfield could have left the team vulnerable to a side that worked with the ball in possession and forced the defender to cover the wider spaces of midfield he’s less accustomed to. Yet, that’s simply not who Atlético are, nor what they’re good at. And Real made sure not to let Koke, Atletico’s best ball-player, get into the game. The 23-year-old tied for the team lead with 40 passes played, but only 15 of them were forward, and only 10 in the attacking third. 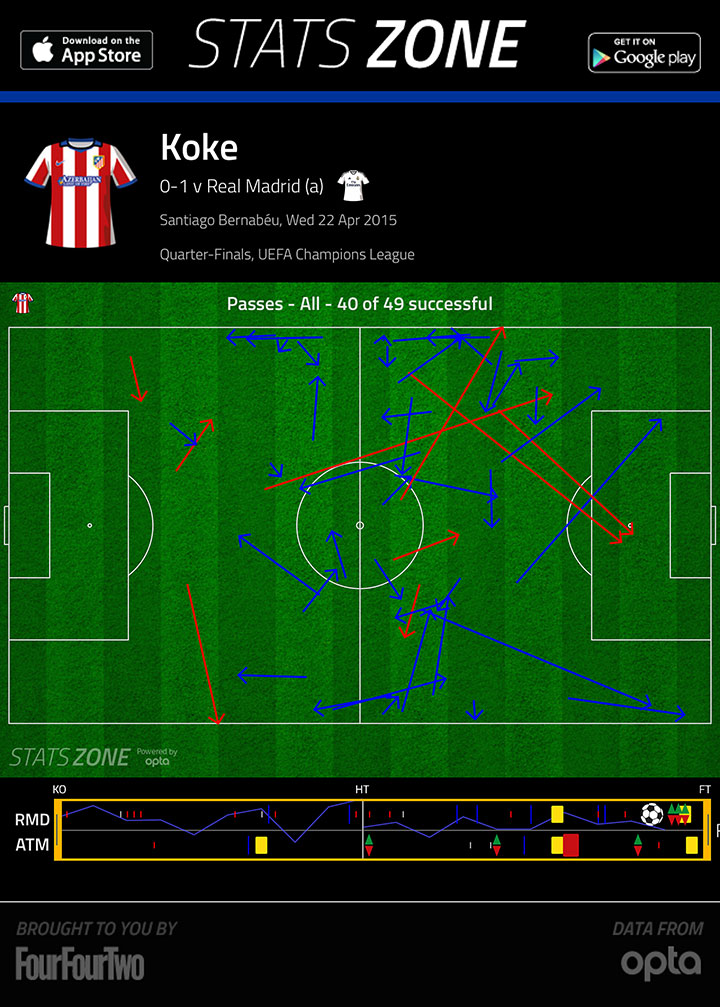 Each of Simeone’s first two substitutions seemed designed in part to try to find Koke more space. When Saúl came off at halftime, Koke moved from the center toward the left flank. And when Simeone yanked Antoine Griezmann, the team’s best goal-scoring threat, who had been quiet for a large part of the game partially due to the inability of Koke and Atlético’s other midfielders to release him toward goal, it was so he could move Koke farther up the field. None of the tweaks mattered, though, and Real took away what Atlético wanted to do.

Without the threat of a vertical passer, Atlético were unable to consistently make inroads into Real’s half; they couldn’t counter and couldn’t create the set-piece opportunities on which they thrive. Real did an excellent job limiting their fouls to areas from which Atlético couldn’t threaten their goal. No counterattacks and no set pieces meant an already defensively oriented Atlético side had almost no ability to score. 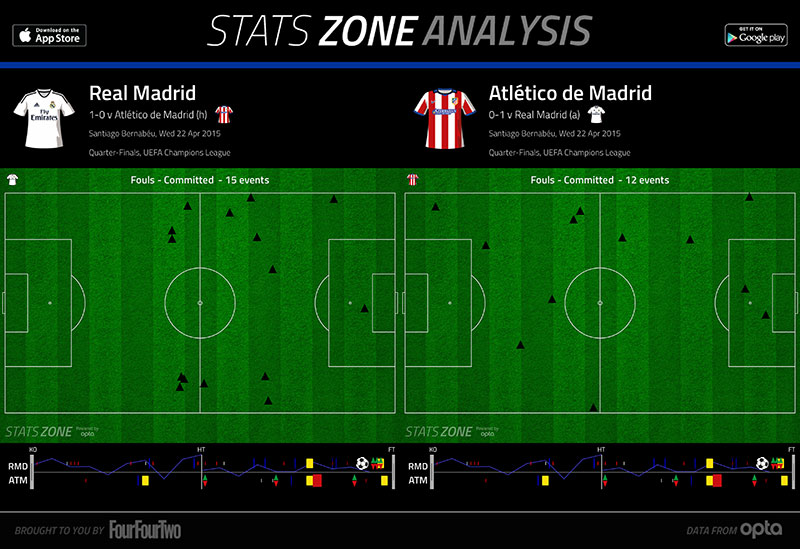 Ultimately, it took a red card to Arda Turan before Real capitalized. Ronaldo got free and created a gaping net for Hernández to slot the ball into.

By that time, Atlético had retreated completely into a “defense only, let’s try to get this to penalties” approach, and that’s perfectly reasonable when you’re down a man on the road against Real Madrid. Still, it’s hard not to wonder what Simeone would have done with just a few more arrows in his quiver. Last year’s version of this squad had Diego Costa and David Villa, plus a slight bit of extra versatility and creativity in the attacking ranks. This year, even without the red card, Atlético only had Fernando Torres sitting on the bench as an option to try to change the game.

In 2014, Atlético could sucker you into a brawl and then break out a couple of sick parkour moves as they ran and flipped their way into a goal before you’d know what hit you. This year, it’s been knives at dusk or nothing at all. For once, Real was ready. And this time they brought their own sharper blade.

Taking Baseball’s Pulse: Checking Up on the Trends Transforming the Game

Five Reasons the Senators Will Beat the Canadiens