Five Reasons the Senators Will Beat the Canadiens 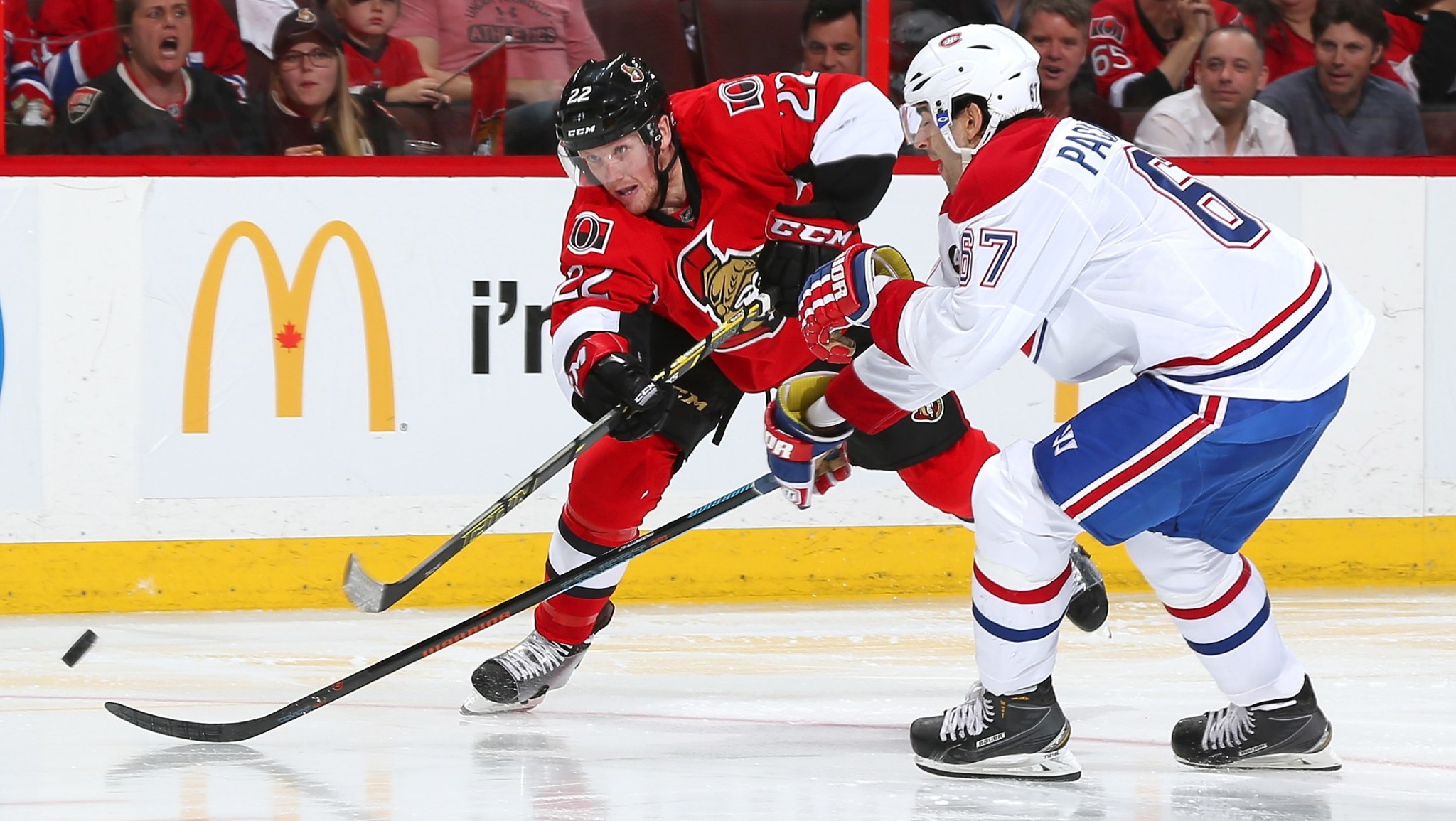 The NHL playoffs suffered their first casualty last night, as the Anaheim Ducks completed their sweep of the Winnipeg Jets with a 5-2 win. Two more are in danger of joining them on the sideline tonight, as the Predators and Canucks both trail their series 3-1.

But last night also saw our first team to avoid elimination, as the Senators earned a 1-0 Game 4 win at home to prevent a sweep at the hands of the Canadiens. Craig Anderson made 28 saves for the shutout, and Mike Hoffman scored the only goal midway through the third period, beating a screened Carey Price from the top of the faceoff circle. From there, the Senators went into lockdown mode, smothering the Canadiens so effectively that Montreal could barely get Price out for an extra attacker at the end of regulation.

That capped off a choppy, uneven and, if we’re being honest, fairly dull game. How dull? The evening’s most memorable moment probably came when the Senators took a second-period faceoff violation penalty, which was notable only because nobody could seem to remember the rule ever actually being applied before. When you’re spending the second intermission debating faceoff violations, the odds are good that you’re not watching an all-time classic.1

But that won’t matter much to the Senators, who just needed to escape with a win after falling behind 3-0 in a tight series that had featured three one-goal games, two of which ended in overtime. They’d deserved a better fate, and it would have been hard to blame them if they’d let a sense of discouragement sink in, especially after an opening two periods in which Price looked unbeatable. But after the win, coach Dave Cameron explained that that wasn’t in the team’s nature.

So the Senators are still alive. But can they stay that way? After all, only four teams in NHL history have come back from a 3-0 deficit to win a series. With Game 5 in Montreal, the odds are still stacked heavily against the Senators. Chances are, last night’s win will be remembered simply for delaying the inevitable, if it’s even remembered at all.

But there are at least a few reasons to think that this Senators team might actually be able to pull it off. Not many, granted, but I can come up with five:

Craig Anderson: Andrew Hammond was the talk of the NHL over the final two months, replacing an injured Anderson and going on a history-making hot streak to lead the Senators’ late-season charge. All of that made for a great story, but it also made it easy to forget that Anderson is a pretty accomplished goalie in his own right. And while the Senators kept riding Hammond even after Anderson was healthy enough to play, a shaky first two games of the series prompted a switch back to the veteran.

Since then, Anderson has looked great. He shut the Habs out for 54 minutes in Game 3, before allowing Dale Weise to tie the game and later win it in overtime. Last night, he was able to finish the job. He didn’t have to stand on his head to do it, but he made all the saves when they were needed and is now sitting on a .974 save percentage through two games.

A hot goaltender is the great equalizer in the NHL playoffs, and right now the Senators have one. That gives them a shot.

Room for improvement: It’s one thing to fall behind in a series despite playing your best hockey. When that happens, there’s not much to do beyond saying you brought your best and accepting your fate. But some of the Senators’ top players have yet to have much impact in the series, which could bode well for a comeback if the right guys can get hot now.

First-line center Kyle Turris has just one point through the first four games. Defenseman Erik Karlsson has three, but hasn’t yet had the sort of dominating offensive game he’s capable of (he didn’t even record a shot last night). Bobby Ryan has been ice cold for the last month.

And then there’s Mark Stone, who entered the series as one of the hottest players in the league. That ended with an injured wrist, thanks to P.K. Subban’s slash in Game 1, but Stone has still managed three points despite barely being able to shoot the puck. He’s looked better since returning to the ice, so maybe he’s a quick healer. If so, that would be good news for the Senators’ offense.

Recent history: While it’s true that only four teams have managed the feat in the NHL’s history, two of those have come fairly recently: the Flyers beating the Bruins in 2010 and the Kings coming back against the Sharks last year. That’s two in the last five years after two in more than nine decades. And it makes sense that we’d see this happening more often — after all, we’re well into the NHL’s salary cap-inspired era of parity. The days of dynasties like the Islanders or Oilers rolling through overmatched opponents are essentially gone, so maybe the history doesn’t really matter as much as it sounds like it should.

And it’s worth remembering that the Sharks and Bruins were both good teams (the Bruins won the Cup the following season). If it can happen to them, it can happen to anyone, including the Canadiens.

The comeback kids: This year’s Senators are used to facing long odds. In February, they found themselves 14 points out of a playoff spot, a massive gap from which no team in league history had ever clawed back. After you’ve pulled something like that off, winning four games in a row doesn’t sound all that tough.

So maybe this is just what this year’s Senators do. I’m not even completely convinced that a loss in this series would actually eliminate them. Don’t be shocked if they lose on Friday, then just show up in New York or Detroit or wherever in Round 2 and keep playing while we all shrug and go along with it.

Cliché power: You can’t pull off a monster comeback unless you’ve really got your cliché game working. The Senators are going to have to spend the next few days coming up with different ways to state the obvious, and that can wear you out if you don’t have a full arsenal of meaningless hockey clichés to fall back on.

Are they up to the challenge? I’d say so. As evidence, I offer this postgame beauty from Anderson, which I swear to you I have not edited in any way.

“I think it’s a matter of putting the things that happened in the past in the past. Just moving forward. It’s not over till it’s over. We’ve got to win four, and you know, that’s the ultimate goal is to get four. For us it’s one game at a time. Just keep making it hard for them. And if we keep making it hard for them, we give ourselves a chance to win. You never know at the end of the day if you just play your heart out and leave everything out on the ice.”

That right there is a thing of beauty. It’s just 30 straight seconds of stream-of-consciousness hockey nonsense, 95 words that don’t add up to mean anything at all but still sounded impressively defiant in an appropriately nonthreatening way. We should frame it and study it in postgraduate philosophy courses until the end of time. It probably took every ounce of self-control Anderson had to not finish that off by yelling “CLICHÉ BINGO” and cartwheeling out of the dressing room.

So there you have it: five reasons why the Senators could actually pull this off. But then again, maybe that’s not the right approach in the first place. This is the playoffs, after all, and nobody focuses on the positive.

So let’s flip the question around: Are the Habs going to blow this? Will they choke? Are we on the verge of a historic collapse that will haunt the franchise forever? Should their fans already be preparing for the ignominy of what’s to come, rinsing out the poutine gravy barrels for use in the great jersey-burning purge to come? Is the Canadiens’ humiliating first-round exit already inevitable?

Maybe. Probably! But just in case, let’s run down the reasons why the Canadiens could still win this thing:

They have Carey Price: Oh, right, him. The NHL’s most valuable player and best goaltender. The guy who didn’t lose four games in a row all season long. Not to mention the guy who’s been fantastic in this series so far. Is Carey Price really going to lose this series? Even if the rest of the Habs don’t show up on Friday — as in they forget there’s a game scheduled and literally don’t show up — won’t Price just sigh, make 800 saves, and then score the winning goal in overtime by going top corner from 190 feet away?

Sorry, Ottawa. We may have gotten a little carried away there. Some things really are impossible. It’s over. You’re done.

We Can Play Defense, Too: Real Madrid Bring a Katana to Atlético Madrid's Knife Fight

‘Cheap Heat’ Podcast: ‘Extreme Rules’ and the Mid-Cardization of WWE