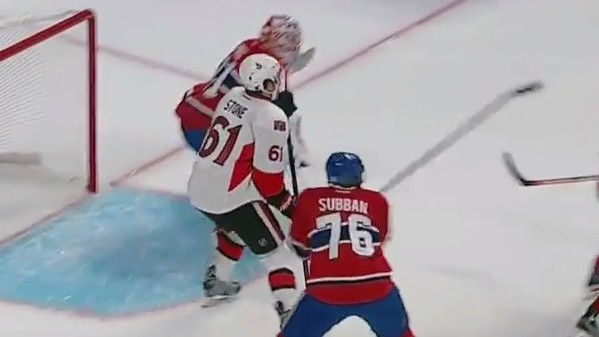 The NHL playoffs kicked off last night with four games, and we’ve already got plenty to talk about. The Predators blew a 3-0 lead against the Blackhawks, losing in double overtime on this Duncan Keith goal. The Flames earned a comeback road win in Vancouver, scoring with 30 seconds left in regulation. And the Islanders added to a good night for road teams with a 4-1 win over a surprisingly sluggish Capitals team.

And yet, out of all that, the one play that everyone seems to be talking about is The Slash. That came midway through the game between Montreal and Ottawa, and involved All-Star Habs defenseman P.K. Subban’s overhand chop to the arm of Senators wing Mark Stone.

Here’s the play in question:

Subban received a major and a game misconduct. Stone returned to action shortly after and finished the game, but the team now says he has a microfracture and could be out for the series. The Senators scored twice on the five-minute power play; the Habs added a short-handed goal.

And now, with calls for a suspension on one side and accusations of a faked injury on the other, we’ve got ourselves a mess to sort through. Here are 10 things to keep in mind as we navigate the first big controversy of this year’s playoffs.

1. That’s clearly a penalty. It’s a textbook slash, it’s intentional, and it’s to a vulnerable area of a player who isn’t expecting it. Nobody, not even the most rabid Canadiens homer, would try to claim that Subban shouldn’t have been penalized. The question is whether it should have been a major, and whether Subban should be suspended.

2. The rulebook seems clear. As pointed out by former NHL ref Kerry Fraser, the rulebook says that any slash that causes an injury is an automatic five and a game. That’s pretty cut-and-dried. Good call.

3. That’s a terrible rule. Here’s the problem: NHL referees aren’t doctors, and they don’t get to examine players after penalties. So if the NHL wants to factor injuries into penalty calls, it’s inviting all sorts of trouble. Stone certainly looked hurt; when he sprinted off, my first thought was that he probably had a broken wrist. But when he returned minutes later, Subban was furious — cameras caught him screaming at someone from the hallway between the benches. Habs fans were too.

This whole scenario illustrates the foolishness of basing penalties on injuries; if I’m an NHL player and I get slashed, apparently I should just make a dash for the dressing room and earn my team an automatic five-minute power play. And it’s why the rule, while fairly clear as written, isn’t often called that way. Players get slashed all the time, and they often look like they’re hurt in the aftermath, but ejections for slashing are relatively rare.

4. The injury may not actually have mattered. Watch the play again; referee Steve Kozari seems to point Subban to the Habs bench right away. So Stone’s reaction may not have been what sealed Subban’s fate after all.

5. Be careful with “intent to injure.” Yes, the rulebook mentions an “intent to injure” ejection when it comes to slashing, as it does with most fouls, and whenever a play like this happens, many fans will point to that phrase as justification for tossing the offender. But let’s be real: Half of everything that happens in an NHL playoff game is done with an intention to injure. And you could go a step further and argue that every slash, by definition, shows an intention to injure. Have you ever been hacked? It sure doesn’t fall under “intent to tickle.” Yelling “intent to injure” and then slamming the rulebook shut doesn’t win you this argument, unless you want to see NHL playoff games end with empty benches because everyone’s been kicked out.

6. Stone wasn’t faking. Let’s get this cleared up, since it was still lingering well after the game. Mark Stone did not fake an injury just to get Subban ejected. We know now that the team has confirmed his fracture, but we should have known it even as the game was going on.

It’s not a completely crazy accusation, mind you — hockey players do this stuff sometimes, and if you were ever going to take a dive to try to get an opponent kicked out, a star like Subban is a pretty good guy to target. But while Stone’s initial dramatics and quick return were suspicious, the fact that he missed a big chunk of the third period is the giveaway that something really was wrong. Stone is the Senators’ hottest forward; they weren’t going to sit him out in a one-goal game just to make a point. And there are plenty of ways that a hockey player can get hurt that would allow him to come back and try to play (as former pro Justin Bourne put it on Twitter, “Back playing” ain’t “not hurt.”)

Did it look good when Stone came back into the game? Maybe. Did it look worse when he was throwing punches in a postgame scrum? Sure. Did the Senators hold their best offensive weapon out of a game they were trailing just to make P.K. Subban look bad? No. Of course not. Stop it.

7. The Senators want a suspension. This kind of goes without saying, since every team that’s on the receiving end of this sort of play in the postseason always wants a suspension. Stone was pretty adamant on the topic after the game, which is what you’d expect.

But then Ottawa coach Dave Cameron took it a step further, basically threatening that he’d send a Senators player out to hurt a Canadiens star if Subban wasn’t suspended. That was … well, there’s really no other way to put this: That was really dumb. You’re allowed to be mad. You’re allowed to lobby for a suspension. But you can’t cross the line into promising payback. Cameron made it much harder for the league to suspend Subban now, since they’d look like they were buckling under a threat. And if any Senator should happen to deliver a cheap shot of their own during this series, they’ll face extra scrutiny because Cameron has set the stage for premeditation.

Cameron is a smart guy and he’s done a great job in Ottawa, but he’s also a rookie head coach in his first NHL playoff game. At his postgame press conference, he looked like one.

8. There probably won’t be a suspension. As of the time this post went online, there’d been no word from the league about a hearing for Subban. In theory that could still come, and a short suspension isn’t out of the question, but it’s highly unlikely. The league will factor in the ejection; Subban has basically served a half-game suspension already in its eyes. And perhaps most importantly, the league is always hesitant to suspend during the playoffs, and that’s especially true when a superstar is involved. It’s not unheard of — Duncan Keith got a game for this slash two years ago — but it’s rare. Add it all up, and it would be a surprise if Subban gets any additional time.

9. These are the two worst teams this could happen to. Remember yesterday’s playoff preview? My prediction for this series was “Something ridiculously controversial will happen in this series, and two hypersensitive fan bases are going to lose their freaking minds over it.” Yeah, that didn’t take long.

There’s no nice way to put this: There may not be a combination of teams in the league that are any worse suited to handle this kind of situation. Montreal fans and media are obsessed with the team’s history and status, yet weirdly predisposed to view everything through the lens of shadowy conspiracy; Senators fans and media are almost cripplingly insecure about their place in the hockey world and prone to overreact to even the tiniest controversies. That’s an awfully bad pairing for this sort of thing, and if you’re not directly rooting for one of the teams involved in this series, you may want to just check out now. It’s going to get a lot worse before it gets better.

10. Game 2 is tomorrow night. The Canadiens won last night — did we even get around to mentioning that? — and lead the series 1-0. They’ll play Game 2 tomorrow night, at least if they can squeeze it in between everyone slashing each other.