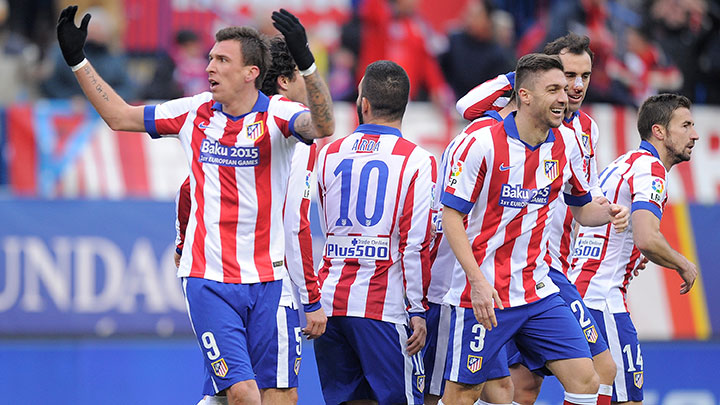 Mike L. Goodman: At this point, there doesn’t appear to be much Harry Kane can’t do. Only want to give him minutes in the Europa League? Here’s a hat trick. Want to bring him off the bench in the Premier League? Fine — he’ll rescue a win away at Aston Villa. Everybody saw what he did to Chelsea. And now, down a goal in a North London Derby, against Tottenham’s direct rivals for fourth place, Harry Kane did this:

It’s been three months since Kane started his first game — and now the only players with more goals are Diego Costa, Sergio Agüero, and Charlie Austin. Whose name is Harry Kane? Only the best English striker in the Premier League. Will Spurs — now ahead of Arsenal and a point behind Manchester United — grab the coveted fourth spot? It’s still a long shot, but if they don’t, it’ll be the first thing Harry Kane fails to accomplish this year.

The Magic of Simeone

Goodman: When Koke, Atlético’s creative hub, went off injured 10 minutes into the Madrid derby, you might’ve expected Diego Simeone’s men to struggle to do much going forward. Except “struggle” does not appear to be a part of El Cholo’s vocabulary. Without missing a beat, Simeone pulled Saúl off the bench, igniting Better Call Saul jokes across the (apparently large) AMC/La Liga cross section of the Internet, and, well, Saúl answered.

That was the second goal in a 4-0 drubbing — and such a result is becoming a habit for Simeone. In six matches between the two capital clubs this season, Real — you know, the defending champions of Europe — are still waiting for their first win. And after Saturday, it’s not looking like it’ll come any time soon. 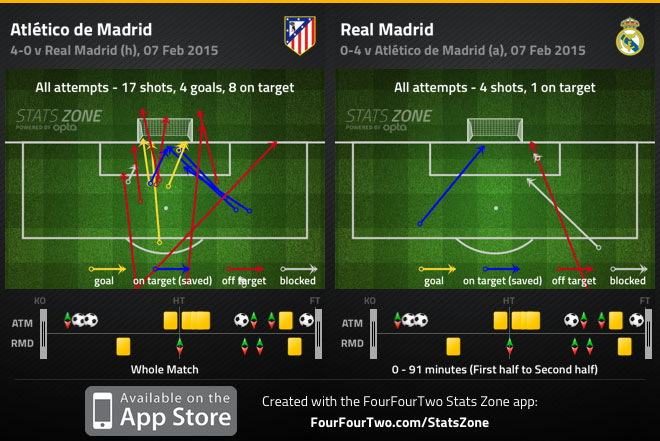 Goodman: As it stands, Southampton sit in third place with 45 points, just one ahead of fourth-place Manchester United. Southampton needed a deep-into-stoppage-time close-range blast from Sadio Mane to beat QPR, while United just barely rescued a point in the dying seconds at West Ham. Meanwhile, Tottenham’s impressive victory puts them only one point behind fourth, Arsenal, who have probably played the best of all these teams even if the results don’t show it, have 42 points, and Liverpool lurk on the fringes with 39. In short: That’s five teams within six points all competing for two Champions League places.

It was a great weekend as far as the upcoming few weeks go. Liverpool face Spurs and Southampton in the elimination gantlet that is their next two games. Saints and Spurs also alternate shots at West Ham, who, at seven points back of fourth, are as close to the Champions League as City are to the championship. With very little drama at the top of the table, this is the race to watch for the rest of the season.

Ryan O’Hanlon: If you happened to catch both of these games — the one that was supposed to be a vicious, season-defining fixture between two longtime cross-river rivals; and the one that was the continental championship between that continent’s two best teams — at our behest, please accept Grantland’s sincerest apologies. Your Paul Pogba highlight tape will arrive in five to 10 business days.

But damn were those games boring. Liverpool’s approach quickly devolved thanks to a string of injuries to Brazilian midfielders and perplexing (read: sentimental) substitutions by manager Brendan Rodgers. Everton attacked, like, once all game and managed to post the lowest Expected Goal tally (0.25) of any home team in the Premier League this season. Things got especially drab after Coutinho came off in the 56th minute, with the final half hour looking like two dudes trying to fill out a crossword puzzle with an empty pen and a never-sharpened pencil.

Over in Equatorial Guinea, Ghana and Ivory Coast managed a so-bad-it’s-almost-impressive one shot on target over 120 minutes. That game had to crown a victor, though, and the 11-round shootout, which ended after Ivorian keeper Boubacar Barry saved his Ghanaian counterpart’s attempt and then converted his own, nearly made up for everything prior. As is almost always the case with this sport, there’s a payoff to all that nothing. Just ask Didier Drogba.1

The Legend of Francis Coquelin

Goodman: How does the old saying go? You’re never as bad as you look when you get lent out to Charlton Athletic or as good as you look when you’re the linchpin of a defense that upsets Manchester City? It’s not Francis Coquelin’s fault that Arsenal didn’t beat Spurs; he wasn’t responsible for either of the goals they conceded, and he posted a respectable defensive line with eight interceptions, three successful tackles, and a couple of clearances.2

Against Tottenham, Arsenal were perfectly happy to sit and absorb pressure before counterattacking, a strategy that worked against City and seemed well suited to work against Spurs, an extremely aggressive defensive team that has frequently been opened up by lesser teams than Arsenal this season. Coquelin played his part in that approach, but the truth is, there’s only so much a single defensive midfielder can do when a team spends an hour defending deep inside its own territory.

So let’s maybe pump the brakes on Francis Coquelin, the Second Coming. Yes, he’s an upgrade over Mathieu Flamini, but that’s not saying a whole lot. The 23-year-old Frenchman is a competent defensive midfielder who gives Arsenal the option of playing more conservatively. What he doesn’t do is ensure that option will succeed. 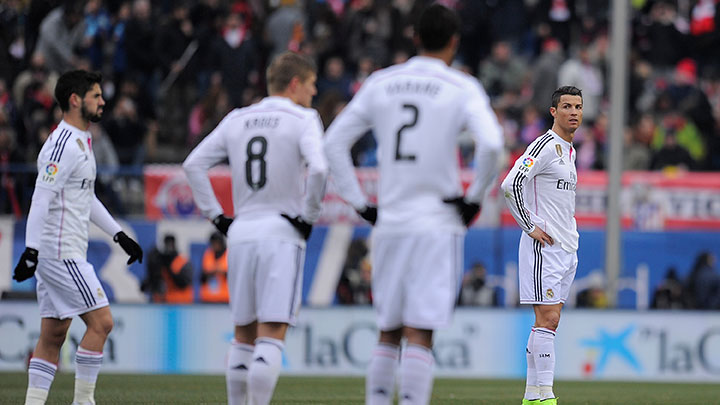 Goodman: It’s been a long time since Real Madrid looked this vulnerable. They lost their second and third games of the season — a stunning 4-2 loss to Real Sociedad in which they gave up a two-goal lead and then a 2-1 loss against Simeone’s crosstown bogeymen. The concern, at the time, was the lack of toughness and defensive balance in the midfield of Luka Modric, Toni Kroos, and James Rodríguez. All of that concern disappeared under an avalanche of 16 wins in 17 La Liga games. But after seeing their midfield kicked all over the pitch by Atlético, albeit without the injured James and Modric, those concerns have climbed back into view.

Now, a relatively strong grip on first place has weakened into a slipping finger. With Saturday’s loss, they’re just one point clear of Barcelona, whose “crisis” appears to be firmly in the rearview mirror. And don’t forget about Atlético, a Mack truck roaring from four points back in third. In a year when the top of the Premier League, Bundesliga, and Serie A seem to be all but settled, La Liga is our last hope for a title race. Lucky for us, Real, Barcelona, and Atlético seem happy to oblige.