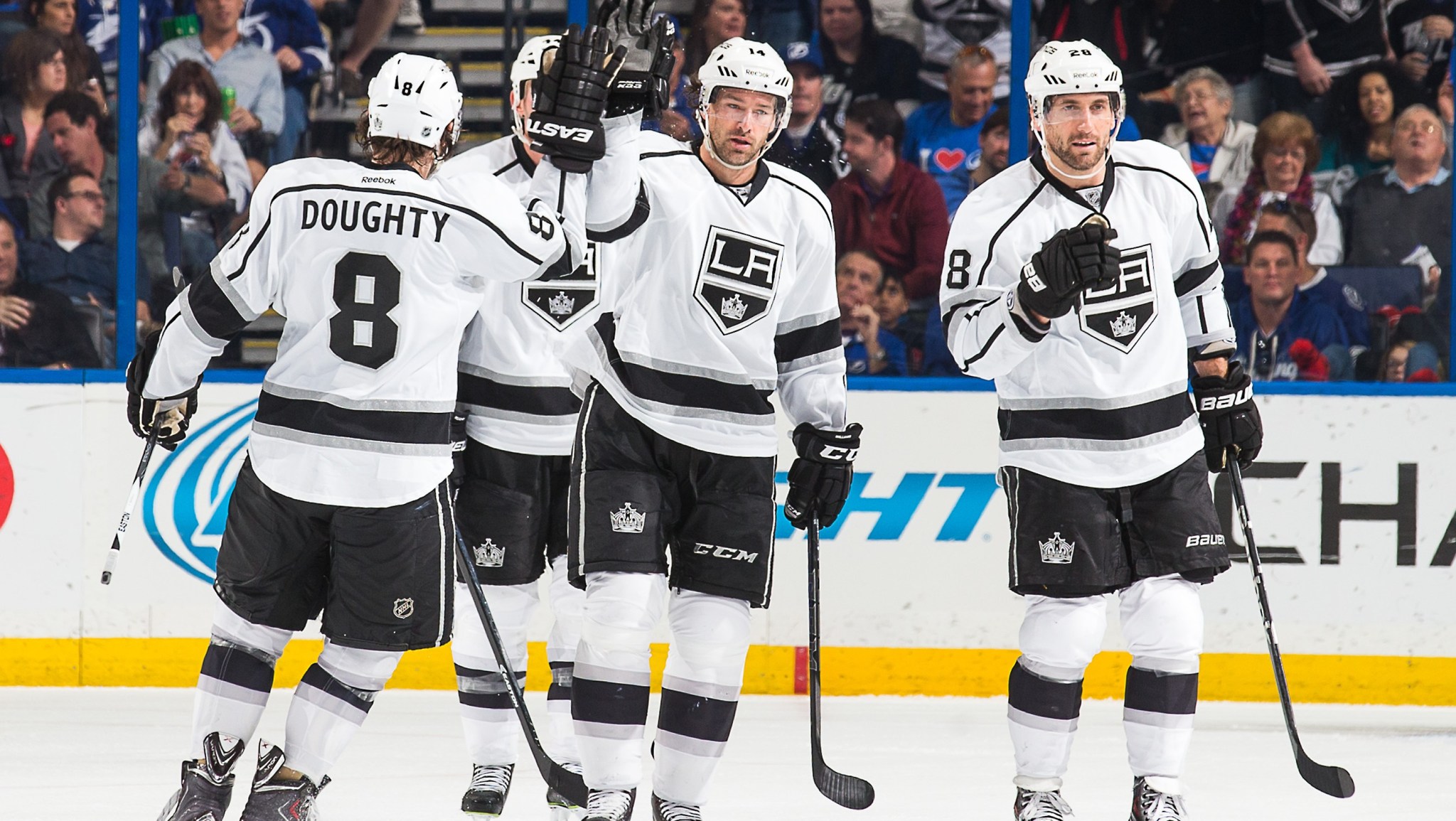 Theme of the Week: So What Do the Kings Do Now?

Hockey fans, some of them at least, have been thinking it for weeks, maybe even months. But it’s only been in the past few days that some have finally started saying it out loud: The L.A. Kings don’t look like they’re going to make the playoffs.

Even as the Kings sputtered along through most of a season spent on the outside looking in, most of us just assumed that they’d flip the switch, make a late push, and get in with room to spare. As recently as last week, this space all but brushed off the possibility that they wouldn’t make it. After all, they’re the defending Stanley Cup champions. And more importantly, they’ve done this before, sleepwalking through large chunks of the season in both 2011-12 and 2013-14, only to slip into position late and go on to win it all.

But by Saturday morning, they were sitting in 12th in the West, needing to pass four teams to earn a spot. An impressive win over the Lightning bumped them up to a three-way tie for ninth, but they’re still five points back of the wild card with 30 games to play. That’s not an impossible task, but it would take a hot streak or two coupled with a dose of good luck. And if we’re being honest, this team just hasn’t looked like a contender in any meaningful sense — at 22-18-12, they’ve lost more games than the sad-sack Blue Jackets.

So what should they do? In both 2012 and 2014, the Kings made a major midseason trade that helped turn their season around.1 With this year’s trade deadline now less than a month away, does that mean it’s time for GM Dean Lombardi to pull the trigger on another big deal in an attempt to push them over the top?

A few days ago, I threw that question out on Twitter, along with my argument that the team’s front office all but has to go out and make an aggressive move. Giving up future assets for a short-term boost is just about always the wrong move for a bubble team — they usually don’t end up helping the team make the playoffs, and even when they do, sneaking in as an eighth seed is typically just a ticket to an early exit. But the Kings aren’t a typical bubble team. They know they can win a Stanley Cup with this roster, my argument went, and that’s a window that rarely stays open very long. The Kings should be doing everything in their power to get into the playoffs this year, even it means sacrificing some of the future.

I was surprised by how many Kings fans pushed back on that idea. This year’s team is done, they told me. After a 2013-14 season that included a long playoff run coupled with several players participating in the Olympics, this year’s team can’t overcome the fatigue factor. The blue line hasn’t recovered from the loss of Willie Mitchell and the ongoing suspension of Slava Voynov. And besides, they don’t have the cap room to make a big move. Better for the team to fold their cards, maybe trade a depth veteran or two, rest up over the offseason, and then bring the core of the team back next season for a real run at another title. (Several even mentioned Connor McDavid, because in today’s NHL, everyone wants to tank.)

All of that adds up to a pretty strong argument. And yet … this is the Stanley Cup. You get only so many shots. Taking a knee on one of them, pragmatic as it may be, just seems wrong.

At this point, there’s little indication as to which way Lombardi and the Kings are leaning. But there’s a good chance we’ll find out soon. This week, the Kings will play three winnable games, against the Blue Jackets, Flames, and Capitals. If they’re ever going to gain some ground, this may be the week.

5. Tampa Bay Lightning (34-16-5, plus-36) Yesterday’s 5-3 win over Anaheim was impressive, although they really should have let the Ducks score one more late to mess up their one-goal-game mojo.

1. Nashville Predators (35-12-6, plus-33) They’ve maintained their hold on the top spot in the Central and passed the Ducks for first place overall, and now Pekka Rinne is healthy again. Look out.

Without much change to the top five aside from Detroit’s reappearance, let’s scan down the standings a little further and focus on a pair of teams that very recently looked like playoff locks but suddenly find themselves in the midst of a potential crisis.

In New York, the Rangers are still just a few weeks removed from a long hot streak that had their fans insisting that they should be considered a top Cup contender.2 But they got some devastating news this week when it was announced that goalie Henrik Lundqvist will miss a month or more with a scary-sounding throat injury.

That injury actually happened last Saturday (on a freakish play in which teammate Ryan McDonagh accidentally lifted the goalie’s mask right as the puck arrived), and Lundqvist was allowed to finish that game and start the next one. But now he’s out until March, and the Rangers may no longer be a sure thing to make the playoffs. They’re still eight points up on the ninth-place Panthers, so it would take a major collapse to put them in any serious danger. But with an unproven Cam Talbot suddenly being thrust into the spotlight, a major collapse isn’t out of the question.

And then there’s the ongoing drama in Winnipeg, where a dressing-room incident resulted in Evander Kane walking out on the team and then electing to have season-ending surgery. This whole mess has been a long time coming — Winnipeg columnist Gary Lawless has the definitive account of the whole ordeal — but the timing couldn’t be worse. The Jets had lost four straight when Kane decided to no-show their game against the Canucks; that streak grew to six before last night’s much-needed win over the Avalanche, which left the Jets with an eight-point cushion over the Kings, Stars, and Wild.

At this point, it’s hard to imagine Kane playing another game in Winnipeg. The team could look to trade him (he’s still eligible to be moved while he’s on the IR), perhaps even this season, although getting fair value will be tough now. It’s not like he was lighting it up this year, and it’s even possible that this could end up being an addition-by-subtraction situation, especially since Kane certainly didn’t seem to be popular in the Jets’ room. But the team must hope the controversy dies out quickly, because a distraction is the last thing it needs.

Two teams, two playoff races, and two players suddenly removed from the equation. And more importantly, two teams that probably banked enough points in the first half to have built up enough of a playoff cushion to survive a crisis, even one involving a major pain in the neck.

4. Carolina Hurricanes (19-26-7, minus-22) With two straight wins, they’re getting dangerously close to catching up with the rest of the East’s also-rans.

3. Arizona Coyotes (19-27-7, minus-52) Antoine Vermette is the most talked-about trade target in the league. I don’t know how we got here, but we took a wrong turn somewhere.

2. Edmonton Oilers (14-30-9, minus-57) They got blown out by the Maple Leafs on Saturday, and as per league rules were immediately relegated to the ECHL.

1. Buffalo Sabres (16-35-3, minus-92) Coach Ted Nolan is now telling his team to play better so they can be traded to a real team. You have to admire his honesty.

By the way, that 11-game Maple Leafs losing streak we just mentioned set a new mark as the longest such streak in the franchise’s nearly century-long history. Except that it didn’t, according to the NHL, because one of those games was in a shootout. That means, in the league’s logic, that this is actually a “winless” streak, which is somehow different from a losing streak, even though wins and losses are the only two possible results of an NHL game. This is, it should go without saying, completely stupid, and we’ve covered the problem before.

In semi-related news, anyone paying especially close attention to these power rankings3 may have noticed a slight change this week: We’re no long using the NHL’s goal-differential numbers. That’s because, as I learned only this week, they’re wrong, and have always been wrong. The league counts shootout wins and losses as goals for and against, which means that we have to manually take those out if we want to know how many times the puck went into the net during actual hockey games, which is what you might assume a stat called “goals differential” was measuring in the first place.

Long story short: The NHL standings are fundamentally broken and nobody cares. We’re going to look back on this a generation from now and wonder what we were thinking, and why we let them get away with doing this.

• The revived Minnesota Wild have won five straight and moved to within five points of the Flames and Canucks for a wild-card spot in the West. They face Vancouver twice in the next week, including tonight.

• Oilers winger Taylor Hall has yet to play since the All-Star break, and now he’s headed back to Edmonton for further evaluation on his ankle. With nothing left to play for other than a better draft lottery spot, you wonder when the Oilers would consider shutting him down.

• A potential late entry into this year’s tank derby: the Senators, who’ve lost three straight to drop to 26th overall and are getting frustrated. They play the Sabres, Penguins, and Hurricanes over the next week.

• Jaroslav Halak needed only eight saves to earn the win as the Islanders beat the Sabres 3-2 while holding Buffalo to just 10 shots.

• The Flyers earned a 3-1 win over the Capitals yesterday, but lost goalie Steve Mason to an injury. He appeared to hurt himself while stretching during a break in the action.

• Another odd injury situation: Sharks defenseman Marc-Edouard Vlasic is headed to the IR after missing Saturday’s game with what he told reporters was a cold.

• The Bruins remain locked in eighth place in the East after last night’s 3-1 home loss to Carey Price and the Canadiens. The Habs swept the season series, going 4-0-0.

• Speaking of Boston … a quick reminder that Bob Cole is the greatest and anyone who tries to tell you differently is a liar.

• Finally, the best news of the weekend: A recovering Gordie Howe was honored on Friday at a charity event attended by a who’s who of hockey legends. Howe suffered a serious stroke in October, but his condition has improved significantly since.