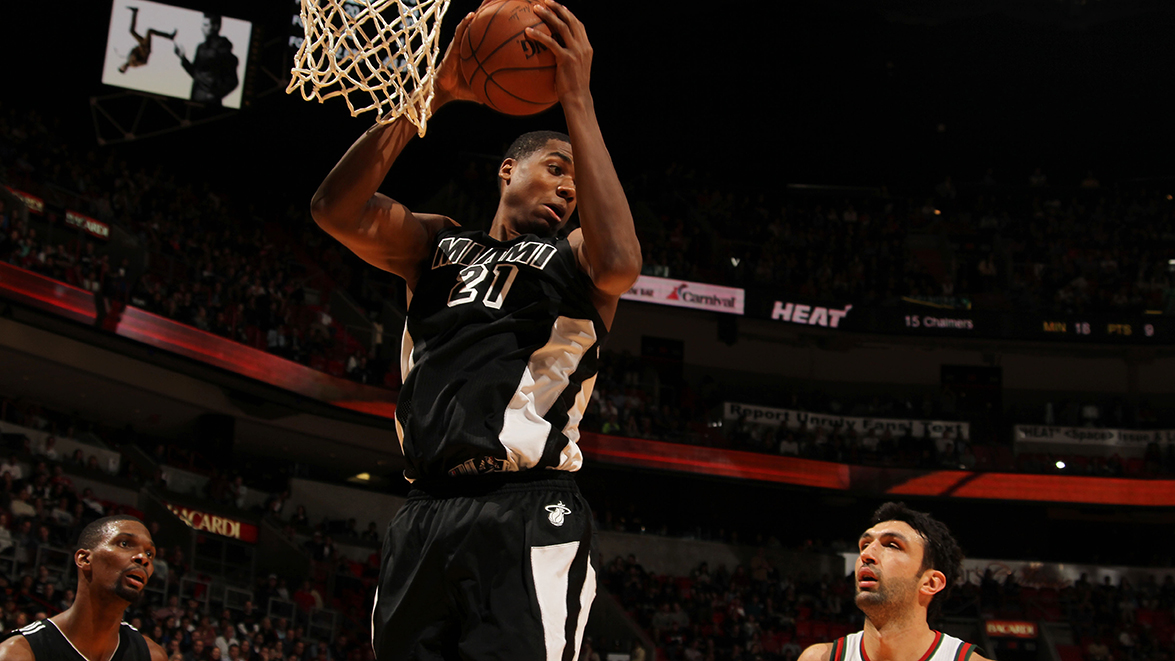 Hassan Whiteside is sitting in the lobby of a River Walk hotel in downtown San Antonio, just 14 hours after he put up 24 points and 20 rebounds in Minneapolis on Wednesday night. Sitting next to Whiteside in a hotel lobby makes you think you’re in some kind of Alice in Wonderland fever dream; his 7-foot frame makes the furniture look entirely too small. Then, as he attempts to describe what it feels like to be in the middle of the strangest and most rapid ascent the league has seen in years, he starts talking like the Mad Hatter: “Every day is a stepping-stone.”

You’re not supposed to come out of nowhere in the NBA. Player development is supposed to be a painfully gradual process. The league is full of apparatuses designed to ensure it locates, nurtures, and pays all of the world’s most worthy basketball players. There are 30 little intelligence agencies competing against each other to help make sure that guys like Whiteside, who can put up the numbers he puts up, don’t fall through the cracks. Whiteside is exceptional, and lest you think “taking the NBA by storm” is a little hyperbolic, check this out:

Highest PER Since January 1

Two years ago, Whiteside was playing in Lebanon. Now, he’s affixed atop the smart-guy leaderboard that could double as the NBA Illuminati Power Rankings.

How in the world does this happen?

There’s a temptation to believe that Whiteside represents a failure in scouting. I mean, how could every other team miss on this guy? That’s an alluring fable, but it’s not really what happened. This most unlikely of breakouts has less to do with a lack of NBA intel and more to do with a late bloomer’s personal awakening, coinciding with being in the right place at the right time.

To understand Whiteside now, it helps to know where he’s been. The Marshall product has played in the D-League in parts of four seasons, he’s played in China, and he’s played in Lebanon. Before landing in Miami, he had inglorious stints with Sacramento and Memphis. While it’s fair for the average fan to say he came out of left field, scouts and GMs have been watching him, signing him, working him out, and saying “thanks, but no thanks” for years. NBA teams don’t overlook athletically gifted 7-footers.

What’s happening right now began back in the fall, in Whiteside’s third stint in the D-League. That’s when Whiteside suddenly started putting up video-game numbers. After a cup-of-coffee stint with the Grizz, Miami signed Whiteside to a two-year deal. Talking to the big man about his new professional home in South Beach, you’re reminded that 25-year-olds think of the Miami Heat as one of the league’s most iconic brands.

“I was really excited just because … it’s the Miami Heat, and what they’ve done in the past, and the chance to become part of something special,” Whiteside says. “I’ve been watching D-Wade and Chris Bosh since I was in high school.” 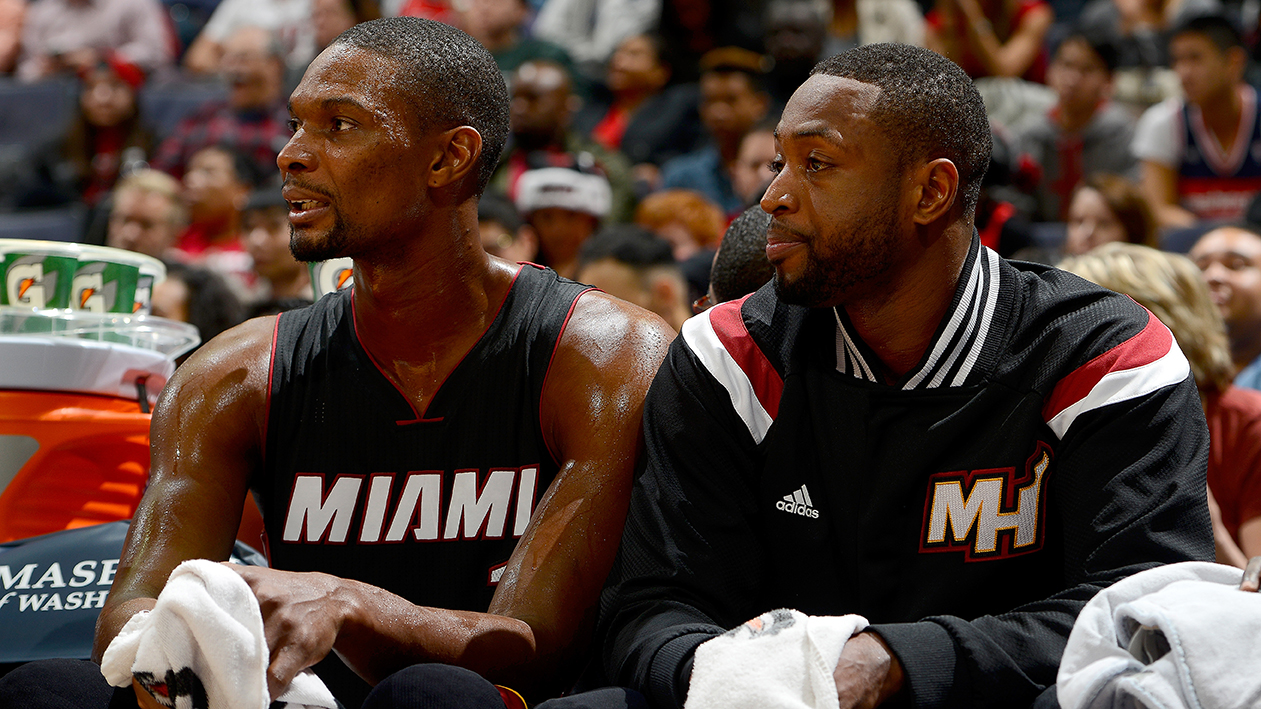 This isn’t Whiteside’s first time in Miami, and Erik Spoelstra is very quick to point out that not only has Whiteside been on the Heat’s radar for years, but they’d already brought him in for multiple tryouts.

“When we brought him in this fall, it wasn’t as if we didn’t know him, it wasn’t like, ‘Let’s introduce ourselves,’” Spoelstra says. “It was more like, ‘Hassan, good to see you again.’”

Whiteside talks about looking for his big break, but the truth is, he’s already had a few opportunities. Teams are always cycling D-League prospects through 10-day deals, but very rarely does something meaningful materialize.

Still, this fall, when Whiteside showed up in Miami, he could tell the team was serious about making this arrangement work long term. “Coach Spo told me in a meeting that, when they sign a player, they put all their chips into it and invest 110 percent in them,” Whiteside says. Whiteside would be getting a chance to play alongside Bosh and Wade while learning from Juwan Howard and Keith Smart — both of whom know a thing or two about player development.

Still, nothing is guaranteed, and the Heat have swung and missed on more than one outcast big man in recent years. Remember Greg Oden? Eddy Curry? Spoelstra recalls telling Whiteside that NBA glory could be in his future in Miami if he put his faith into the process, if he was serious about working hard and learning.

“Man to man, eyeball to eyeball, after his first workout in November, my first words were, ‘If you’re really serious about it, we can be the spot for you. But, this might not be for you. Our culture, our program, our commitment to player development, and getting you in the best shape you’ve ever been in in your whole life … there’s going to be times when you want to throw stuff at us and quit. And this might not be for you. But, if you want to commit to this, we think this is the right place for you.’”

Spoelstra believes that Whiteside is more driven this time around. The reason for that is simple: “Being forced to play overseas and in the D-League affects different guys different ways. Some players just become resigned to that fact. They just live that life. Then there’s a small percentage of players where that absolutely motivates them to make changes and do whatever is necessary to get back into the league.”

Spoelstra says he’s seen both things happen multiple times but that the resignation is much more common than the motivation.

“It can be extremely motivating for some people,” Spoelstra says, before invoking one of Heat nation’s favorite sons: “With Udonis Haslem, going from [third-team] All-American to undrafted, then having to play in Europe … he was going to make this league no matter what. I mean, one way or another he was going to find his way into the league the next year.”

Here’s the thing: Young professional basketball players are also necessarily young dudes. And many young dudes struggle with professionalism early in their twenties. This should come as news to nobody, and Spoelstra knows that a lot of guys just need a wake-up call, or five. “Hassan had to move on from Sacramento, play in Beirut1 and hear cars blow up, play in China, and get sent to the D-League a third time.”

Whiteside expresses frustration about his basketball past, especially with what he considers to be unfair reputations that marred his scouting report: “It got to a point where … ‘He’s this, he’s that,’ and a lot of people listen to that instead of finding out for themselves. They said I wasn’t willing to work. They said I wasn’t really professional.”

Regardless, the monster inside Whiteside awoke at some point in 2014, and his video-game numbers became impossible to ignore during that third D-League stint. “When I got back to the D-League, I just wanted to stay in front of the GMs.”

Still, many were turned off by his reputation. Not Miami, though. Perhaps no front office is less surprised by Whiteside’s emergence than Miami’s. He has been on its radar for years. They nearly drafted him in 2010 but took Dexter Pittman instead. And to hear Spoelstra tell it, the organization wasn’t exactly shocked Whiteside started dominating the D-League.

“We deliberated on that pick the entire night. He went the pick right after us. I vividly remember [vice-president of player personnel] Chet Kammerer standing by the board afterwards, saying, ‘We all agree on the pick, but [Whiteside] is a lottery pick, I just don’t know if he’s ready or if it’s the right fit right now.’”

A few years after that draft, Whiteside isn’t just playing like a lottery pick, he’s playing like an All-Star. Since January 1, he leads the NBA in blocks per game, ranks fourth in field goal percentage, and is ninth in rebounds per game. He’s been one of the league’s top rim protectors. In fact, any attempt to try to characterize this Whiteside insanity needs to include a list of freakish facts and figures.

Hassan Whiteside has rebounded 26.5% of total shots while on the floor. Would be 4th-highest rate ever: http://t.co/bamMtp7v3w

The Heat have to be thrilled. A down year for this proud franchise suddenly has a bright side: a huge new piece that could change the future of their team. Really productive 7-footers come along about once every few years. Despite this amazing breakout, caution still abounds and nobody is celebrating just yet. While Miami is focused on managing expectations and figuring out just what it has here, Whiteside’s short-term goal seems crazy at this point: “I just don’t want to be cut anymore.”