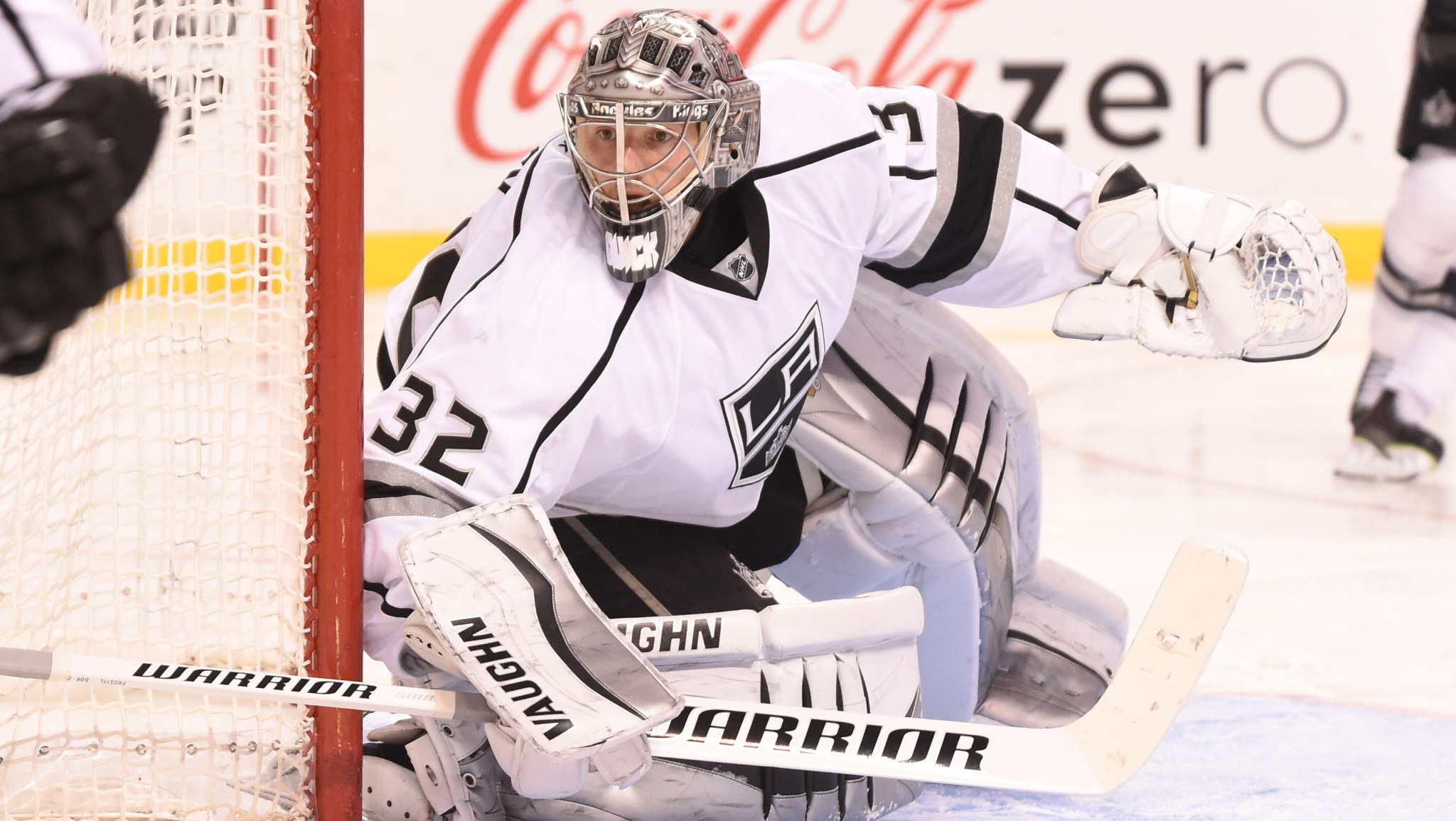 Theme of the Week: When the Playoff Bubble Pops Early

We’re into the first week of February, which would typically be the time of year to start talking about how tight the playoff races in each conference are looking, and how many teams are still on the bubble. But there’s a problem this year: That bubble is looking awfully deflated, and it’s possible we could be headed toward one of the weakest stretch runs we’ve seen in the cap era.

In the West, the outlook largely depends on how you feel about the Kings. They sit in ninth place, trailing both Calgary and Vancouver by three points and needing to catch only one of them. With all due respect to those Canadian underdog stories, everyone seems to assume the Kings will eventually wake up in time to claim a spot (since struggling through the regular season before roaring into the playoffs has basically become their trademark).

If the Kings miss out, things open up considerably. But if you feel confident about penciling in L.A., that probably leaves only one Western spot available, unless the Jets or Sharks stumble badly. You’d have the Flames and the Canucks battling for that last spot, along with the Stars and the Avalanche, who’ve clawed back into the race. The Wild nearly did, too, although they’re probably just too far back to make a run.1

The East is looking even worse. The top eight are dangerously close to being locked in already, with eighth-place Washington holding an eight-point edge on the Panthers. There’s still some hope for Florida — the Panthers have games in hand, and it’s easier to make up big ground when there aren’t a bunch of other teams between you and your target — but it’s a long shot. After the Panthers, you’re looking at teams like the Flyers, Senators, and Leafs, all of whom seem just about hopeless at this point, even if some of them don’t seem to know it yet.

A lack of down-to-the-wire playoff races wouldn’t be the end of the world; we could focus on seedings, and have extra time to get excited about specific matchups (cough). But it would be odd to go a year without the usual March and April bubble-team hype.

5. Montreal Canadiens (32-14-3, +19 goals differential) At this point, we all know what the Habs are: a good-but-not-great team being dragged into contention by Hart-caliber goaltending from Carey Price. Is that enough to make them one of the five best teams in the league right now? I kind of think it might be.

4. Tampa Bay Lightning (32-15-4, +33) They play the Blues, Kings, and Ducks this week, followed by a game against the Predators. So, yeah, we’ll know a lot more about this team in roughly nine days.

2. Nashville Predators (32-11-6, +34) The (temporary) post–Pekka Rinne era has been going … OK. They’ve lost four of six, and Carter Hutton hadn’t looked great until yesterday’s shutout in Pittsburgh. But they’re still in first place in the Central, and with Rinne skating again two weeks into what was supposed to be a three-to-five week injury, a return may be getting close.

You may notice an absence from this week’s list: the Blackhawks, who didn’t make the cut for the first time since mid-November. They spent most of that time sitting in our no. 1 spot, so having them drop all the way out of the top five seems like a big deal.

I’m not actually sure it is, though. While the three or four worst teams in the league are pulling away from the pack, the top of the league remains all bunched up. There are probably nine teams that could make a strong claim to top-five status — the Islanders, Red Wings, and Penguins are also in the mix — and not all that many clear ways to choose among them. With that kind of traffic jam forming, it doesn’t take much to drop a team just outside the fifth spot.

In Chicago’s case, the Blackhawks are coming off a week in which they took the dreaded three-game California road trip and came out with just two points. Those came in an impressive 4-1 win over the Ducks on Friday, and Wednesday’s 4-3 loss to the Kings featured a late blown lead in what absolutely felt like a playoff game, so it’s not like the Hawks played poorly. They were good. Just not “slam-dunk Cup contender” good.

And that’s been a theme for this team for a while now. Chicago hasn’t won more than two games in a row since snapping an eight-game streak in early December. It hasn’t lost more than two in a row either, so again, the Blackhawks are not playing poorly. They just don’t seem to be finding that next level, and that’s been enough to crack open the door for other teams to take their spot.

5. Toronto Maple Leafs (22-25-4, minus-12) The Leafs have certainly earned this spot, thanks to a 1-11-1 January in which they’ve forgotten how to score. But let’s be clear: They won’t stay here. With their playoff chances finished and the draft lottery all that matters, every Leafs fan already knows the six-game win streak is coming.

4. Carolina Hurricanes (17-26-6, minus-24) They’d had points in four straight before losing to the Rangers on Saturday. In this section, that qualifies as a hot streak.

3. Arizona Coyotes (18-26-6, minus-54) The Coyotes sure sound like a team that’s ready to start selling, and is willing to entertain offers on just about anyone.

2. Edmonton Oilers (13-28-9, minus-51) They beat the Sabres in Friday’s Tanker Bowl. Then they collapsed in the third against the Flames on Saturday. That all sounds about right.

Think about that: zero points for an entire month. In a league that gives out points for losing, that sort of futility should really be impossible. And it’s renewed talk of — and in a certain weird sense, admiration for — the Sabres’ efforts to tank the season.

Tanking is always a sensitive subject, but it’s been unavoidable this year, thanks to Connor McDavid, Jack Eichel, and a league that didn’t have the common sense to tweak the draft lottery to avoid all of this. The Sabres aren’t the only team to be labeled a tanker this year — the Oilers have heard the talk, too, recently, and neither team is happy about it.2 The Sabres deny all charges, and Oilers goalie Ben Scrivens even went as far as threatening to fight anyone who suggested the players weren’t trying. That’s led to another round of arguing over what exactly “tanking” means, where rebuilding ends and tanking begins, and whether it’s a term that should apply to the players themselves.

We’ve covered this before, but once more, with feeling: Players and coaches don’t tank. No reasonable person thinks that any NHL player wants to lose. And nobody could reasonably believe that someone like Buffalo coach Ted Nolan, who’s going to be fired long before the Sabres are competitive again, is having any part of this grand plan either.

No, the Sabres are trying their best. It’s just that their best is terrible, because they’re a terrible team. And they’re a terrible team because, presumably, they were designed that way. That’s what tanking means: assembling a team that has just enough talent to create some vague sense of plausible deniability (and to reach the salary floor), while punting the season in an attempt to secure a high draft pick. That’s a front-office decision. It’s what the Sabres stand accused of, and it’s a charge that any fan with any common sense has already convicted them on.

This awful Sabres team was built by general manager Tim Murray, one of the most highly regarded hockey minds in the game. He’s either executing a plan, or he really is trying to win and is therefore one of the worst GMs the league has ever seen. Nobody thinks it’s the latter. Players don’t tank, but organizations do, and right now the Sabres are doing it about as well as anyone we’ve ever seen.

• The Bruins and Kings went into the season looking like a potential Stanley Cup final matchup. It hasn’t worked out that way through the first half, but the two teams hooked up for a great game on Saturday. The Bruins took a 3-1 decision.

• Alexander Ovechkin hit the 30-goal mark in yesterday’s 4-3 loss to the Blues. He becomes just the fifth player in history to score 30 in each of his first 10 seasons.

• The Predators’ 4-0 win over the Penguins was also James Neal’s first game back in Pittsburgh since the offseason trade that sent him to Nashville. He was held off the scoreboard.

• The Lightning have waived struggling backup Evgeni Nabokov. That probably spells the end of the line for 39-year-old former All-Star.

• The Sharks had an impressive week, beating the Kings, Ducks, and Hawks at home. They get the Oilers tonight, which sounds like an automatic two points until you remember that this year’s Sharks have a weird habit of losing to bad teams.

• The Flyers’ 1-0 win over the Leafs was their fourth straight, and they’ve climbed up to fifth in the Metro. They get a few days off before facing two of the teams ahead of them, the Islanders and Capitals, later this week.

• The Rangers got a scare on Saturday when Henrik Lundqvist took a puck to the throat. It was an ugly-looking play, but he was able to stay in the game.