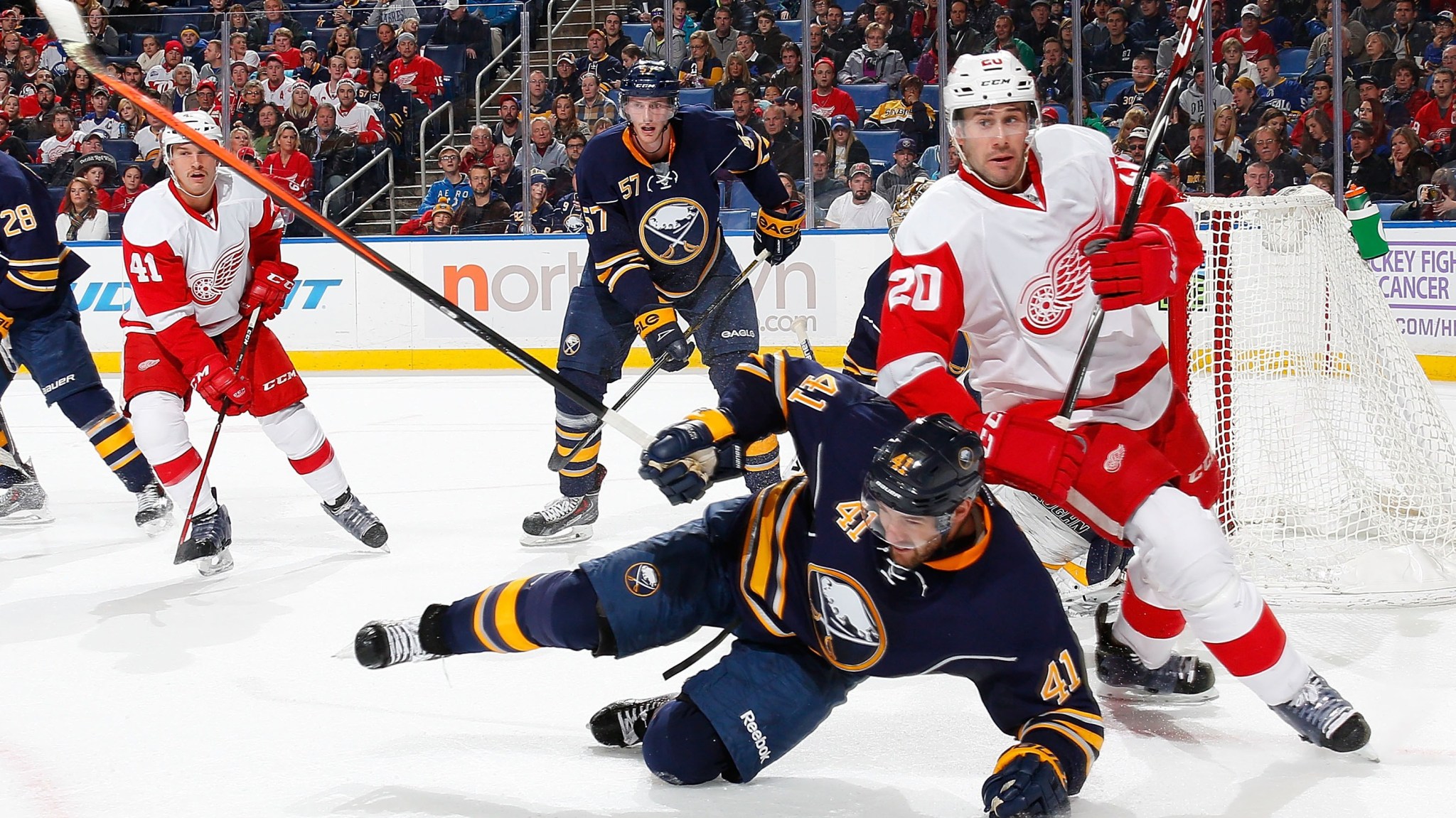 The third star: The Los Angeles Kinds
You know, they always did strike me as nice guys.

But there’s a problem: They’re not realistic, because they involve Messier having pleasant interactions with Vancouver fans. Thankfully, a Canucks blog has taken the time to re-create the ads as they should have been.

GIF What just happened to Hiller? I can't stop laughing. if you need a good laugh, I recommend this http://t.co/8t7AoBcqCz cc @mckennaconor

I think my favorite part is the defenseman who has to act like he didn’t just see that.

This Week’s One Star of Awesome

Recognizing the one NHL personality from around the league who wins everything.

The first star: This Bruins fan
This kid is the greatest.

The issue: In an upcoming draft that features two can’t-miss franchise players, teams like the Sabres sure seem to be tanking their seasons for a better shot at the top pick.

The outrage: Tanking is unethical, hurts the league’s competitive balance, and is just plain embarrassing.

Is it justified? No, because NHL teams would never do such a thing. That’s the league’s position, at least.

Which is ridiculous, of course, as anyone with any common sense can see, but it’s what the league has to say. The rest of us don’t have to play the PR game, so yes, of course the Sabres are tanking. They’re not even being subtle about it.

First, let’s be clear: Players don’t tank. Nobody’s going to go out there and lie down so some kid can come in next year and take your job. And for the most part, coaches don’t tank either, because they know they might get fired before the new savior shows up. The guys down at ice level do the best they can with what they’ve been given.

But sometimes they’re not given much of anything, because front offices do tank, and they’re usually pretty obvious about it. Are the Sabres really doing everything they can to ice the best possible roster this season? Of course not. They’re rebuilding, which at this point that means they’re fine with finishing dead last.

And that’s the problem, and it’s why some of this outrage is misplaced. What the Sabres are doing is embarrassing. It’s also smart. Under the rules the league has set out, the Sabres are doing what they need to do. We shouldn’t be made at Tim Murray. We should be mad at Gary Bettman for not fixing this system.

Thirty years ago, it made sense to help the bottom-feeders. There were huge disparities between franchises in terms of their chances for future success. Making sure a guy like Mario Lemieux went to a struggling team was a way to save that franchise. But today we have a salary cap, revenue sharing, and more parity than ever before. We shouldn’t be rewarding abject failure anymore. And we shouldn’t be training fans to hope their team loses. The only good reason to continue handing the top picks to the worst teams is because that’s how we’ve always done it, which is no reason at all.

A weighted draft lottery isn’t enough. There are better systems out there, like this one or this one. It’s time the league had the guts to use one. Until it does, don’t blame teams like the Sabres for tanking. Just don’t be afraid to call it what it is.

I hear you American folks had an election this week. I didn’t vote, partly because I’m Canadian but mostly because my faith in democracy was shattered years ago by this week’s obscure player: journeyman defenseman Rory Fitzpatrick.

Fitzpatrick bounced back and forth between the AHL and NHL over the course of his 15-year career, doing short stints with various teams before eventually settling in as a semi-regular for a few years in Buffalo beginning in 2002. All told, he played 287 career NHL games for six different teams.

He was also elected to the All-Star team in 2007, because somebody thought it would be funny. And then he was jobbed out of that honor by the NHL, because the league did not think it was funny.

The grassroots “Vote for Rory” campaign was one of those fun Internet things that used spring up in the days before corporations got social media teams and ruined everything. And it was going to work. Fitzpatrick was going to earn enough write-in votes to start for the Western Conference. That’s when the league realized that hockey fans were actually enjoying themselves and stepped in to stop it, blatantly rigging the final vote tally to keep Fitzpatrick at home.

Fitzpatrick played his last NHL game just one year later before leaving the league due to a broken heart. Also, because he wasn’t very good. And nobody has cared about voting for anything ever since.

This week’s most depressing CapGeek page belongs to Cam Ward, because I’m getting a little tired of Hurricanes fans having everything go their way this year.

Ward makes $6.7 million this year and has a cap hit of $6.3 million until 2016. That’s unfortunate, because he’s the Hurricanes’ backup goalie, and also he is terrible.

Well, maybe he’s not terrible — he’s probably a good guy. But his numbers are terrible this year, just like they were last year. They weren’t much better the year before that. In fact, you have to go back to 2011 to find a season when he even received a Vezina vote. He finished seventh that year, the best he’s ever managed during his career. This is his 10th season, and he’s finished with a top-10 save percentage once. He’s just not all that good.

And yet he’s one of the highest-paid goaltenders in the league, for two reasons. One, he had a few years where he posted decent win totals because he played a ton of games. And two, he had one good playoff run. That was all the way back in 2006, when he was a 22-year-old rookie, but he helped the Hurricanes win a Stanley Cup, and a ring earns a goaltender permanent “elite” status the same way a green jacket gets you a lifetime pass to the Masters.

The amazing thing about Ward’s current deal is that he signed it in 2009, three full years after his Cup run and well after he’d established himself as a league average starter. And yet the Hurricanes still felt the need to give him a deal that to this day carries a top-five cap hit. It’s madness.

Stop overvaluing Cup rings, everybody. Even for goalies. It’s a great way to end up wasting millions of dollars on a guy who may not be much better than average.

(Why, no, Penguins fans, I have no idea why everyone is staring at you right now.)

Last week we broke down a series of Mario Lemieux commercials in which he awkwardly endorsed various products before stealing children. They were pretty bad. Obviously, Mario is the worst commercial actor in hockey history.

Not so fast, said Wayne Gretzky fans, many of whom contacted me to demand equal time. And so this week, we’re going to have a look at one of Gretzky’s ads from the early ’80s. Mario has set the bar high — can the Great One reach it?

• So this is Wayne Gretzky in an ad for 7Up that costars his younger brother Keith. We join the action just as Wayne is finishing an intense workout of bench-pressing roughly 30 pounds. His kid brother cracks opens a bottle, and now it’s time for Wayne to show off his acting chops.

• Come on, Wayne, hit us with some of that patented Gretzky intensity!

• Little too intense there, Wayne.

• “At last … ” Uh, Wayne, you did seven reps. I’m assuming this ad is going to end with Dave Semenko coming in and finishing the workout for him.

• By the way, this is Keith Gretzky, the brother who was drafted but never made the NHL; not Brent, the brother who played 13 career games for the Lightning and is responsible for the most unnecessary search disambiguation page ever created.

• Also, Keith inherited all of the family charisma.

• I guess we should be too surprised that Wayne’s struggling here. Remember, he was the only athlete from the famous “Bo Knows” ad that couldn’t be trusted to string three words together. And that was after he’d been in L.A. for a few years. For this ad, we’re probably lucky he did anything beyond pointing at the 7Up bottle and grunting.

At least 7Up gave Wayne some talent to work with here. The company wasn’t always so kind. Here’s an ad from 1980 featuring Wayne Gretzky and … uh … about that …

• A few weeks ago, I got invited to join a fantasy hockey league. When I showed up for the draft, I realized it was an auction format, which I’d never done before. I got a little caught up and spent my entire budget on the first good player I saw. What I’m trying to say is that I think I understand what happened to the casting director here.

• I like how that one shot makes it seem as if Michel “Bunny” Larocque has absolutely no idea where the puck is. From what I remember of his career, that was probably accurate.

• Morris Lukowich has to be the only player ever to take a high stick in the ear during a soft drink commercial.

• Wayne Gretzky, once again, going a little too intense on the whole “turn to the camera” thing. And why is he yelling at his mom?

OK, this is a tough call. Mario’s passive-aggressive kidnapping spree versus Wayne’s ultra-intense soda peddling. It’s not easy, but I’m going to have to award the title of “Most Awkward Acting in a Commercial by a Hockey Player” to Wayne Gretzky. Congratulations, Wayne, come on down to accept your …

Wait, I’m told Mario Lemieux has one more ad he’d like to enter into evidence. And he’s brought some costars of his own …

• Yeah, Mario is the king. When you can play the Bea Arthur card, you’re on another level. We’re sorry we ever doubted you.

By the way, none of those children were ever seen again.

Have a question for Sean? Want to suggest an obscure player or a classic YouTube clip? Send al lyour grab bag-related emails to nhlgrabbag@gmail.com.

A Magical Butt Goal and the Redemption of Rick Nash