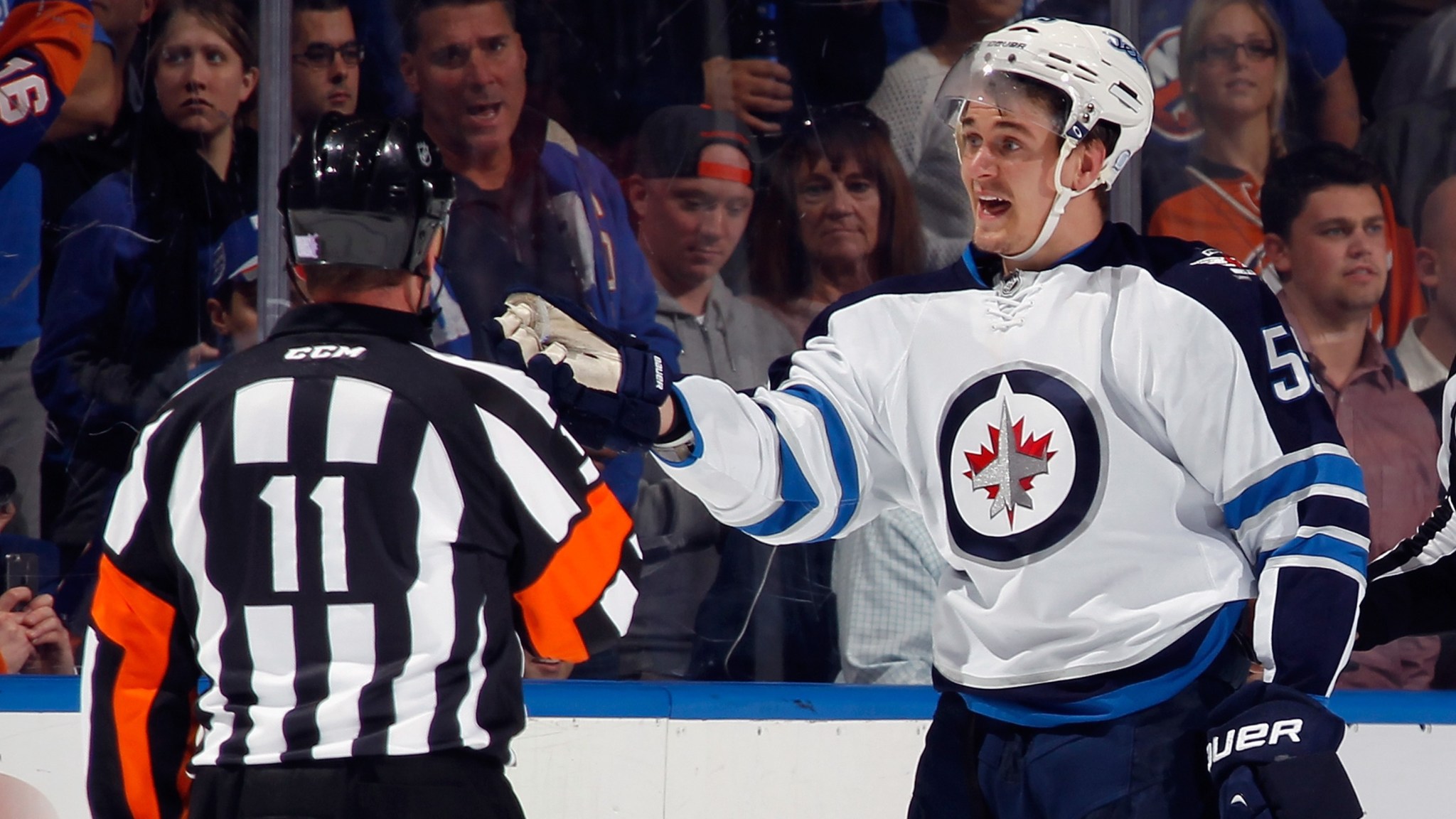 The third star: Will Arnett coaches the Leafs
It’s a solid effort, although maybe the team should hold off on that whole “three centers” plan until they finally manage to get the hang of “one center.” Also, why is some dude’s studio apartment right next to the Leafs’ dressing room?

The second star: the Boston Bruins
The judging panel has spoken, and the Bruins win this year’s coveted “Best Halloween Costumes” award. (The judging panel consists of my 7-year-old daughter.)

It’s appropriate to see a Boston Bruin dressed as Olaf, since at this rate neither one will make it very far into spring.

The first star: Brayden Schenn and Drew Doughty
I’ve watched this on a nonstop loop for the past hour and I laugh every time.

Today is Halloween, so it’s only natural that we go with one of the most terrifying players in hockey history, an evil, undead monster who shuffled through a 12-year career while feasting on the brains of the living: Rick Zombie.

Wait, no, I’m sorry, that was Rick Zombo, a hard-nosed blueliner who spent six full seasons with the Red Wings before finishing his career with the Blues and Bruins. In addition to having a cool name, he was a classic defensive defenseman who never scored more than five goals in a season but could be counted on to take on a team’s tough minutes. He retired after the 1996-97 season and went on to pursue a coaching career.

He didn’t eat anybody’s brains and he probably wasn’t evil, although he did once get suspended for slashing a linesman. He also apparently once wrote a coloring book. Also, I’m pretty sure he wasn’t actually undead. But if he was, this was definitely the play where it happened.

In which I complain about things that matter probably only to me.

The Maple Leafs looked awful in a 4-1 home loss to the Bruins on Saturday, and after the game they held the classic staple of the struggling team: a closed-door player’s meeting.

The closed-door meeting is almost as old as sports itself. But here’s my question: Do we really need the “closed-door” part of that expression? Isn’t it kind of implied at this point? I’ve never heard of a locker room full of frustrated players deciding to hold an impromptu meeting after a tough loss and found myself wondering if it would be OK if I just wandered in and sat down.

Don’t get me wrong, I’d love to see that postgame report. “Yes, Biff, after yet another disappointing effort, the players are currently holding an open-door meeting. That’s right, Biff, open-door. We’re all just leaning into the doorway right now, staring at them. They’re really mad.”

Then again, maybe we shouldn’t make any assumptions. After all, these are the Maple Leafs — they can’t lock down anything.

In which I take credit for fixing things that mattered probably only to me.

For some reason, the (Department of Player Safety suspension) tweets never include the actual suspension length … Presumably that’s because the NHL wants you to watch the entire explanation before hearing the decision. But the practical effect is that, if you’re a hockey fan, your Twitter feed immediately fills up with every reporter, blogger, and random fan “breaking” the news of the suspension’s actual length. It’s just a steady stream of manual retweets with “five games” (or whatever) slapped on each and every one.

Save us, whoever it is that runs @NHLPlayerSafety! Start putting the suspension length in the original tweet, and spare us all the flood of breathless scoops.

From earlier this week, a ray of hope:

And then, the confirmation:

By popular demand DoPS will now include game numbers in our tweets. Please watch the videos for the explanations anyway.

WE DID IT! WE DID IT, EVERYONE! WE FINALLY GOT THE NHL TO CHANGE SOMETHING!

“Never doubt that a small group of thoughtful, committed citizens can change the world; indeed, it’s the only thing that ever has.”
—Margaret Mead, just now, talking about Grab Bag readers

Now, about those referee microphones …

This week, Don Cherry did a seven-minute Coach’s Corner in which he didn’t say one single word about hockey.

We knew it was coming. Cherry will occasionally spend some of his segment honoring fallen soldiers or first responders. Most people appreciate it, while others feel like it can tread dangerously close to feeling manipulative. After one of the toughest weeks in recent Canadian history, we were all wondering how Cherry would address the events, and whether he’d be able to do the moment justice without crossing over into an unnecessary controversy.

For the first four minutes, he was great. And then came the transition. “Having said all that, I have to say something,” Cherry said at around the 4:05 mark. “And maybe you people will get upset at that, and maybe somebody will say you shouldn’t do this.”

And I’m pretty sure every single Canadian thought Oh no, here we go. Hell, even Ron MacLean started to make his classic “I may need to jump in here and wrestle Don to the ground” face.

And then … Cherry went in an unexpected direction. And he nailed it. I’ll leave it to you to watch the clip and see what he said, but he did an absolutely masterful job for the segment’s last three minutes. It may have been the best Don Cherry moment in years.

Cherry will be back to hockey this weekend, and the hockey world will be back to complaining about everything he said. But for one night, he was fantastic. Thumbs-up, eh.

Thirty years ago this week, Pittsburgh Penguins fans had the opportunity to acquire a once-in-a-lifetime keepsake when the game against the Canadiens on October 27, 1984, was designated as Poster Growth Chart Night. And it was promoted in this oddly unsettling ad featuring rookie superstar Mario Lemieux and a terrified child.

• This is actually a pretty cool product. When I was a kid, I would have loved to have one of these things hanging in my room. What I would not have loved would be to have the real Mario Lemieux suddenly appear and lift me up in the most excruciatingly awkward way possible. I guess you take the good with the bad.

• Seriously, that glove coming in and grabbing the kid is one of the most horrifying moments ever televised. The kid really sells it too. Some strong performances all around.

• You can just picture the director here yelling, “Slower! Slower! Do everything ridiculously slowly!”

• Why is Mario wearing a helmet? Is it in case the kid tries to brain him with that ruler and make his escape? Because if so, that’s actually some pretty good foresight.

• “So, the commercial is 30 seconds long. How much music should we compose?” “Four seconds is more than enough, right?” “Yeah, just play that on a loop. Nobody will mind.”

• That kid’s elbow is too shiny. It just is. No, I didn’t think I’d be body-shaming a small child today, either, but here we are.

• The creepy smile at the end really sells it. I’m going to get a Penguins jersey and a bright yellow helmet and go as this ad for Halloween, just to see how fast the neighborhood children sprint away from me.

Oh well. The ad was a disaster, but you have to remember that Lemieux was only 19 when they shot it. I’m sure he got more comfortable in front of the camera as he got older, so it’s really no … oh, wait, I’m told we have another Lemieux commercial from a few months later.

• OK, right off the bat, that’s a huge jerk move, right? Some little kid is trying to practice his wrist shot, and Mr. Superstar skates in and just steals the puck from him. Yeah, you’re better than me, Mario. I’m 6 years old over here, how about you let me get in a few more reps before you start big-leaguing me on camera?

• By the way, how have Penguin fans not taken that “Let me show you how I do it” sound bite and edited it into every Mario Lemieux highlight reel video? The Ray Bourque clips alone would be priceless. Somebody get on this.

• Mario has worked his way up to some actual dialogue in this ad, and he pulls it off pretty well, as long as you don’t notice that he looks exactly like Haley Joel Osment, which I guess I kind of ruined for you now.

• Now a crowd of fans is cheering Lemieux as he walks by, presumably because they’re impressed with his ability to just abandon his car in the middle of the street.

• And now he’s taking the kid for a ride. Look, Mario, you can’t just keep taking people’s children. That is not how commercials work. You are not the Angelina Jolie of the advertising world. Let these poor kids go back to their families.

Oh well. At least Mario was never again asked to do a low-budget ad for … nope, I’m told we have one more.

• I mean … there’s really no way around this: Those are the kids from the first two commercials, right? That’s definitely Toy Car and Shiny Elbow. Mario never let them go home. He just adopted them, and then forced them to enlist into his army of full-time child caddies. I don’t think there’s any other reasonable interpretation. Let the children go, Mario! #FreeShinyElbow

Thus concludes this week’s edition of “Why Hockey Players Never Get Endorsement Deals.”