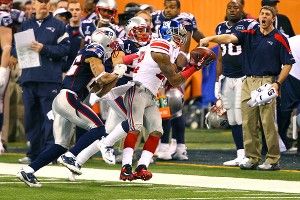 1. Mario Manningham, Hands
At the risk of ostracizing myself from my employer and my hometown, I am giving this week’s Rankonia scepter to Mario Manningham. I can’t believe I am about to write these two words about a New York Football Giant: Nice. Catch.

2. Eli Manning, Better Than You Thought
Here, friends, is Sarah Larimer, president of the Eli Manning Fan Club: “Look, I took a lot of shit for being pro-Eli earlier this season, and NOW LOOK WHO IS RIGHT, DUDES OF GRANTLAND/AMERICA. This girl.

“Seriously, it’s enough to make you forget all about this. Well, almost.”

3. Jeremy Lin, Point Guard, Concrete Jungle Where Dreams Are Made
Jay Kang nominates the man who is going to turn Toney Douglas into a plumber. In a week during which New York’s football team won the Super Bowl, Lin is somehow New York’s most beloved athlete. Go figure. Also? Greatest nickname generator in pro sports.

4. Clint Eastwood, Car Salesman
Mark Lisanti, who may or may not own Every Which Way But Loose on Blu-ray, nominates this lion of American cinema and automobile hustler: “It’s halftime in America, bitches, and if you’re not ready for the second half, Dirty Harry is going to shoot you in the face.”

7. The Anfield Cat
Both Bill Barnwell and Brian Phillips nominate the cat that ran on the pitch during Liverpool’s 0-0 draw with Tottenham. There’s some debate about the cat’s name. One man claims the cat goes by “Kenny” and is a local Liverpool stray, “wayward offspring of Pako.” (God bless British newspapers.) Another Liverpudlian suggests the cat’s name is “Socks.” Apparently, “there ain’t much to say about Socks. He is a cat who has been around Anfield for a while now.” Whatever his name is, he has a Twitter account.

8. Gisele, Ride-or-Die Chick
So, Wes Welker is probably not coming over for postseason caipirinhas then.

9. Kevin Love, Kick-Puncher
Rafe Bartholomew nominates this bearded beast of the north, who used Luis Scola’s face as a shoehorn this past Saturday.

Rafe actually wanted to give Love some kind of negative ranking and compare him to Christian Laettner. (Seeing as how Rafe is not Shane Ryan, I’m assuming this would be an unflattering comparison.) But then Chuck Klosterman chimed in with this: “I don’t know. I think Love’s apology was weirdly ‘complete.’ He basically apologized to everyone except the Sandinistas.”

10. Marcus Denmon, True Tiger
Sarah Larimer has a lot of Missouri pride. I’m just going to get out of her way here: “Marcus Denmon had 29 points (29!) and nine rebounds to lead the no. 4 Missouri Tigers past the Kansas Jayhawks on Saturday, in what was the biggest Mizzou game of the season/decade/my life. (Possible exaggeration.) This was a Border Showdown game, and it might have been the last time these two teams met in Columbia. EVER.

“Anyway, the thing is, Mizzou totally almost lost until Denmon caught fire in the final two minutes of the game and Mizzou went on to beat the Jayhawks, 74-71. KABOOM, right?! Hooray, Mizzou! I’m starting to forget about Quin Snyder! (Not really.) Booches for everyone!”