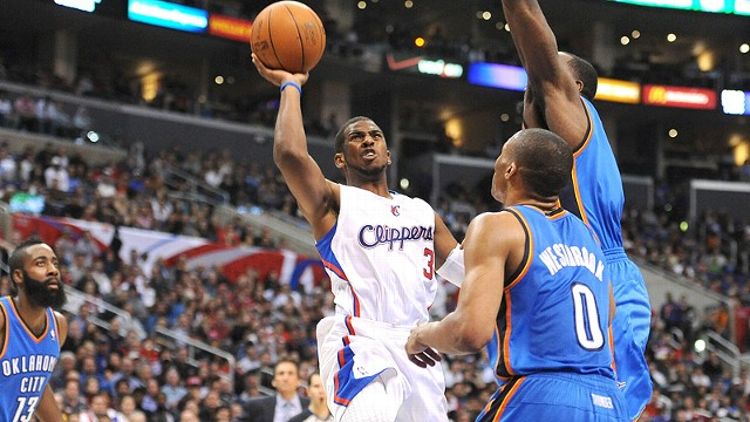 1. Chris Paul, Guillotine Operator
Yes, Blake got the hosannas, headlines, hallelujahs, and holy shits. Yes, Blake the Destroyer killed everything with The Dunk on Monday night. But if the ringing in your ears subsided in time, you might have noticed Chris Paul playing a solo version of the executioner’s song against Oklahoma City in the fourth quarter. When Daequan Cook and Kevin Durant decided to start long-range bombing the Thunder back into contention late in the contest, Paul found a gear that I believe is called “Step on Your Throat.” Eyewitness Robert Mays had this to say: “Surgical shit. In person you see how easy it all is for him.”

2. Dallas Braden, Celebrity Skin
It might be a fake tat, but it is a glorious fake tat. Temporary or not, the Oakland A’s hurler got Rollie Fingers riding a dolphin through a rainbow on his bicep. The image may fade, but the memory lasts forever. Via State Property treasurer Andy Greenwald: “I kind of wish Jonathan Papelbon would get a tattoo of Juan Samuel eating a cheesesteak or something.”

(As has always been the case with Kane, you’ll be friends/he’ll call you again/he’ll chase you around every bar you attend.)

4. Bruno-Zita Mbanangoye, Hometown Hero
But really the whole Gabon vs. Morocco Africa Cup of Nations clash. Gabon, the co-host of the tournament, was down, 0-1, at the half. Then they scored two to go ahead, to the delight of the home crowd, only to be pulled back in the 89th when Morocco scored a penalty. Then, in stoppage time, Bruno-Zita steps up and nails a free kick from outside the box to send 40,000 fans into a state of pandemonium. It wasn’t that decent of a hit, but what scenes. Check the highlights:

8. Dajuan Wagner, Camden’s Own
They used to call this Camden, New Jersey, basketball-legend-in-the-making “The Messiah.” So it would only be fitting (and incredible, and incredibly heartwarming) if the one-time Memphis Tiger and Cleveland Cav actually returned to a career ruined by illness. If you don’t know, now you know:

9. DGB, BMOC
Another nomination from our patron saint of the Midwest, Sarah Larimer: “Dorial Green-Beckham! Welcome to Missouri! So happy to have you! Sorry if that campus visit was super weird. It’s a great time to be a Tiger! This guy even made you this sign! Up next: VIRAL VIDEOS.”

10. Nyjer Morgan, STILL THE BEST
He’s practicing with the San Jose Sharks. “I’ve been a diehard fan since the team came to San Jose in 1991. I will never forget the George Kingston and Patty Falloon days. I’m not sure the guys are ready for me!” Patty Falloon! Still! The! Best!