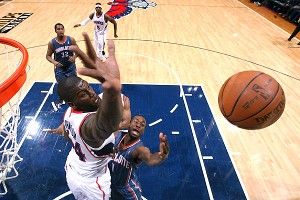 Welcome back to the Ivan Johnson Chronicles.

In Part III of this infinity-part series, I take a look at the single most important piece of Ivan Johnson-related information that has surfaced thus far. Sent to us by a man they call “Ed” is a 2008 public radio interview between host Dick Gordon, former troubled basketball player turned coach Mack Cleveland, and his protégé, Ivan Johnson.

In the first two installments of The Ivan Johnson Chronicles, I have often alluded to how “interesting” Johnson is, because he’s not the typical NBA basketball player. He doesn’t seem caught up in the slightest with the glitz and glamor and fame of the NBA and more treats it like a job that he must show up for every day in order to survive.

Transcribing a 40-minute interview is not my idea of a fun night, that is, unless 20 of those minutes involve listening to Ivan Johnson talk about his life. I could go on about how it impacted me, but instead I’ll simply shut up and let you read (and listen, PLEASE LISTEN) about the Ivan Johnson story, as told by Ivan Johnson.

Excerpts from interview on “The Story,” American Public Media, April 2008

IVAN: I’d say about the 12th grade, when I started dunking on people.

Dick: And were you getting a lot of interest from college coaches at that point?

IVAN: Naw, not really, because we wasn’t winning. It was just me on the team. I mean, I had a couple of other players on the team, but they wasn’t as good as me.

Dick: So, what were you thinking was going to become of your basketball career?

IVAN: I didn’t really think nothing of it, was just going to graduate high school and just get a job or whatever.

Dick: You weren’t planning on going to become a professional basketball player?

IVAN: I was gonna try, but there really wasn’t too many schools looking at me.

Dick: What kind of job were you thinking you might get?

IVAN: Driving an 18-wheeler or something.

Dick: And so who kept you working at basketball? What was it that kept you at it?

Dick: I mean, there’s a lot of kids who see basketball as the ticket to a much more comfortable life, are you one of those? Is that what you were thinking?

IVAN: Yeah, I mean, who wouldn’t want to have a job that they like to go to every day?

Dick: Yeah, no kidding. What was your mother saying?

Dick: Ivan says that when he started playing, seriously, in high school, his mother was a great support for him.

IVAN: She knew I was a talented kid, but she knew how my attitude was, so she [didn’t come] to my games a lot.

Dick: She didn’t come to your games?

IVAN: Naw. I didn’t have nobody coming to my games. I mean, I got used to it, so it really wasn’t nothing.

Dick: You said that the reason your mother didn’t come to your games was because of your attitude.

IVAN: Yeah, she didn’t like me cursing a lot. And that’s what I used to do on the court.

Dick: Who were you cursing?

Dick: Was there any one particular incident that you can think of, Ivan, you look back on it now and you think, Oh man, what was I doing?

IVAN: [Sighs] Let me see … When I spit in the crowd. And I punched a hole through the wall in the gym. [Laughs.]

Dick: So everybody was watching.

Dick: What did people say about you?

IVAN: I was out of control. Wasn’t coachable.

Dick: Were you out of control?

IVAN: Yeah, I think I was. ‘Cause I was still growing up. I was still playing around a lot.

Dick: But you were a talented basketball player, right?

IVAN: Yeah, it was no doubt about that. But my playing around in school got in the way of my basketball. Dealing with the principals, dealing with teachers, parent conferences, suspensions, all that.

Dick: What did you get suspended for?

[Johnson is at Los Angeles Southwest]

Dick: Were you guys working together at Los Angeles Southwest when Ivan got suspended during the playoffs? Were you guys together?

Mack: Yeah. And that was probably like the first clash during a game, I kept trying to tell him: “Ivan, do not say anything to a referee, he’s going to tech you, you’re going to get your second tech,” and what ended up happening is he already got the first tech from the same referee, so —

Dick: For cursing out the referee?

Mack: Right. So the next tech wasn’t really a big deal, I mean Ivan didn’t really say nothing to the ref; Ivan kicked the floor after getting fouled and falling.

IVAN: Yeah, I went up for a jump shot and another guard came from my backside and undercutted me, and I hit the floor and the dude like landed under me and they called a foul on me.

Mack: And let me just say, he was having the best game he’s probably had the whole year. He had 28 points and about 14 rebounds and it was still like seven minutes left in the game. And the ref tech-ed him. and that was it. That was our chance to win the state championship. It was gone at that point.

Dick: That meant that you were out for the final game, right?

Dick: Which your team lost.

IVAN: Yeah. They played hard, though; they only lost by one point. It was hard to watch, because I knew I was better than most of the players on the court, and I knew I had messed up.

Dick: I read a quote from your coach at the time, head coach Reggie Morris, saying at the end of that second game, you were just crying in the locker room.

IVAN: Yeah, because I knew I hurt the team and I hurt myself and I hurt the coaches. And I felt bad about it. I knew that they gave their all on that court.

[Johnson arrives at to University of Oregon]

IVAN: It got later on into the season, started getting into it with some of the players. I mean in practice I go hard, I go so hard, the other players going to the coaches, talking about I hit them too hard in practice. So I confronted them about it, they say their little words, I say my words, and it might escalate from there.

Dick: Did you wind up in a fight with any of these guys?

IVAN: Yeah, I fought one of them, but it wasn’t really nothing, it was just pushing.

Dick: Not great for team spirit, though.

Dick: What happened next?

Dick: You still didn’t have this temper under control.

IVAN: Naw, not really. I wanted to perform at my best, but I was messing up at it. So I’d get mad at myself, and then it would get even [worse].

Dick: Did you throw it away, then?

[In the NBA D-League, after mom has just passed away.]

IVAN: I mean, I always told her that I’d make it so she wouldn’t have to work no more, and by her passing I told her I promised her that I wouldn’t quit, I wouldn’t give up. So now, that’s my main thing. I know she watching me, so I gotta go hard.

Dick: So you’re still doing it for her.

IVAN: For her, my brother, my niece, my daddy, ’cause don’t none of them people really got nothing right now. I’m the only person that can still do something. If I don’t do something, we’re gonna be out on the streets.

Dick: That’s a lot of pressure you’re putting on yourself, Ivan.

IVAN: Yeah it is, but everybody faces pressure, man.

Dick: You still talk to your mom?

IVAN: Yeah, I talk to her every day. Little stupid stuff I see in the streets. I laugh with her, talk with her, a pillow that she had in the house that she used to sleep on, I keep that with me all the time. Wherever I go, I keep her obituary with me, just so I can see her face, so I won’t forget how she looked. Before she passed, I got her face tattooed on me, so I’ll never forget how she looked. And that means so much to me.

Dick: You’re still just on that edge of success and basketball and I wonder if it’s any easier now that it’s just you. I don’t mean to suggest for a moment that it’s a good thing that your mom’s not around, don’t misunderstand me, I’m just saying it’s just Ivan. And while you’ve got other family members depending on you, it’s kind of up to you now.

IVAN: I mean, I got to let all that other stuff go. As far as talking to the refs, complaining all the time, I just got to show my talent. And show people what I can do. And show that I am coachable, I am a good player.

Dick: You’ve had a few chances to do that; can you grab this chance?

Dick: I mean, I have to wonder about something. You’re in San Antonio, you’re going to be there when the stars of this year’s college basketball teams are duking it out, these guys are younger than you. You’re watching players that are 19, 20, 21 years old, and they’re younger than you, do you wonder if maybe you missed your chance, or is it still there for you?

IVAN: Naw, because I know I can go with the best.

Dick: No doubt in your mind?

No longer is this a player who simply amuses me with his outward appearance and tunnel-vision approach to being a professional basketball player. There’s no going back to that place anymore, after listening to this interview, because I’m now emotionally invested in his future and with him finding peace within himself.

You have to root for this guy. When longtime head cases finally uncase their heads and figure out how to behave like upstanding citizens, that’s always something to cheer for. Overcoming demons, never giving up, feeling responsible for those in need around him — these are just some of the reasons that Ivan Johnson is just now coming into his own, as a 27-year-old rookie for the Atlanta Hawks.

About Last Night: Gronk's Boot Was Made for Talkin'