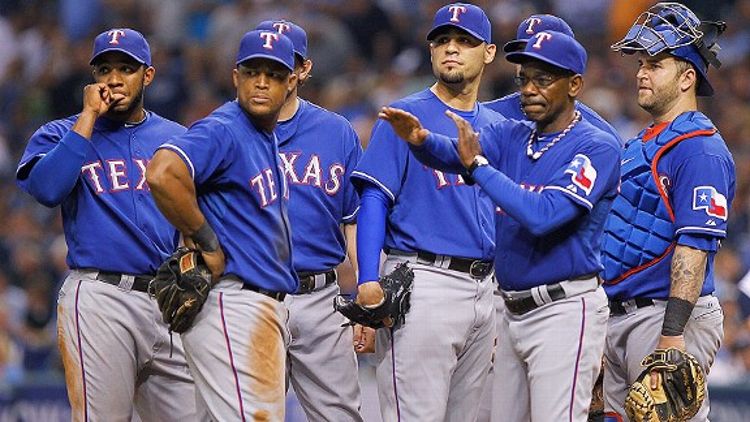 In any given baseball game, either side has a legitimate chance to win. Stack Roy Halladay and the Phillies against the Astros’ worst pitcher 100 times, and Houston’s going to pull a few games out. In the playoffs, there are no truly bad teams, which makes outcomes that much more unpredictable.

We know about the giant impact that little managerial mistakes can have. But there was more last night. Much more. Nearly seven hours of tightly contested baseball yielded Game 3 wins for the Rangers and Tigers, putting Texas and Detroit on the verge of making the ALCS. But both games could have turned either way, the final outcomes resting on incremental moves and tiny, excruciating setbacks.

The Rays’ 4-3 loss at Tropicana Field in Monday’s opening game featured a good half-dozen heartbreaks for Tampa Bay. It started with an offensive drought that mirrored the team’s regular-season run-scoring problems, rather than the Rays team that counted 15 runs in the first two games of the ALDS. Per ESPN Stats & Info, the Rangers’ Colby Lewis became just the ninth starting pitcher in major league history to give up one hit or fewer in six or more innings of a road playoff game. That despite the Rays’ attempts to stack the order with lefty hitters (including sub-Mendoza shortstop Reid Brignac and light-hitting catcher John Jaso) against a pitcher who’d allowed an OPS more than 200 points higher vs. lefty hitters than righties this season. Lewis absolutely destroyed Evan Longoria, striking him out three times, the last of the three coming after Longoria couldn’t hold up on two pitches way off the plate, then struck out swinging on a fastball at his eyebrows. Lewis pitched an excellent game, threw 62 of 93 pitches for strikes (11 swinging), and deserves accolades for his accomplishments.

But he had help.

Matt Joyce, the Rays’ cleanup hitter and a stealthy threat against right-handers, who saved the Rays’ season before Dan Johnson did with his game-winning three-run homer a week ago off Rafael Soriano, worked the count to 2-0 leading off the 2nd. He got the pitch he wanted, a fastball right down the heart of the plate … and flied out to right, the sound of his bat indicating he missed the sweet spot, Joyce’s grimace betraying the look of a man who knows he missed a golden opportunity. The next batter, Johnny Damon, might have been safe on a chopper to first … but we’ll never know, because Damon slid feet-first into first, slowing himself down and earning him honorary entry into the Lava Pit Club. Reid Brignac got a pitch to drive with two outs in the 3rd … and flied out to center. Joyce and Damon both worked the count to 3-0 with a runner on second in the 4th … and squandered those chances.

The 6th may have been the Rays’ most secretly disappointing offensive inning. Brignac, who walks less often than nearly any other position player in the game, drew a leadoff base on balls after taking an eye-high fastball for ball four. Rangers pitching coach Mike Maddux, who’d seen Lewis miss his spots many more times than you’d expect from one pitching a one-hitter, called the bullpen to have reinforcements standing by. But Lewis, and the Rays, ensured that wouldn’t be immediately necessary. After seeing pitches beautifully and working a 10-pitch at-bat in the 1st, Desmond Jennings came back to blast a solo homer leading off the 4th. So naturally Joe Maddon ordered Jennings to bunt in the 6th. He failed twice. Then, forced to protect the plate with two strikes, Jennings swung at a pitch low and out of the strike zone, and flied out to right. The next batter, B.J. Upton, got a meatball of an 89-mph slider down the middle … and swung through it, then struck out on a deadly slider on the next pitch. When Longoria struck out for the third time, that ended what could have been a big Rays inning with no runs scored. For the game, the Rays’ 2-3-4 hitters went 0-for-8 with five strikeouts (with five walks). Credit Lewis certainly, but save some scorn for the Rays, who blew several big opportunities.

The last three innings showed a Rangers team that could do no wrong, and a Rays team that couldn’t do enough to get it right. Maddon wasn’t about to pull David Price before the 7th, not with Price hurling a shutout while managing his pitch count well. But that also posed a potential problem against two premier righty power hitters in Beltre and Napoli, with Price’s OPS allowed also more than 200 points higher against opposite-sided hitters. Beltre belted a juicy fastball middle-in for a sharp single to left, then Napoli crushed a shot over the wall in left-center to give the Rangers a 2-1 lead. Price was gone three batters later; two batters after, Josh Hamilton strode to the plate with the bases loaded and two outs. Instead of going with Jake McGee, the young, flame-throwing lefty who’d become an integral part of the Rays bullpen down the stretch, Maddon tapped his old security blanket, J.P. Howell, to face the one-time AL MVP.

The Rays look for any and all matchups to exploit, even when small sample sizes might make you queasy about making drawing broad conclusions. A novice might find deep meaning in a 4-for-9 stretch by a hitter against a certain pitcher. Level 2 is being willing to ignore small sample sizes and go with common sense. The Rays try to reach Level 3, delving into the small sample sizes other teams won’t touch and look for patterns that can be exploited in the future. In this case, the Rays didn’t just see a relatively pedestrian 2-for-8 career line for Hamilton against Howell. “All the homework we do, that’s our best one-on-one matchup, we think, out of the bullpen based on the kind of stuff J.P. has and what he’s done to left-handed hitters this year.”

All true, all also ignoring that Howell had turned into a meltdown machine this season, getting rocked in the first half of the year after coming back from surgery, posting a big August, then blowing huge games against the Orioles and Yankees in September, either one of which could have knocked Tampa Bay out of its playoff race. Even if you ignored Howell’s September disasters and fixated on his .581 OPS allowed vs. lefties this year (in a very small sample), McGee was even better, limiting lefties to a .510 OPS while posting a superior strikeout rate. McGee should have been the call. Instead, when Howell tried to sneak an outside-corner curve past Hamilton, he saw the pitch get whacked to right for a two-run single, making the score 4-1 Rangers.

Several ensuing moves would also swing the game Texas’ way. In the bottom of the 7th, the Rays loaded the bases against Darren Oliver, pinch-hit righty-hitting Sean Rodriguez for Jaso, then saw Ron Washington counter with Alexi Ogando, turning Rodriguez into a glorified pitcher with the bat (.212/.278/.337 lifetime vs. RH). Rodriguez and the next pinch-hitter, Sam Fuld (.255/.323/.387 vs. RH), both grounded out, limiting the Rays to one run in what could have been a huge inning.

Jennings bashed another homer to start the bottom of the 8th, making him the first under-25 player to post a multi-homer game in the playoffs since Upton and Longoria pulled it off three years ago. But Deezy’s exploits would go wasted. After working his second walk of the game and drawing six throws to first, Upton finally took off for second … only the Rangers were ready, calling a pitchout that erased Upton from the bases. When Longoria and Joyce followed with walks, the Rays had runners on first and second with one out — when it could have been bases loaded, nobody out. The Rangers replaced struggling Mike Adams with Mike Gonzalez, who promptly fanned Johnny Damon on three pitches. Washington stayed aggressive, spotting Zobrist’s strong splits against lefties (this year anyway) and bringing in Neftali Feliz to douse the rally. The hard-throwing closer chucked a filthy slider that broke a foot inside, forcing Zobrist to commit and inducing a huge strikeout to end the inning. What could have been a game-winning rally for the Rays turned into a one-run inning that left them still trailing.

The 9th didn’t figure to go well with Casey Kotchman, Sean Rodriguez, and Kelly Shoppach due up, Feliz pumping near-triple-digit gas, and no one but human out machines Elliot Johnson and Jose Lobaton waiting on the bench. Rodriguez did manage a bloop single after Feliz went away from his fastball on 0-2. Then Maddon committed one final gaffe. After Shoppach worked the count to 3-2, the Rays had to decide whether to send Rodriguez, a speedy runner who could steal second even if Shoppach struck out, in the process protecting against one of baseball’s slowest runners putting the ball on the ground. Rodriguez didn’t go, Shoppach hit a tapper that Beltre fielded in freaking left field, and he still had time to start a game-ending, around-the-horn double play.

When you’ve built a lineup full of mashers and a bullpen full of executioners, whether through scouting and development, free-agent signings, or trades, you set your opponents up to fail, and you to succeed. The Rangers added two beasts like Beltre and Napoli to an already potent lineup and made them their no. 5 and no. 6 hitters, wielding offensive talent that few other teams can touch. They stayed aggressive at the August 31 waiver trade deadline, snagging a capable lefty in Mike Gonzalez right at the wire, adding another weapon they could deploy in a big spot to get through a season-changing game. Compare those assets to the Rays’ roster, which includes a beleaguered Howell, a punchless bench, and severely limited role players like Rodriguez, Jaso, Brignac, and Shoppach seeing major playing time, and the gap becomes obvious.

The superior team doesn’t always win a short series, let alone a single game. But when you have talent advantages throughout your roster, you can exploit them. The Rangers may have partly won Game 3 because Ron Washington and his staff outmanaged Joe Maddon and his staff. Mostly, they won because they’re just better.