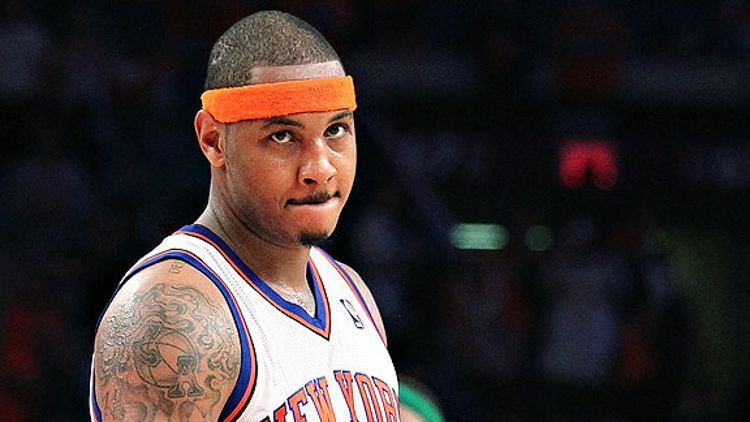 Last season’s NBA storylines are indefinitely paused because of the lockout. High up on that list of suspended intrigue is how the Knicks will fare in a full season of Carmelo Anthony and Amar’e Stoudemire paired together.

During a media blitz for his shoe launch, Anthony spoke with Grantland’s Jonathan Abrams about his recent surgeries, frayed relationship with George Karl, and his desire for the Knicks to become a defense-first team. C’mon. Stop laughing!

You’ve got to be pretty relieved that you’re not a free agent right now and waiting in limbo during the lockout, right?
I’d be having nightmares right now if I were to do that. It would just be a bad situation, because you wouldn’t know where you would be at. Would you re-sign with your team? Would you go someplace else? And you would have to wait until after the lockout is over, so when it’s uplifted, guys still have to worry about that. You’d only have a certain amount of time and at that point, you might make a decision that you’d regret later on.

Where do you think the middle ground is between the players and the league?
I think about it all day, every day. But it’s not just me. There’s 400 other players out there who all have to be on the same page moving forward.

You tweeted the other day that “This shit sucks.” Most players feel the same way, but wouldn’t put it out there like that.

Click here for all of our interviews with fascinating people from the worlds of sports and pop culture.
It does. At the end of the day, we’re not playing. The fans are upset that they’re not having the chance to watch games, especially after coming off of a monumental and historical season last year. This season was very, very highly anticipated. Not being able to go out there and start in the beginning, it sucks.

You recently revealed that you had offseason knee and elbow surgeries. How much did those injuries hinder you last year?
That’s been bothering me for the last three or four years. I just thought right now was the perfect time for me to get in there and get it done. I feel great. I feel better now than I did before the surgery.

How long would it take for you to be ready for an NBA game right now?
I’m ready. If they uplift it tonight, I’d be ready. I’m in playoff mode right now.

Are you going to bring a basketball game to New York soon like the games in Washington D.C., Los Angeles, and Philadelphia?
We’re working on that as we speak. I’d invite a lot of the same guys [who have] been playing in the other games. I’m excited about it. I’m going to try and get the best of the best. I want to make the New York game one of the biggest games.

You said you want the Knicks to be known as a defensive team. Where does that start?
It starts with everybody. But I was telling somebody earlier, it’s like New York has never been known for being a defensive team. It just so happened with the trade that happened with me coming here, it’s like New York is strictly an offensive team. But we want to end that. If I were to [go] to another team and they were, quote-unquote, “known for playing defense” then I’d be known for being the best defensive player in the league. But now I came to a team that’s not known for playing defense, it’s like “he’s the worst defensive player and they’re the worst defensive team.” But we can’t worry about that. We’re good. We know what we have to work on and talk is cheap.

Do you take it personally when people say that you’re not a good defensive player?
Absolutely, absolutely. I understand where it came from. I know why it was said, but that’s neither here nor there.

Why do you think that’s said a lot?
I would just say it was just perfect timing for George Karl to come out and say what he had to say. I just felt like after all these years, he could have said that when he was coaching me, but he decided not to. He decided to wait when everything was still a sensitive topic and people were sensitive. The whole league was sensitive, but I guess he felt like that was the perfect time to say something.

Have you talked with George Karl since the trade?
No. Not at all.

Do you think that’s a relationship that can be repaired?
You’ve got to understand, I wouldn’t say I had a bad relationship with him. So I don’t really know where that’s coming from. I’ve been with him for six and a half years. Unfortunately, we had our ups and downs earlier, but I [have] had his back since he got there, from going in and sitting down with the front office and saying, “We need him here.” I’ve done rolled with him plenty of times. I wouldn’t really say on my end that I have less a relationship with him. If you ask him, he might say something different. I wouldn’t know.

What was the weirdest thing that happened when you look back on last winter and all the trade speculation?
Just not knowing what was going to happen. Not knowing where I was going to end up at and still have to go out there and perform and play at a high level. But at the end of the day, all people wanted to see was me play basketball.