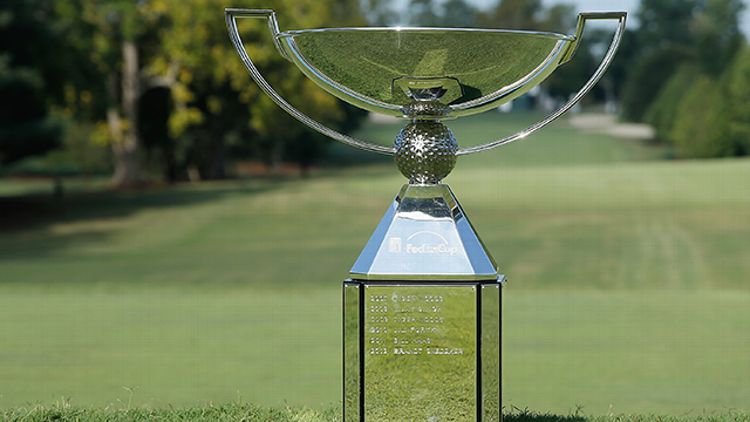 If you’re a golf tournament, and your name isn’t the MastersBritishOpenU.S.OpenPGAChampionshipRyderCup … well, you have a prestige problem. And by prestige problem, I mean that the average sports fan probably doesn’t care about you. This is the nature of golf, and it’s why Tiger Woods can dominate a PGA Tour season and still have talk radio pundits across the country wondering if he’s “lost it.”

There have been a few creative remedies to the prestige problem. The Players Championship tries the “fifth major” tag, and it has worked wonders. The Presidents Cup copied the Ryder Cup format, but replaced the Europeans with everyone from anywhere that isn’t Europe. That hasn’t taken off in quite the same way, but it’s only been around for 20 years. The Accenture Match Play Championship combines everything we love about the Ryder Cup and March Madness into one event, and I personally believe it will become the next big thing in golf. But the FedEx Cup takes a simpler, age-old approach: Throw money at the problem. Like, $10 million worth, all to the winner.

Unfortunately, defining the FedEx Cup is not so simple, and will take some ’splainin’. (If you think that’s part of the problem, you would be correct.) The basic point to understand is that it’s a point-based playoff system held each August and September over four tournaments, with the goal of crowning a PGA Tour champion at the end. In theory, this should be more exciting than just going by the money list, which Woods clinched sometime in early January (an exaggeration, but only slightly). In practice, it hasn’t been an easy sell.

Before we get there, though, let’s delve a bit deeper. The FedEx Cup defines everything that happens from January to August as the “regular season.” Each golfer earns points based on his finish at each event (the total distribution is based on the strength of the field), and at the end of August, the top 125 on the points list make the playoffs.

The 2013 finale begins tomorrow, and the final 30 golfers will be vying for the $10 million prize at East Lake Golf Club in Atlanta. Woods briefly lost his overall points lead when Henrik Stenson won the Deutsche Bank Championship, but gained it back last week with a strong showing at the BMW. Now, the points are reset to predetermined values to draw the field closer together and give each of the 30 golfers a possibility to take the FedEx Cup.

You can see the full field here, but the gist is that only the top five golfers on the points list can guarantee themselves the $10 million by winning the tournament outright: Woods, Stenson, Adam Scott, Zach Johnson, and Matt Kuchar. Everyone else theoretically could win the top prize with a win at East Lake, but they’ll need help. In Dustin Johnson’s case, his position at no. 30 means he’d need the entire field to finish in perfect reverse order to take the Cup. Not impossible, in the strictest definition of the word, but … yeah, impossible. Others in the top 10, like Steve Stricker, Phil Mickelson, and Justin Rose, have a pretty good shot if they win and someone like Woods or Stenson doesn’t finish second.

As a golf fan, I’m happy to admit that the format has me hooked. I’ll watch the finish, if only for the vicarious thrill of imagining all that wonderful, glorious money. But as to the larger question of whether this playoff system “works,” the answer isn’t quite as clear. The PGA Tour has a tough task here, because its dual responsibilities are to determine a true champion while manufacturing a sense of drama where none existed in the past. Golf is a cumulative sport, and no matter what happens this weekend, there can’t be any argument that Woods has had the best PGA Tour season of anyone. He won five events (nobody else won more than two), earned more than $8 million (second place was just more than $5 million), and finished the season as the no. 1–ranked golfer in the world. Nothing that happens at East Lake can change that.

And that’s the inherent problem; the title of “PGA Tour champion” isn’t very meaningful right now. Since the FedEx Cup began in 2007, results have varied, but the upshot is the same. Sometimes the best golfer wins, in which case it cements something we already knew, and sometimes the best golfer doesn’t win, in which case it doesn’t really register (sorry, but nobody thinks Bill Haas was the best player of 2011 just because he happened to win the last tournament of the year). The $10 million is a shiny prize, but it can’t erase our memory of what happened throughout the year, and therefore it can’t change our perception.

But there’s one idea that might work. Why is it that the Super Bowl and World Series are still compelling, even though the “best” team of the regular season often loses (sometimes much earlier than the championship)? Isn’t the problem essentially the same? Surely the sample size of a 162-game season, to use baseball’s example, is more meaningful than a few playoff series when randomness and luck take center stage. So why do we care so much about the World Series?

To me, it’s because of the head-to-head aspect. Ditto for the Super Bowl. Sure, the Patriots might go 16-0 in the regular season, but in the end they have to prove themselves at the Super Bowl against the Giants. And if the Giants win, well … we saw who the better team was that day, didn’t we? It doesn’t mean the Giants were truly better than the Patriots — a season’s worth of results says pretty clearly that they weren’t — but we have a specific matchup to look at and say that, yes, they won when it mattered.

The problem with golf is that in a stroke play event, the players are battling the course (and their own nerves) rather than each other. If Kuchar wins in Atlanta this weekend, it won’t feel like he really beat anyone, and it won’t feel like he’s the true champion of anything more than a single tournament.

So why not finish the year with match play? Keep the current format, but reduce the field to 16 at the end of the BMW Championship (or at the end of the Tour Championship, if you want to add a week). Then turn the final weekend into a match play event with the top 16 competing in a single-elimination format. It doesn’t make the result any more fair, in the view of the larger regular season, but remember, the Super Bowl and the World Series aren’t fair either. What it does instead is add the missing element: head-to-head drama. That’s why we care about the playoffs in those sports. The playoff drama has overwhelmed any concern about true justice, because it’s just so damn compelling. They’ve become iconic annual events. Match play could do the same for golf, and maybe the fans would start to take notice. That should be the goal, because in terms of sports prestige, money doesn’t talk; people do.

So forget the $10 million check. Bring the drama, and you might get the fans on board. Get the fans on board, and it will legitimize your playoff system and create an iconic event. When that happens — and only then — you can crown a real PGA Tour champion.