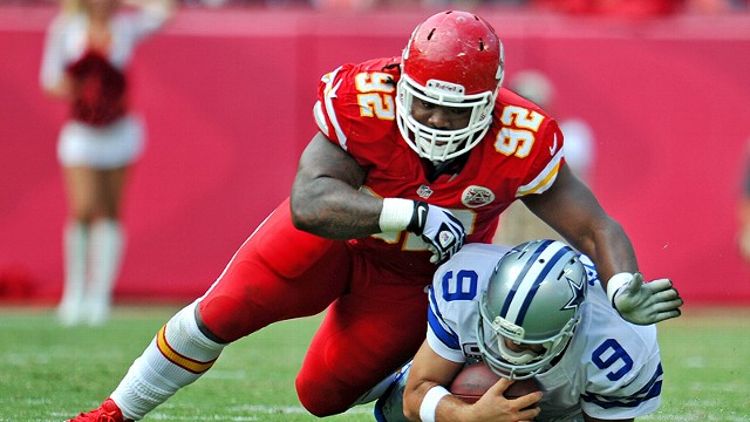 Almost without exception, there’s one thing you can count on from every NFL rookie — at some point, each of them will be completely, hilariously embarrassed. This isn’t really their fault. Even the highly drafted, quickly effective brand of first-year player is bound to face this type of moment. Whether it’s at the end of a long drive, or early in a game before they’ve become entrenched in the action, somewhere along the way, the muscle memory and lesser physical demands from the college game are likely to take over. It isn’t laziness. It’s nature.

Fourth overall pick Lane Johnson was great in his debut for the Eagles in Week 1, fitting right alongside his teammates as they pushed the Redskins around the field and allowed LeSean McCoy to rack up more than 180 yards on the ground. And with the confusion that resulted from Philadelphia’s new-look offense, Johnson didn’t have to worry much about Ryan Kerrigan teeing off on the quarterback.

Back when he was a Colt, Dwight Freeney had the reputation for having the best spin move of any pass-rusher in football — a reputation that was deserved. Spinning made Freeney’s already compact frame even more difficult to get a hand on, and it regularly played a role in Freeney’s seven double-digit-sack seasons in Indianapolis.

Freeney isn’t the same player he was five years ago, but what made that spin so dangerous is how small a misstep it takes from an offensive linemen for the move to work. And on Sunday, Freeney was playing a rookie prone to just that type of subtle mistake.

This play came near the end of the first half, and I have to assume it wasn’t one Johnson was excited about seeing when the Eagles watched film on Monday morning. It’s difficult to tell, but I’m pretty sure he never gets a hand on Freeney. That would be bad enough, but Johnson is so off-balance that he actually crumbles into a heap as Freeney moves by and gets a big shot on Michael Vick. All it took was the smallest shift of too much weight forward, and Johnson was left with his knees buckling and his ego severely bruised. There will be better days. This was just an instance of a veteran pass-rusher (arguably the most Veteran Pass-Rusher) teaching a rookie a lesson.

Travis Frederick had less of an excuse. Dontari Poe has only a one-year edge on the Dallas center, but Sunday, that was enough. Poe had a solid if unspectacular rookie season for Kansas City, but in the first two weeks, his performance (and facing the Jaguars) has played a big part in the Chiefs leading the league in DVOA through two weeks.

At 346 pounds, and with 44 reps of 225 pounds on the bench press at the 2012 combine (eight more than the next best defensive lineman), Poe had all the makings of a space-eating, run-stuffing nose tackle for the Chiefs’ 3-4 defense. He still does, but the more significant revelation in Poe’s development from his first to his second season has been his ability as a pass-rusher. Poe had a sack and a half against Jacksonville in Week 1, but he was also consistently pushing the pocket — driving Jaguars center Brad Meester toward, and occasionally into, Blaine Gabbert.

Still, though, those are feats of strength that are an extension of Poe’s ability to hold up in the run game. What Poe did to Frederick on Sunday afternoon is something else entirely. This is a play from the first quarter at Arrowhead, and you can see that Poe gets his damage done quickly. One step backward to get Frederick to shift his weight is instantly followed by a swim that gets Poe to Tony Romo. It was his first of two sacks on the day, bringing his season total to 3.5 in just two games. Poe’s main role is always going to be as a run-stuffer in the middle of that defense (especially with Tamba Hali and Justin Houston on the outside), but if he can consistently add to the pass rush, he’ll bring an element that few (if any) of the best pure nose tackles in the NFL have. Poe’s 3.5 sacks already equal the best total Vince Wilfork has had in an entire season.

Williams’s play wasn’t quite as impressive as his 4.5 sacks would lead you to believe, but at the end of the day, 4.5 sacks is 4.5 sacks. Williams’s sack totals in his career have consistently relied on spilling back inside after a quarterback steps up in the pocket, and although that happened more than once Sunday, there were plays like the one above, where it was simply Williams tearing off the edge and managing to get to Cam Newton.

There’s nothing subtle about what Williams does here. The straight rip is the simplest pass-rush move there is aside from straight bull-rushing, but when you’re built like Williams, that’s sometimes enough. The Bills’ defense is still finding itself under Mike Pettine, but if Buffalo can get Jairus Byrd and Stephon Gilmore healthy, and Williams can have a couple more games even close to what he did on Sunday, that should be a defense that causes a lot of trouble in the second half of the season.

The Bob Lilly Award for Run-Stuffing

I’m considering just including a J.J. Watt play of the week. It might be easier. Watt had two sacks and five tackles Sunday, including this play on Chris Johnson two yards deep in the backfield. All due respect to Chance Warmack, but we’re going to have to disagree with him here. J.J. Watt is anything but just another guy.