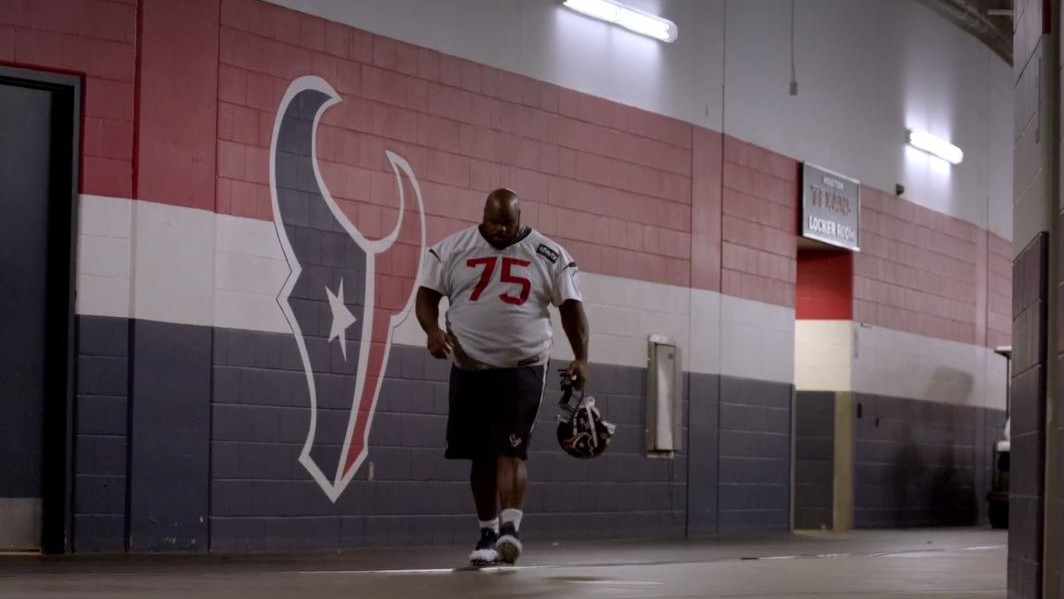 Some things that happened last night in Episode 5, the final episode of the series. 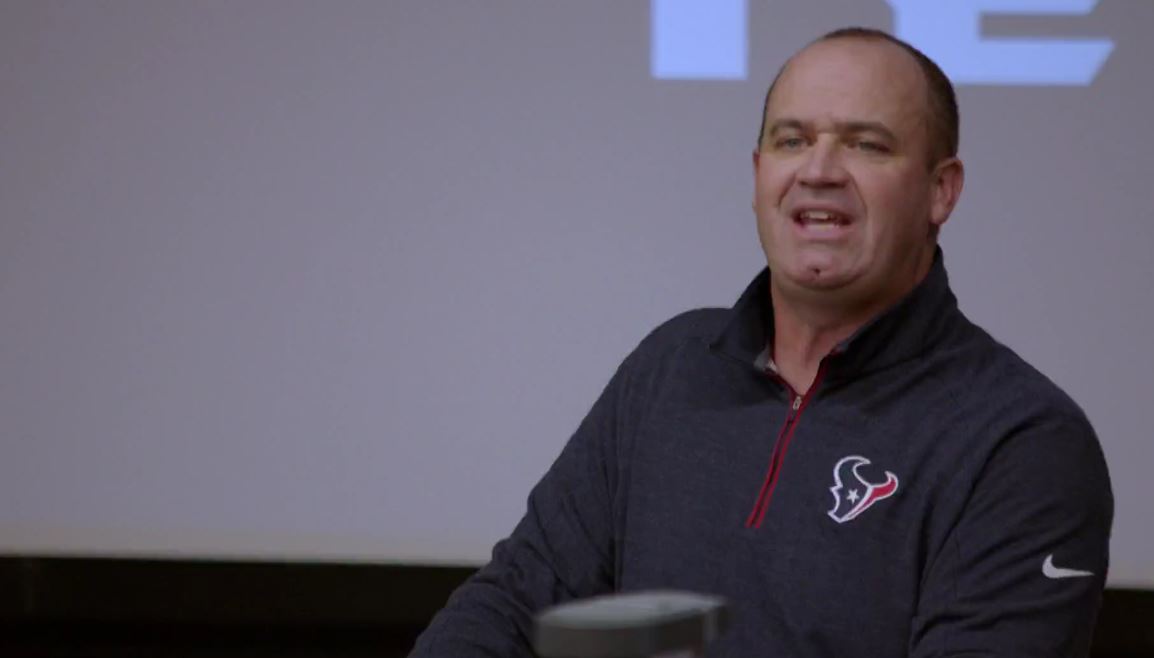 There was no way that Vrabel was ever going to beat O’Brien. There just wasn’t. There’s this really boring and tired joke people say whenever someone does something crazy or wild about how that person “has zero fucks to give.” I probably see it online something like 600 times a day. Coach O’Brien is the inverse of that. He has many FUCKs to give. He has a surplus of FUCKs. He has a plethora of FUCKs. Should you happen to not have any FUCKs, I would direct you toward O’Brien. Surely he will have some that you can borrow when you see him.

Does This Happen to You, Too?

There’s a thing that happens with professional athletes, or at least that happens with me when I watch professional athletes. They’re all just so big and fast and strong that when I watch them I feel like they’re definitely grown men and adults and all older than me and wiser than me. It almost feels like they’re dads and I’m a child. I guess it’s because they’re so big, so it always seems like they’re definitely in control and dads are always supposed to be in control or something. I don’t know. But when I watch the NFL or the NBA that’s a thing I almost always end up thinking about, especially when something bad happens, like if they lose a big game or get cut from the team or whatever. My first reaction is always, “Well, he’s a fully mature man, so I’m sure this won’t affect him that much.” But then I remember, “Oh. That guy’s only 22 years old,” and then I think about how much of a baby I was at 22 (or even 32) and it’s just like, “Man, I don’t think I’d be able to handle that kind of stress.” Does that happen to you, too? 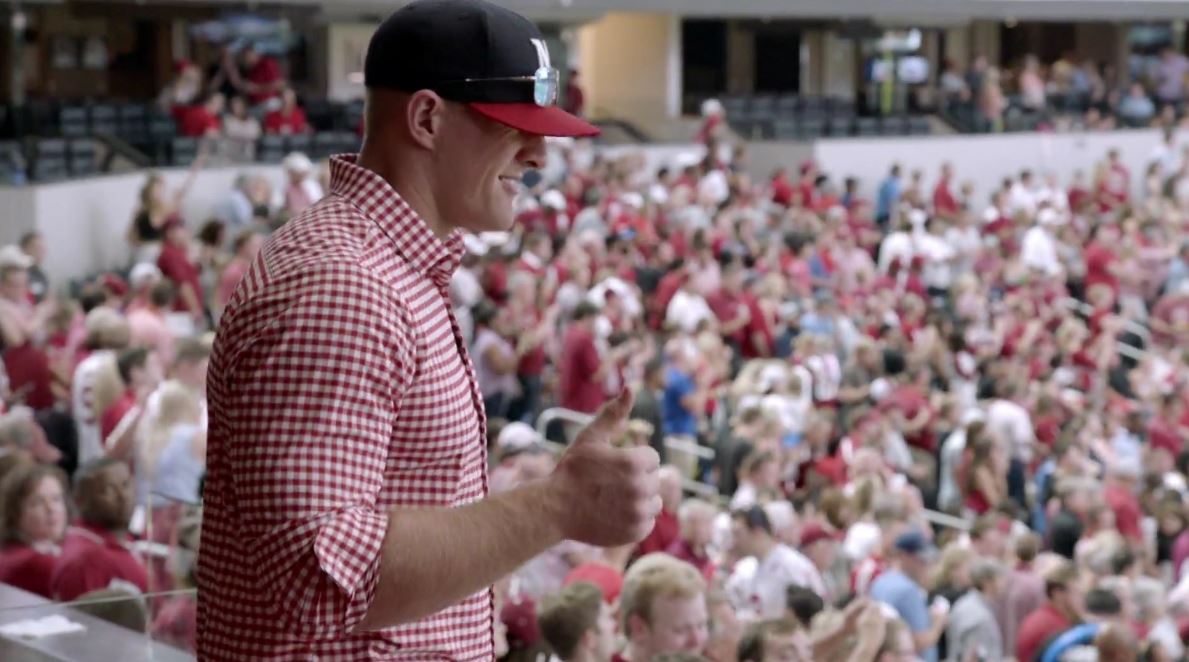 1. J.J. Watt talking about the price of carpet on a private jet.

1a.  J.J. Watt not being able to open a hotel door on the first try.

1i. J.J. Watt saying to do things with pride.

1j. J.J. Watt standing on the sideline during the preseason game against the Cowboys.

The Secret MVP of the Series 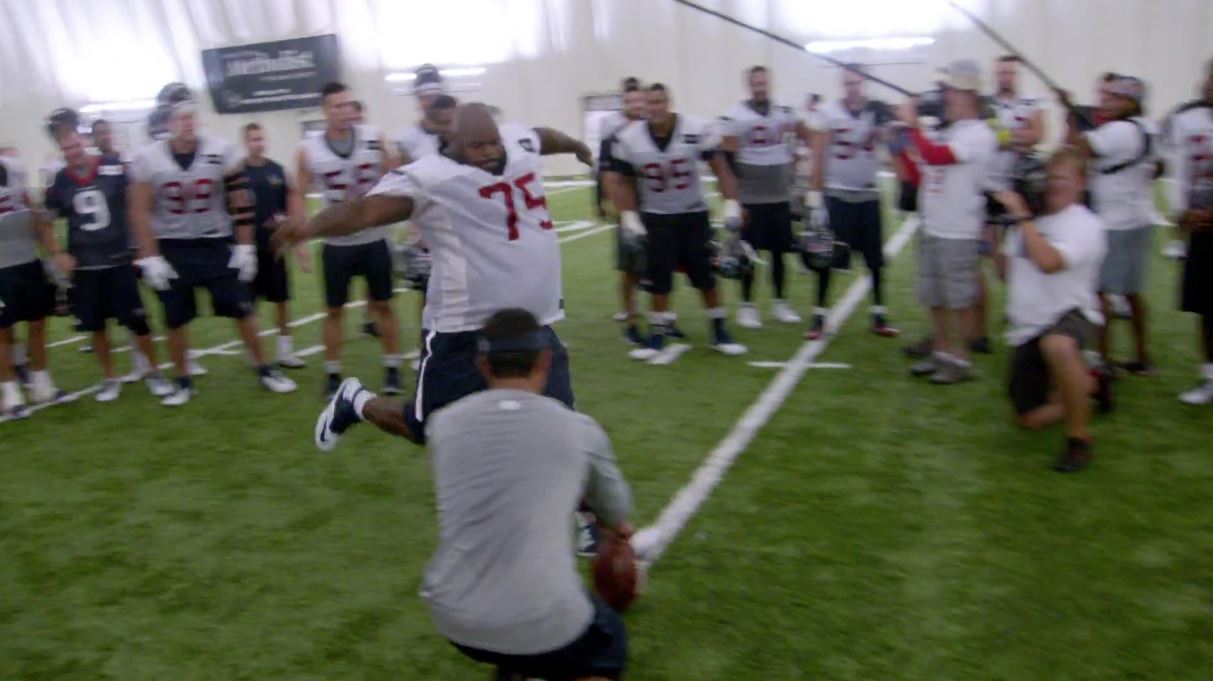 J.J. Watt is the MVP of the team, obviously. And Charles James II is the MVP of our hearts, obviously. And Uzoma “E.Z.” Nwachukwu is the MVP of our affections, obviously. But the secret MVP of the series, the one guy who, without question, whether he was in a scene for 10 seconds or two minutes, was going to say something or do something to make the people around him feel like they made a good decision by choosing to be around him: Vince motherfrigg’n Wilfork. Easy. This episode, it was him in a field goal kicking contest with Carli Lloyd. But don’t forget him telling that joke to the rookies during film study. And don’t forget him making fun of the coarseness of his own feet. And don’t forget him playing basketball. And don’t forget him not trying to spell “spaghetti” with J.J. Watt or eating barbecue with J.J. Watt or talking about breakfast and brunch with J.J. Watt. And don’t forget the overalls — God, don’t forget the overalls.1 Vince Wilfork is beautiful. After Lloyd finished giving her speech at practice, Coach O’Brien said that they wanted to do a little competition with her. He called out to Vince to kick against her. He said, “How about Vince? Mr. Wilfork. Are you loose, Vince?” Vince, his helmet tilted back on his head, arms crossed over his refrigerator chest, shot back the slickest, coolest, most nonchalant, “Hell yeah, I’m always loose.” The players laughed, O’Brien laughed, Lloyd laughed. Vince Wilfork then kicked field goals from 25 and 35 yards. Vince Wilfork is the secret MVP of the series.

The Four Most Excruciating Cuts to Watch, Ranked 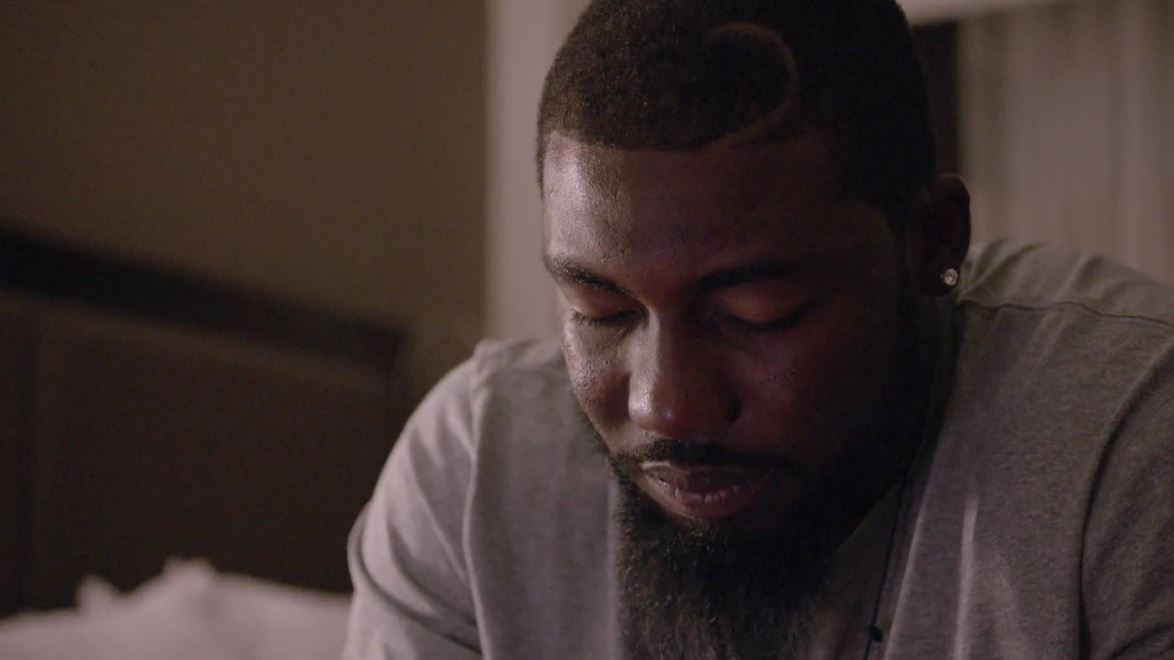 Here’s the thing: I don’t imagine too many people (not directly associated with the rookie linebacker) built up as strong of a bond with Lynden Trail during Hard Knocks as maybe they did with Uzoma Nwachukwu or Charles James II or even Kourtnei Brown. But he makes it into the Top Four Most Excruciating Cuts to Watch because it seemed like each of the times he was featured on the show it was him talking to his woman and his daughter, which means that after he got cut he had to go home and tell his woman and his daughter that he’d just lost his job, and telling your woman and your child (or children) that you were unsuccessful at something is always just so unbelievably hard. I hate that feeling. I hate that feeling so much. 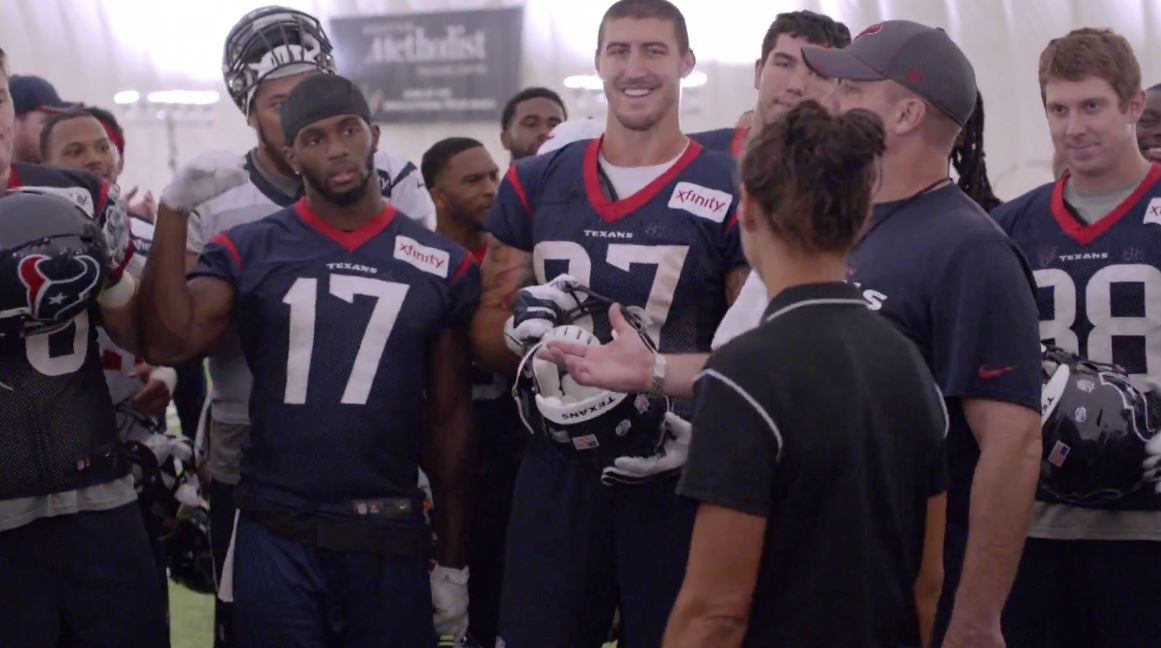 It never really felt like E.Z. was going to make the team, but watching him exist within the Hard Knocks universe, especially watching him become a beam of warm light when he was shown doing anything besides playing football, made it nearly impossible not to pull for him. Even in this last episode, when he was shown off in the background falling in love with Carli Lloyd while she spoke with the team, he just kept emoting his way into your favor. Into your heart, really. He just always seemed so sweet and sincere and charming and, I mean, how do you not get attached to someone like that? How do you not root for someone like that? How do you make it not hurt when you have to sit there and watch the one guy on the show who seemed to only ever approach football/space shuttles/rope swings/everything with wonderment get told very plainly that he’s just not good enough? (“For me, I’ve gotta get a guy that can, you know, run the gamut of routes, all of them, a little bit better than you.”) There’s only one player I’m going to miss more than E.Z. … 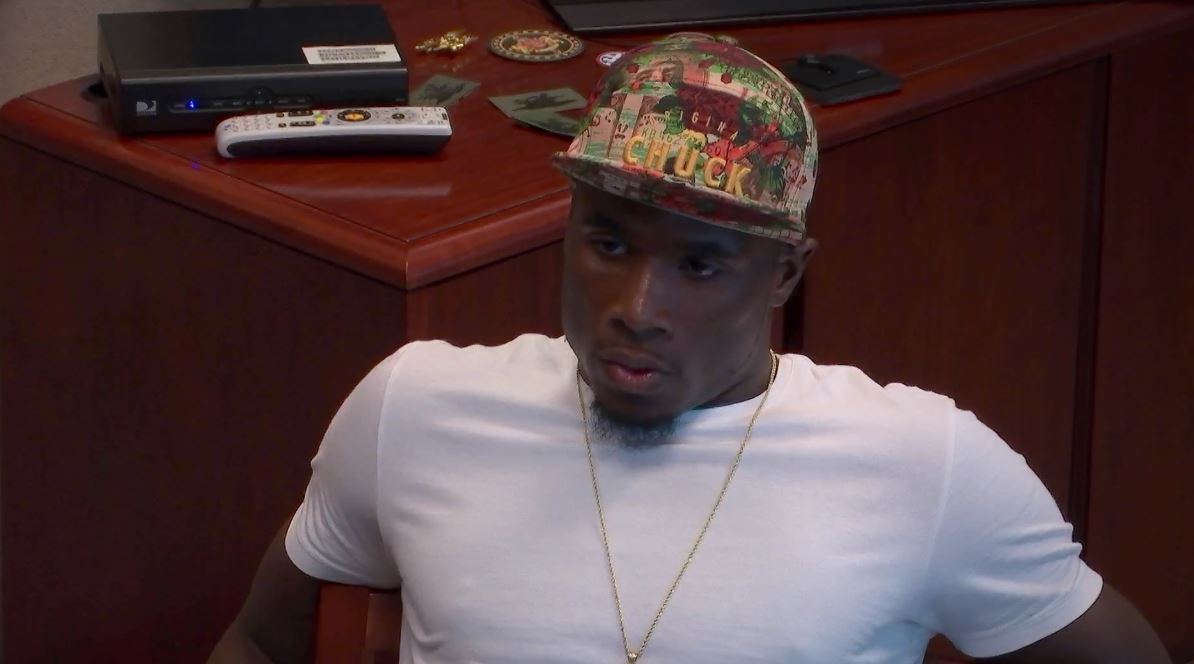 Charles James II, too short and too small and not fast enough and not long enough, was definitely the most beloved long shot on Hard Knocks (and also the one who seemed most aware of his status as a long shot, which probably isn’t a coincidence). And when I read online that he was let go from the Texans a few days ago, I felt a very real sadness and even a little bit of resentment. But the thing that I came to realize shortly thereafter was that it wasn’t that I just really wanted Charles James II on the Texans — I mean, I definitely did want him on the Texans; I would’ve loved for him to be on the Texans. But really I just wanted him anywhere in the NFL, and I didn’t know that until he got picked up by the Baltimore Ravens after he was rejected by Houston. When I saw that he was grabbed by the Ravens, it was just such a neat and exciting moment. There was real joy there. There was real fulfillment. 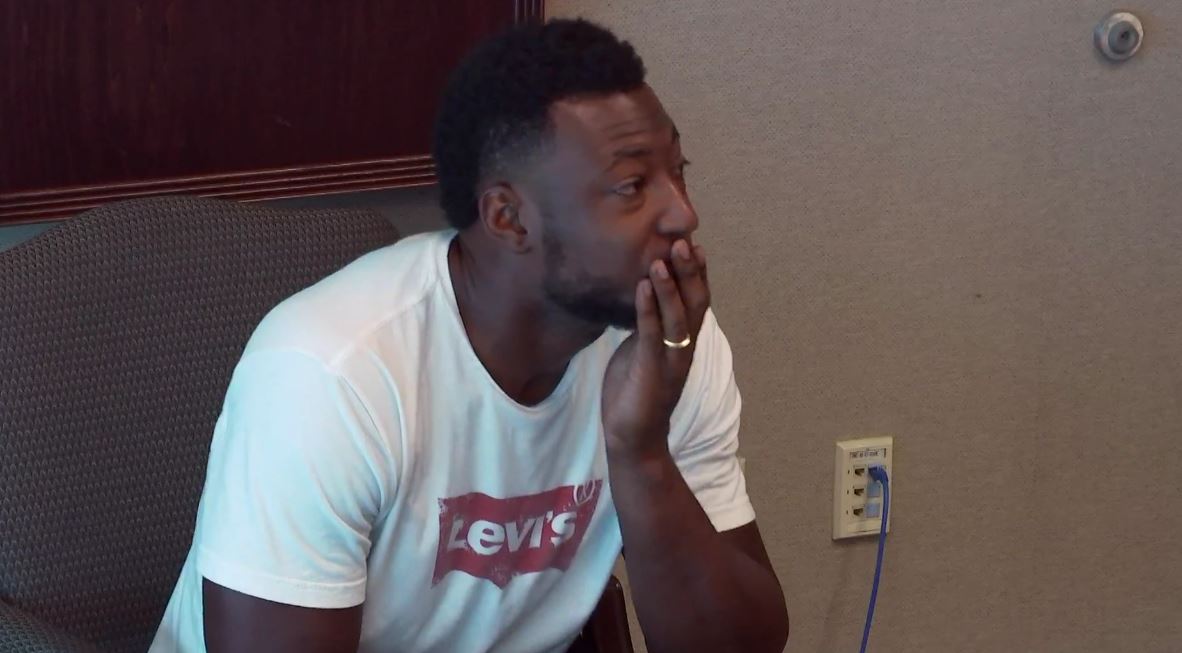 Oh god. Kourtnei had been featured a bunch on Hard Knocks, and it seemed like every time they showed him they mentioned how he’d been cut seven different times in the past three years, but I hadn’t expected his release to generate so much heartbreak inside of me. It was because he was so quiet while it happened, so broken while it happened. He didn’t say a single word. GM Rick Smith called him into his office and Brown didn’t say a thing. Smith asked him, “How you hanging with this,” and Brown just gave a forlorn look and sighed and sat down and shook his head. Smith asked, “Not good?” and Brown just shook his head again and looked off at nothing. Smith explained why he was letting Brown go and again, as Smith talked for two full minutes, Brown said nothing back. He just held his head down and looked devastated. He pursed his lips, he nodded occasionally, he let the disappointment and hurt run all the way out of his face, but he never said a word. It was brutal. It was so bad. It was the worst.2

The Most Houston Moment of the Show

The Hard Knocks guys took sounds from a practice vignette and instead of just keeping it a regular practice vignette, they turned it into a rhythm section thing. It was wonderful, and maybe the best Cool Extra Thing they did, beating out that one thing from last episode where they showed Brian Cushing going through a full day but played it in fast forward and mushed 10 or so hours down into a one-minute clip. It was also the Most Houston Moment of the Show. Because anybody who has ever been in Houston for more than five minutes has heard somebody make a beat out of something that wasn’t supposed to be a beat originally.

My twin sons are in the third grade. The school they go to takes all of the kids into the cafeteria and teaches them to bang out beats on the table for two hours a day. In fourth grade, they teach them how to freestyle rap over the beats. And then in fifth grade, they teach them how to email everyone a link to download their mixtape. Houston is very music-driven. I remember being at the hospital when my third son was born and when he came out the doctor picked him up and was like, “I done came dine / I done brought joy / I done did what / I done delivered a damn boy,” and I was like, “Are you fucking freestyle rapping at me right now?” That’s a true story.

Paisley Overground: Prince's Best Pop Record in a Decade Is Hiding on Tidal