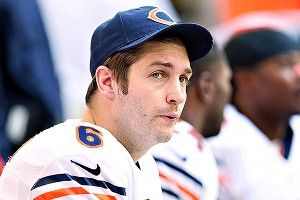 Every year, Forbes puts out a list of the 10 most disliked athletes in sports. Usually, that list is pretty much what you’d guess. A year ago, Michael Vick, Tiger Woods, and Plaxico Burress stood (or sulked) at the top. In this year’s version, released yesterday, the top three again didn’t provide much of a surprise: Lance Armstrong (cheater, Oprah interviewee, all-around dickhead), Manti Te’o (fake dead girlfriend embellisher), and Woods.

The surprise, at least to me, comes at no. 4. With an approval rating of just 21 percent, Jay Cutler is the most disliked athlete in America who’s never given a nationally televised mea culpa. Listen, I’ll be the first to admit that I can’t see anything regarding Cutler with clear eyes, and that the guy kind of seems like an asshole. But is he really more of an asshole now than he used to be?

Cutler’s most public misstep is still the second half of the NFC Championship two years ago, when a knee injury forced him out of the Bears’ loss to Green Bay and everyone with a Twitter account questioned how tough he really was. Coming in second (this is arguable, only because I know plenty of people who thought it was awesome) is Cutler telling Mike Martz to go fuck off on national TV. What’s confusing is that we’re now a year further away from both, and Cutler seems to be more hated than ever.

This season brought its own issues — Cutler shoved J’Marcus Webb during one prime-time game and seemed to blow off Mike Tice in another — but for the most part, those willing to look were given a fairer, more complete look at Cutler than ever before. For an hour each week, he had a radio program in Chicago that proved him to be no less of an asshole, but also to be intelligent, and funny, and the type of guy who’d be welcome in any shit-giving group of friends. Again, my sample size consists mostly of people desperate for Cutler to succeed, but not a single person I know came away from installments of “The Jay Cutler Show” liking him any less. The same goes for Cutler’s mic’d up session against the Vikings.

I know the immediate response will be that the general public isn’t tuned in to ESPN 1000 every week, and that’s something I’ll concede. The typical Cutler experience comes in exposure to weekly shoulder shrugs, stare-downs, and ball-flippings. But that’s been the case for years. Those don’t explain why Cutler is apparently more unlikeable than ever, and honestly, neither can I. For now, I guess we’re just left with a list in which Cutler sits six spots ahead of Tony Romo, a dude whose bachelor party consisted of a game of hide-and-seek. Maybe the problem isn’t Cutler. Maybe it’s what we go around liking in the first place.