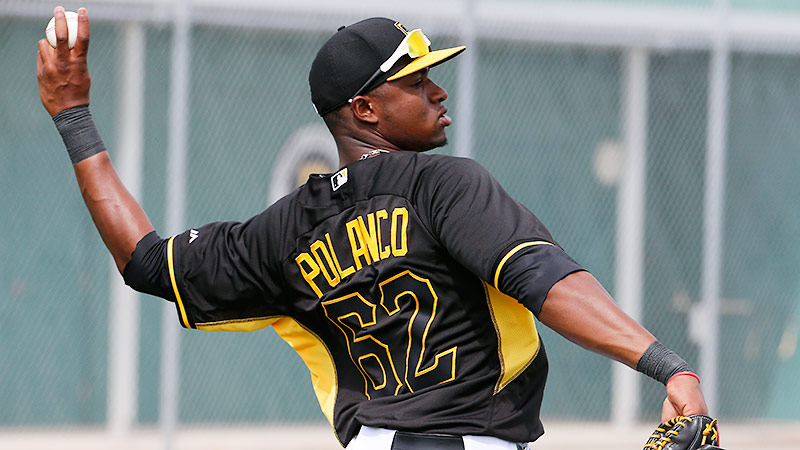 With one out in the top of the 10th inning of Monday’s season opener, the Pittsburgh Pirates found themselves knotted in a scoreless tie with the Cubs. Chicago speedster Emilio Bonifacio took an aggressive lead, and Pittsburgh righty Bryan Morris wheeled around to fire a pickoff attempt. First-base umpire Bob Davidson ruled that Bonifacio had gotten back to the bag just in time, and called him safe.

Pirates manager Clint Hurdle wasn’t so sure. Having already come out ahead on the first regular-season expanded replay challenge in MLB history, when Cubs manager Rick Renteria lost his fifth-inning appeal of a double-play call, Hurdle tried to win another review. After a two-minute delay, the umpires rendered their decision: Bonifacio was out, erasing a dangerous baserunner and wiping out a potential Cubs rally. A few minutes later, Pirates second baseman Neil Walker led off the bottom of the 10th inning. On a 3-2 count, Walker got a fastball up from Carlos Villanueva … and hammered it into the right-field seats. Walk-off, ballgame, Pirates win 1-0.

The game could have easily gone the other way. By winning one of the many 50-50 contests that teams face over the course of a long season, however, the Pirates moved one step closer to staging another rousing campaign in Pittsburgh. Which is great news, because history is definitely not on their side.

The Pirates won 94 games last season, the first time they’d logged a winning record in 21 years. Breaking that streak of losing records and ending their playoff drought required posting a 15-win jump over their 2012 total, however, and therein lies the challenge: Teams that post dramatic jumps from one year to the next almost always fall back in Year 3. According to ESPN Stats & Info, 27 teams experienced a 15-win year-over-year improvement within the past decade. Not counting the Pirates and the two other teams that jumped by 15 or more wins last season, only five of the remaining 24 teams followed up the big Year 2 surge by winning even more games in Year 3; 19 clubs regressed. Tallying up the results from those 24 teams nets an average decline of 6.6 wins in Year 3, as you can see in the table below. A larger sample size covering more years netted similar results.

First, let’s consider what we can learn from the five positive gainers in this data set. In each case, the team was able to build on its Year 2 gain thanks to breakout performances from youngsters, among other factors.

The Cubs are the most extreme example, jumping from 66 wins in 2006 to 85 in 2007, and then managing a 12-win surge in 2008. They used a flurry of veteran acquisitions to improve in ’07 and ’08, picking up Ted Lilly, Alfonso Soriano, Mark DeRosa, Cliff Floyd, Kosuke Fukudome, Jim Edmonds, and Reed Johnson, among others. They wouldn’t have pulled off such a rise, however, without getting substantial contributions from young homegrown players like Sean Marshall, Carlos Marmol, Geovany Soto, and Ryan Theriot.

The four other teams that saw positive Year 3 gains also got major contributions from young players. Before the Pirates’ 15-win jump in 2013, they also won 15 more games in 2011 than they did in 2010, then tacked on seven more wins in 2012 thanks largely to the emergence of then 25-year-olds Pedro Alvarez and Andrew McCutchen; in 2013, Alvarez made his first All-Star Game and McCutchen won his first MVP award. The 2010 World Series champion Giants got a rookie-of-the-year season from Buster Posey, a big splash from Madison Bumgarner (20), and breakout seasons from Jonathan Sanchez (27) and Sergio Romo (27). John Lackey (26) became a big contributor for the 2005 Angels, while Josh Donaldson (27), Derek Norris (24), A.J. Griffin (25), Dan Straily (24), and Sonny Gray (23) all came through for the 2013 A’s.

On Monday, I picked the Royals to win a wild-card spot and break baseball’s longest playoff drought, due largely to expected improvements from Mike Moustakas (25), Lorenzo Cain (27), and Alcides Escobar (27), as well as the vast potential that American League Rookie of the Year candidate Yordano Ventura (22) brings. When the kids flourish, rising teams can become Cinderella stories.

But what happens when they don’t? 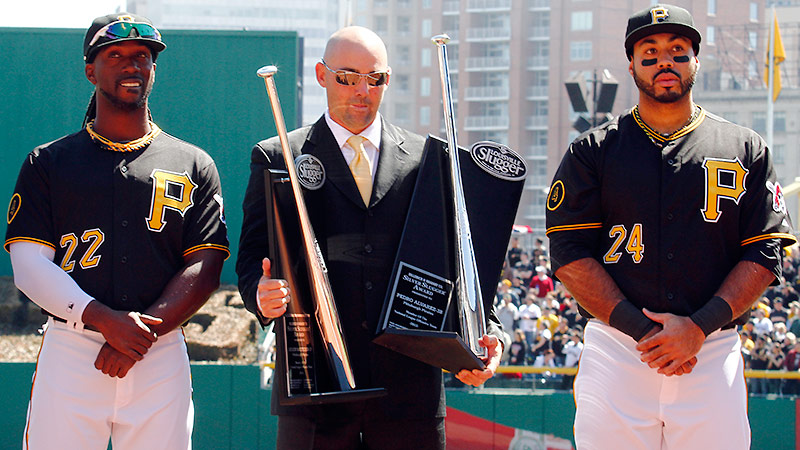 While those five teams are the exception, the rule tends to be regression to the mean. When we talk about regression, or Bill James’s Plexiglass Principle, or any similar term, this is what we mean: After a dramatic result occurs in a given direction over a certain time period — whether a week or a month or a season — the smart money is on the player or team going in the other direction once a new time period begins. Regression is abstract, but it’s also real, and it’s what the Buccos are fighting against this year.

When done right, player personnel changes can help combat the nebulous powers conspiring to turn a one-year party into an aberration. The Pirates’ offseason roster shuffling, however, doesn’t look all that promising at the moment. Many Pittsburgh fans shrugged their shoulders at A.J. Burnett’s departure, because the righty is 37 years old and because he got hammered in his one playoff start against the Cardinals last postseason, but it’s impossible to ignore the impact Burnett had in 2013, when he was one of the stingiest pitchers in the league, and even more so on a fielding-independent basis.

Burnett’s purported replacement is Wandy Rodriguez, who made just 12 starts last year. While the lefty is currently healthy, expecting him to match Burnett’s performance is a stretch. Burnett was the fourth-most prolific strikeout pitcher in the NL last year, while Rodriguez is below average in that category, and thus relies heavily on his defense. Though there are few better places to be a pitch-to-contact starter than in front of the shifty and nifty Pirates defense, that doesn’t mean Rodriguez can be trusted coming off an injury-riddled season and with his peripheral numbers eroding.

The Pirates also lost impressive late-season pickup Marlon Byrd and unimpressive fellow trade acquisition Justin Morneau, and while neither exit is overly damaging, the bigger issue is that the Bucs failed to take steps to address those losses. Jose Tabata and Travis Snider will split right-field duties, and will likely do a below-average job of it. The low-budget combination of Travis Ishikawa and Gaby Sanchez could work out decently at first base, but the Pirates certainly can’t count on it. And while it’s tempting to wave away concerns about the fifth starter’s spot, it’s important to remember that no. 5 starters pitch almost as many times as no. 1 starters, and that the Pirates won’t be able to get away with using the abysmal Edinson Volquez for long.

The Pirates have playoff aspirations, but they also have major weaknesses, which means that if they want to waltz into October again, they’ll need their kids to come through, much like the five teams discussed above. The good news is that Pittsburgh has a strong recent track record in this respect: In addition to benefiting from Alvarez and McCutchen in the 2010-2011-2012 progression, the Pirates got breakout campaigns from left fielder Starling Marte and a beastly performance from midseason call-up Gerrit Cole in 2013. Marte has already signed a long-term extension, while Cole should become the team’s most valuable starter this year now that he’s in line to pitch 30-plus times.

The great unknown is how the Pirates will address their three problem areas of right field, first base, and fifth starter. As I discussed in Grantland’s NL Central preview, however, Pittsburgh’s two best near-ready prospects happen to play two of those positions. Gregory Polanco’s not far from earning the call to take over in right. Meanwhile, hard-throwing right-hander Jameson Taillon is a prime candidate to crack the rotation, assuming he can shake off an ailing elbow that admittedly gets a little scarier with each passing day that fails to bring a definitive return date. The Pirates probably have a backup plan: GM Neal Huntington has shown that he’s willing to make aggressive moves at the deadlines to fill various holes, and given Taillon’s questionable health (and occasionally shaky command), Polanco’s limited experience (he’s played just 70 games above Class A), and the potential quagmire at first, Trader Neal’s return might be nigh.

Like the Pirates, the 92-win Indians and the world champion Red Sox, the two other teams that improved by 15 games or more last year, haven’t taken drastic steps to fight against regression. In fact, they’ve done the opposite. From a distance, the Tribe look a bit weaker this year after losing Ubaldo Jimenez and Scott Kazmir to free agency, while the Sox lost Jacoby Ellsbury to the rival Yankees. But like the Pirates and like the five positive gainers highlighted above, the Indians and Red Sox are counting on youth. Cleveland hopes that Grantland Designated Crush Danny Salazar can give the rotation a boost and keep the team in contention, while Boston has taken an even more extreme approach, shaking off the urge to top the Yankees’ gigantic offer to Ellsbury and opting against re-signing Stephen Drew on the cheap, instead giving kids like Xander Bogaerts, Will Middlebrooks, and Jackie Bradley Jr. a chance to click and stick.

That patience could net big gains in the long run for all three teams. Instead of spending big on free agents, the Pirates, Indians, and Red Sox are banking money, which Pittsburgh and Cleveland in particular need. And instead of forcing young players to scrap for playing time and look over their shoulders, all three clubs are positioning their prospects to contribute and succeed. Maybe overpaying for Carlos Beltran would have guaranteed the Pirates a playoff spot, but maybe it would have blocked Pittsburgh’s ability to get an impactful season from Polanco, the kind of young talent who’s helped other teams buck the pullback trend in recent years.

The regression monster can be all-powerful, and a bitch to tame. The Pirates are going with players too young to believe in its power, which means they might have a fighting chance.