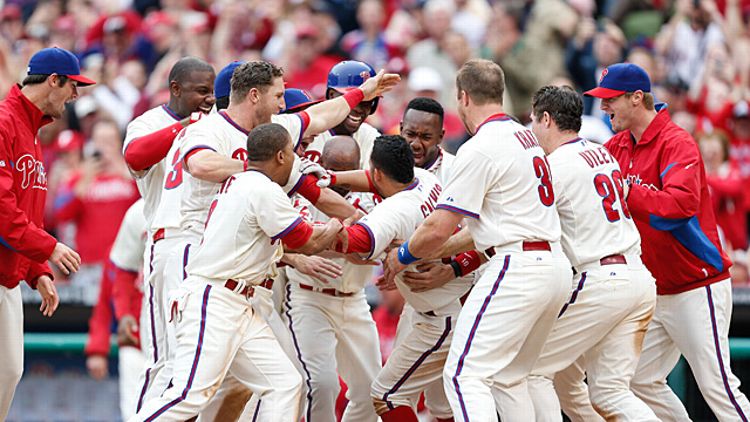 Sunday afternoon, the Phillies came back from down 2-0 to beat the Reds. That’s not particularly newsworthy on its own — the Phillies aren’t a bad team, and in a game as unpredictable as baseball, comebacks like that are commonplace.

But dive a little deeper into what happened and you’ll start to appreciate exactly how unpredictable baseball was on Sunday afternoon.

• FanGraphs posts a Win Probability chart for every game. This one looks like the first 40 seconds of a really scary roller coaster. Before Erik Kratz’s home run, the Phillies hadn’t been an even bet to win since the first at-bat of the second inning.

• It didn’t matter, because Cliff Lee immediately pinch-ran for Young (which raises the question of what, exactly, Delmon Young is good for if a pitcher runs the bases better than he does). Chapman picked him off first base. It was Chapman’s first pickoff since July 9, 2011, when Chapman caught Corey Hart wandering.

• Kratz then hit a solo home run to tie the game. Strangely enough, something like that has happened before. Of Kratz’s previous 11 career home runs, one was a game-tying, ninth-inning solo shot against Craig Kimbrel (perhaps the only reliever in the game as nasty as Chapman right now) last August 31.

• Freddy Galvis hit a solo home run to win the game. Galvis now has six career home runs over two seasons, and has never slugged .400 for a full season at any level of professional baseball.

• Because the one out of the inning was recorded on the bases, Chapman technically did not retire a batter. He hadn’t appeared in a game and failed to retire a batter since September 10, 2011.

• In baseball, there is great weirdness.