Phillies-Twins Make a Deal While Everyone Heads to the Airport 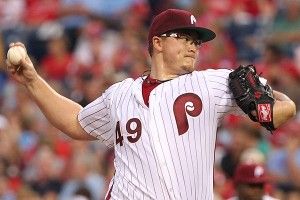 In Revere, the Phillies get one of the best defensive outfielders in baseball; only Josh Reddick, Jason Heyward, and Torii Hunter played a better right field last season than Revere per Defensive Runs Saved, and Revere should be an above-average fly-catcher in center, having moved off that position in Minnesota only because of Denard Span’s presence. Revere’s also blazingly fast, having stolen 74 bases in his first 254 major league games, with 160 swipes in 403 minor league games before that. On defense, baserunning, and base stealing alone, Revere could net two to three wins a year for the Phillies.

Which is great, because nearly every other facet of his game is terrible. He has no power whatsoever, with zero homers in 1,064 major league plate appearances. He has never walked more than 40 times in a season, including in the minors. And he might have the weakest arm in baseball. Other than speed and defense, the one other thing Revere does well is put the ball in play, with a career contact rate of 92.2 percent; only Span and Marco Scutaro had higher contact rates in 2012 than did Revere. In other words, this is early-career Juan Pierre. Given that Pierre was a 4-5-win player in his prime, and Revere isn’t yet arbitration-eligible, that’s not necessarily a bad thing. There’s upside here, especially if Revere can harness his contact hitting into a couple of Pierre-like .320 seasons (he hit .294 in 2012).

Still, the Phillies gave up a lot for a player whose upside is possibly Juan Pierre if they are lucky. In May, the Twins bagged a pitcher with a career minor league strikeout rate of 11 per nine innings. You’ll occasionally see pitching prospects rack up big K rates in the minors, without the stuff to get major league hitters out. But scouts project May as a mid-rotation starter, with the upside for something slightly better. That’s a valuable asset to have at a time when the Jeremy Guthries of the league are pulling down lucrative three-year contacts.

Worley’s a trickier projection, despite having at least some major league track record, which May does not. Since cracking the majors in 2010, Worley has struck out 238 batters in 277⅔ innings, while posting better-than-average home run rates. He has less upside than May, but is also ready now, and offers four years of team control, including a 2013 season making around the league minimum. On the other hand, he was shut down with an elbow injury in September. The consensus seems to be that he’ll be ready for spring training. But given that the Phillies just cashed in two of their best trade chips (on paper), it’s reasonable to wonder if they had concerns about Worley’s long-term durability.

Either way, the Twins are making good on their promise to add young pitching, after finishing second to last in run prevention in 2012. As of now, the underwhelming duo of Darin Mastroianni and Joe Benson will compete for the Opening Day center-field job. But Aaron Hicks, a far more promising hitting prospect than Revere, should crack the big leagues sometime next season. He’s not nearly as good a defensive center fielder as Revere is, but might end up at that spot long term anyway.

The Bourn implications are where things get really interesting. With Philly seemingly out of the market for a starting outfielder (assuming manager Charlie Manuel can hold his ambivalence for Domonic Brown in check), the Mariners become a potential front-runner for Bourn’s services. That is, if they pass on or get outbid for Josh Hamilton. Which circles back to the Rangers needing to decide if they want to sign Hamilton or consummate the long-rumored multi-deal trade that would bring Justin Upton to town. Or sign Greinke and Nick Swisher. Or any number of other possibilities, all of which remain in play as long as the offseason’s two biggest free agents remain in play. With the market shrinking for Bourn, it’s conceivable that Seattle or a mystery team might end up with one of the biggest bargains of the winter … except Bourn’s a Scott Boras client, and Boras has a long history of getting top dollar out of seemingly meager circumstances. Stay tuned.

More from the Winter Meetings:

• Many Unanswered Questions As the Winter Meetings Wind Down (12/6)