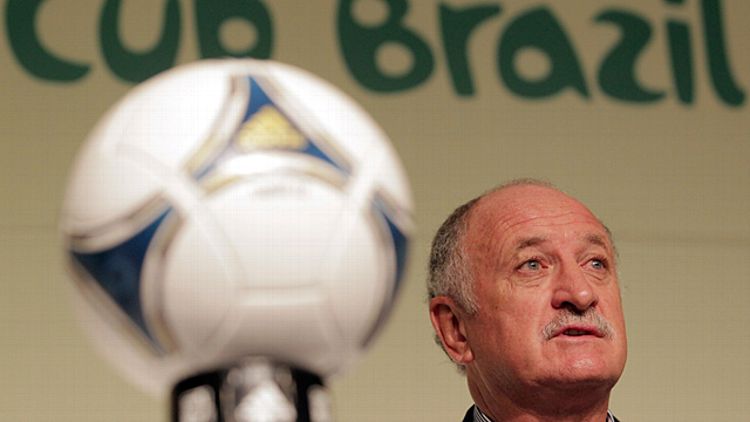 Not the job of hosting of the event, which they apparently aren’t exactly succeeding at right now, though it seems that every host nation of a major sporting event falls behind schedule on stadium and infrastructure projects. But given that over the weekend FIFA held the draw for the Confederations Cup, the World Cup’s dress rehearsal, Brazil’s host-nation status is as safe as kittens.

No, Brazil lost the World Cup competition. (An impressive feat, considering no games have been played.) They’ve already lost, because they’ve hired Phil Scolari to manage the Seleção, the national football team. Actually, they’ve rehired him.

On a cursory glance, Scolari, who led the country to a 2002 win in South Korea and Japan, seems like a solid pick. In his three international managerial stints, Scolari has won a World Cup (Brazil), been to a Euro final (Portugal), and won another regional championship of marginal import (Kuwait).

But that’s history. And there were better options. Or option, singular. Before Scolari was announced, it was rumored that Pep Guardiola was not only interested but that Brazil was the one job for which he would break his self-imposed sabbatical. Guardiola’s non-Brazilianness probably made him a non-starter (but if there were any available candidate whose résumé made nationalism an afterthought, it was probably Pep).

With their tiki-taka style of play, Guardiola’s Barcelona squads superseded Brazil’s joga bonito as the de facto standard for the beautiful game. It’s a horribly imperfect perfect example, but the one notable occasion when Guardiola faced Brazilian opposition — in the final of the 2011 Club World Cup — his Barcelona side humiliated South American champions Santos, 4-0. It wasn’t even close; after waltzing to a 3-0 halftime lead, the Catalans coasted during the second 45. Yes, having Messi, Xavi, and Iniesta helped. A lot. Still, advantage Pep.

Moreover, Scolari has been on somewhat of a downward trajectory since 2002. It’s true that after winning the World Cup, you can’t really climb any higher, but after his victory in ’02, Scolari took over Portugal’s national side and guided them to a second-place finish at the 2004 Euro and a fourth-place finish in the 2006 World Cup. On the one hand, it is a small miracle to be remotely competitive playing a 5-5-0 formation; take the Euro 2004 tournament. Portugal, the host nation, lost the final to an undermanned Greece. What’s worse: The defeat came when Scolari had his pick from the enduring players of the country’s Golden Generation (Luis Figo, Nuno Gomes, João Pinto, Rui Costa), as well as Deco and a budding superstar in Cristiano Ronaldo, and still couldn’t put his hands on the trophy.

Scolari then landed at Chelsea FC. With one of the world’s most expensive squads at his disposal, he won nothing (unless you count the Community Shield) and failed to last an entire season. So, of course, he goes to Uzbekistan. Yes, some club called FC Bunyodkor paid him €13 million to move to Central Asia. It also tried to tempt half of the Barcelona squad with piles of cash before settling on a past-his-prime Rivaldo and Denilson (and not even the Denilson whom Arsenal can’t get rid of). The stated goal of hiring Scolari was to win the very lightweight Asian Champions League, which FC Bunyodkor twice failed to do, crashing out in the quarters in 2009 and the round of 16 in 2010.

Scolari ended up back in Brazil at the helm of Palmeiras. After a series of bad league results that left his club in danger of relegation, he was fired. (Palmeiras would eventually drop to Serie B for only the second time in club history.)

Ultimately, it was really that simple: Brazil had a choice between the only person to ever win the Sextuple and an old guy who was available because he had just driven a domestic club into relegation.

The worst part isn’t that Brazil overlooked Guardiola in favor of Scolari. It’s that their decision seems remarkably similar to what Italy did in the run-up to the 2010 World Cup.

After Marcello Lippi steered Italy to its fourth World Cup crown in 2006, he retired and was succeeded by Roberto Donadoni, who, despite some early poor results, topped his Euro 2008 qualifying group, then proceeded to play some horribly dire and negative football (even by Catenaccio standards) in Austria-Switzerland.

Donadoni was sacked and Lippi brought back. He secured the Azzurri a spot in South Africa and named a squad that relied heavily on much the same nucleus (read: old players) that prevailed in Germany four years prior.

Defending his selection, Lippi said, “The World Cup is about seven games over a month, we don’t necessarily need all the players to be 24 years old. If I had to use this team over an entire league season I’d probably make some different selections. But for a month it’s not a problem.”

He was wrong. It wasn’t seven games and it wasn’t a month. Italy’s old-ish team lost one, drew two, and finished dead last in its group behind even New Zealand, the lowest-ranked side to make it to South Africa. They were sent home after just 10 days.

At his introductory press conference last week, Scolari seemed to acknowledge the youth at his disposal as somewhat of a necessary inconvenience while indicating that the old would be welcomed back into the fold: “We have experienced names who may come back into the team and contribute.”

The man Scolari is replacing, Mano Menezes, was sacked because of less-than-stellar results with a side that heavily relied on youth and unproven internationals. (A side that, it should be said, seemed to be turning a corner, despite a loss to Argentina and draw with Colombia last month.) And the concurrent hiring of Carlos Alberto Parreira — who guided Brazil to the 1994 World Cup — as the country’s technical director doesn’t give the impression that the folks at the Brazilian Football Confederation are very forward-looking. As long as they are looking back, they should really look back at what happened to Italy a little over two years ago. It might help them not lose. Or worse, draw twice and lose.

Phillies-Twins Make a Deal While Everyone Heads to the Airport