Bang in the Chubby: The Fight to Name the 2014 World Cup Ball 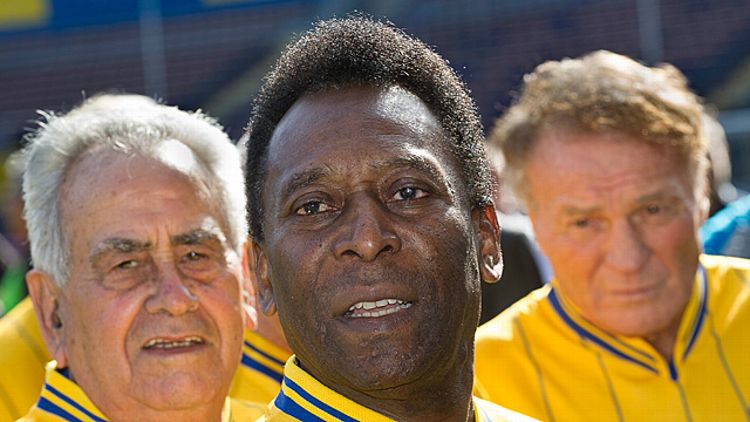 Perhaps the least surprising surprise at the heart of the traditional “handover” segment of the 2012 London Olympics Closing Ceremony — its big reveal — was the presence of the ubiquitous, loved-worldwide or just merely tolerated figure of Brazilian soccer legend Pelé, there to “embrace” the world and welcome the Games to Rio in 2016. At first incognito underneath a rakishly cocked black hat and jacket that were no sartorial match for the brilliant white duds that singer Seu Jorge absolutely smashed out of the Olympic Park, Pelé soon shed both, displaying the familiar yellow-and-green shirt of the Brazilian national team emblazoned with his name and his iconic no. 10. It was, for many, an exciting way to whet the appetite for the surely fantastic spectacle to come four years hence in a Cidade Maravilhosa, but the sight of the Seleção’s jersey on its nation’s most famous footballer was also a reminder of the not-at-all-small affair only two years away, which we all know as World Cup 2014.

Adidas has, either in a gesture of great magnanimity or total dereliction of responsibility (given how often players generally complain about the balls themselves) asked fans worldwide to “name” the 2014 World Cup ball. You were wondering: Yes, there is already a shortlist. As some news outlets have pointed out, all three potentials are Portuguese words and in the feminine form, supposedly “conforming to the Brazilian stereotype of the ball as a woman, to be caressed and cared for.” From Reuters (via The Guardian):

One of the finalists is Carnavalesca, a word describing someone who plans or participates in the country’s raucous carnival celebrations.

Another is Bossa Nova, a reference to the famous samba-jazz music genre popularised in Rio de Janeiro in the late 1950s and 1960s.

Finally Brazuca, which is a playful slang word for native Brazilians that Adidas said summed up the country’s irreverence.

These descriptions and translations are pretty wonderful — perhaps more so than some of the actual names themselves. That “Carnavalesca” describes not merely excited participants in Brazil’s traditional, almost-weeklong festival of music, dancing, and parading through streets, but even those who plan it is not only a beautiful and amusing concept but also surely satisfies all of the bureaucratic FIFA box-checking for unity of message, inclusivity, egalitarianism — all that good stuff. (It will, of course, remain to be seen whether the ticket-selling/granting situation replicates that all-welcoming message.)

Bossa nova, of course, brings to mind the greats of ’50s and ’60s Brazilian music: Antonio Carlos Jobim, Joao Gilberto, Dorival Cayimmi, Vinicius de Moraes … you could go on and on. But for Brazilians, bringing up the 1950 World Cup — the last and only World Cup held in Brazil — in casual conversation is tantamount asking them to confront a national tragedy. (Brazil lost 2-1 — in the final — to Uruguay in the Estadio do Maracana in front of a crowd that some estimates have placed at over 200,000 people.) Bossa nova as music is beautiful, fit for almost any occasion — especially a mid-summer (for those of us in the Northern Hemisphere, anyway) party like the World Cup — but do we really want to remind our most gracious hosts of their most inglorious moment? In particular, should something called a “Bossa Nova” fly repeatedly past goalkeeper Júlio César at a most inopportune time — say, a penalty shoot-out? That’s just cruel and unusual.

“Brazuca,” as its definition is understood today, can describe Brazilian emigrants to other nations — a kind of Brazilian diaspora — and is often particularly applied to those living in the United States. Again, its suggestion of community, cultural understanding, and a bit of fun seems to fall in line with the vague if extraordinarily well-intentioned message of inclusivity usually broadcast ad infinitum at massive events like World Cup or the Olympics, so I’m going to guess this one has about as good a shot as any. (I will add, though, that if any of these names could be said to already “sound like a ball,” it’s this one.)

It’s also ironic that a nation so admired for its singular, inimitable nicknaming practices (Romario, Rivaldo, Ronaldo, Ronaldinho … you know them well), a language so rich in charming diminutives (“Zizinho”) and muscular augmentatives (“Felipao”) should have Adidas ask fans take a vote from a select list of three. In fact, earlier this year there existed a grassroots campaign to name the ball something entirely different — and inordinately touching: “Gorduchinha” (essentially, “Tubby” or “Little Chubby,” in reference to the shape of the ball), in honor of the Brazilian soccer announcer Osmar Santos, whose announcing catchphrase, “Pimba na Gorduchinha!” (to paraphrase, and with a completely straight face, “Bang in the Chubby!” or “Wham in the Chubby!”) is as iconic to many Brazilians as Michael Buffer’s “Let’s get ready to rumble!” or Marv Albert’s “Yes! And it counts!” is to Americans.

Santos himself has a pretty tragic yet amazing story: a successful radio and TV commentator from the late 1970s through the 1990s, he was involved in a car accident with a drunk driver in 1994 which left him brain damaged and — for a man who reputedly could reach over a hundred words per minute while announcing — with a limited vocabulary. (Do yourself a favor and type “Osmar Santos” into YouTube: Pimba na Gorduchinha is but one of many of his linguistic creations. Also: reverb!)

Whatever the name may be, goalkeepers will almost certainly hate it, and someone, somewhere will be unhappy. One supposes you really can’t lose when you’re honoring the world’s most famous weeklong party, one of the world’s most iconic musical styles, or Brazilian culture and community as it has spread across the planet. But really though, how much fun is it to say Pimba na Gorduchinha? It can’t just be me.

Pete L’Official’s Brazilian footballing name has officially been generated by the Internet as L’OFFICIINCHA.